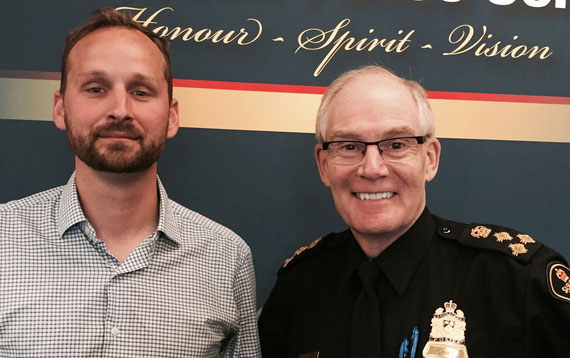 Ryan Meili: Long before I had a chance to meet you, I quoted you in A Healthy Society. You said we need to get tough on poverty, poor housing, racism, and the social issues that lead us down the road to crime.

Clive Weighill: Some politicians talk about getting tough on crime. I’m saying you don’t just want to get tough on crime, you have to get tough on the issues of poverty, poor housing, disadvantage. People are products of their environment, and if we can’t solve those social issues, we’re not going to solve the big picture in the end. I firmly believe that we have to work on poverty.

The health region did a great study on health disparity in Saskatoon that really fleshed it out, proving that when people are living below the low income mark, compared to people that live in a very affluent environment, how many more people get into drugs, how many more people are committing suicide. All of these issues are so much different when people are living in poverty than mainstream Canada.

RM: We often talk about those issues in the health world as the social determinants of health — income, education, housing — the things that make the biggest difference in whether we’ll be ill or well.

CW: They're the social determinants of crime as well. It's not hard to see across the prairie provinces — and this is not casting any blame, we have to be very careful when we talk about this — but with an Aboriginal population that's so marginalized, we're seeing the same things are happening because you have a huge population that's really at a disadvantage.

It leads to young men wanting to be involved in gangs because it gives them a place where they can feel that they have a bit of power, where they fit in, where they’ve got some kind of a future, something they don’t feel they have in general life.

RM: I’m also wondering about the other way around, the health impacts of being involved in the justice system. Once somebody has been incarcerated or charged, what do you see in terms of that affecting the trajectory of their life, whether it’s further involvement in crime or just their health?

CW: A large majority that are in penal institutions are suffering from some type of mental illness, substance abuse issues — that’s part of what’s got them to where they are. My fear is that when people are incarcerated, if they’re on remand they’re not getting any help for their issues because they’re just on remand.

If they are sentenced the programming still isn’t sufficient to help anybody get over substance abuse or mental health issues. They’re certainly not preparing people for that transition from when they are incarcerated to get them back into society. You can lock somebody up, put them away for ten years, but if you don’t give them help and you put them right back into the same environment they came from, you’re going to replicate the problem you had in the first place.

It’s hard to get the understanding of short mandates for government to look long-term at how to fix some of these issues, because they’re looking at a four-year term. They have to convince the taxpayers of what they’re doing. We’re dealing with people — people’s feelings, people’s mental health, people’s status — this is not a four-year fix.

Look at the issue of missing and murdered Indigenous women and girls. The (former) Prime Minister and his party would say that this is a crime issue. But it's a systemic issue that's causing this — it's young women that are placed in vulnerable situations because of their social circumstances. If we can't fix that social circumstance we're not going to fix the systemic problem, so we'll still be investigating missing and murdered women.

RM: There's something of a parallel between how we address issues of crime and justice, and how we address health issues, putting most of our money into the end stages: doctors and hospitals, prisons and police. How do we change that? How do we move upstream from that approach, and start to use what we've learned in health and justice to address the source causes?

We could have a family come in and say, "our son’s schizophrenic, he hasn’t been on his pills." We have to get a Mental Health Act warrant issued, we arrest him, we take him to emergency, we wait five or six hours, finally a psychiatrist comes to see him, says the guy’s OK as long as you put him back on his meds. Out he goes again, and five days later the parents are back on our door again.

RM: We talk about revolving-door prisons — there are revolving door emergency rooms too, and psych wards. And it's often the same people going through all of them.

CW: Look at the United Way's 'Plan to End Homelessness'. When you get people some proper housing and take care of them properly, you see how many fewer times they have interactions with the police, how many fewer trips to emergency, how many fewer ambulance rides. All of these things are very expensive. If you spend the money up front you eliminate a lot on the back end — big cost items.

How do you strike a balance between being thoughtful about the root causes, and also dealing with people at the moment when they've committed a crime?

CW: Well, there's a continuum. When I do public speaking I go to schools and say to the students, "you've got a lot of people in your school that are going to fall one way or the other. If you don't help them they're going to fall to the wrong side. Once you get involved in that gang life, it's pretty hard to bring you back, it's tough once you've committed and you're doing violent acts, and beating people or stabbing people and things like that. It's tough to come back.

How in the hell do you help someone like that? They say "I can't get a job, I'm trying. My past just won't seem to escape me, but I do know some guys who sell drugs. I guess I could make some money doing that."

As you've said, this means we need to look a little further upstream, looking at getting people out of poverty or making sure that people don't wind up there. What were your thoughts on the recent recommendations from the Advisory Group on Poverty Reduction?

CW: They make complete, common sense to me. It's just how to get the will of the public. They have to get behind this. I go out and do lots of public speaking and as soon as I start to talk about this — man, you'd be surprised at how many people look to the ceiling, look at the floor. They don't want to hear me talking about that. They want to hear about me locking people up, making the streets safe, getting these people off the street. They don't want to listen to how many people may be at a disadvantage, and they could need help.

Most of the people at the meetings I go to are middle class and up, and their kids are safely in school, and they've got a car and a home. I don't think a lot of them can even fathom what it means to live in a marginalized upbringing. They can't fathom the disadvantage that you face by not having proper parental supervision or the parents themselves not having the proper parenting skills. Or not having the money to live in a decent place that isn't dilapidated, that you know you can afford and stay without moving within two or three months. Or living where gangs influence your young men, of being left behind, of dealing with racism.

RM: One of the recommendations that was somewhat new in that report was the idea of basic income, of developing an income floor that meets basic needs, that no-one falls below. What do you think of that idea, and what effect would that have on some of the people that you wind up coming in contact with through your work?

CW: It would be a positive step. I'm not an economist and I don't know what would drive the economy at the end of the day, if everybody rises up to this level, if that just pushes everything to the next level. But in a perfect world we'd want everyone to be able to afford to live in stable, safe, sustainable housing. And however we make that goal happen, I'd be very supportive of that.

If that means a low income line that nobody can fall below, if social services takes care of that, I'd be in favour of that. Somehow we have to make the playing field a lot more level for everybody. Because you can't especially in the prairie provinces, leave a large segment of your population behind. It's a classic textbook study for criminologists of what will drive crime, and what will drive health costs, when you have a huge marginalized population.