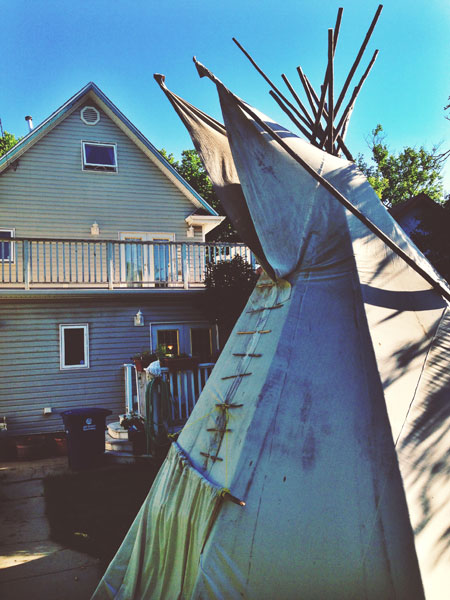 This spring I drove up five hours to visit friends in a Northern Saskatchewan Métis community. The crosses that mark the side of the highway, more frequent the further north I go, remind me that these small communities have suffered too much loss the past winter. But I don’t see that once I arrive; the community is beautiful, a hub for fishing, hunting. “The rink burned down a few years back”, Lou, a friend who has lived here for a good part of his life tells me. “Many suspected it to be arson, some kids messing around. The community sure went downhill after that.”

In Northern Saskatchewan, a rink can determine the health of an entire community. For mostly young men, sport gives an opportunity to stay out of trouble, for others it’s a pastime, to cheer on the home team and help fill the bleachers. But it’s also more than that: “dances, hockey tournaments, Mothers Day, all used to be a huge celebration at the rink and now the community does nothing.” He tells me about more young people getting into harmful activities, the same things I saw my friends get into in high school. I worry about their futures. Fundraising has been explored, but it’s not going anywhere. Another friend reminisces about watching high school games there when he was in grade 3. It inspired him to join hockey.

I get the impression from these young men, from their own experience and from the experiences of those close to them, that if you’re not picking up a hockey stick, you’re picking up a bottle.

Perry Bellegarde knows about all of this first hand. He’s served at as a Band Councillor, Chief, Tribal Chief, Chief of the Federation of Saskatchewan Indian Nations and, since December, the National Chief of the Assembly of First Nations. Being one of a few people to serve in so many different capacities has given him a unique perspective, one might even say the burden, of seeing the state of First Nations.

His reminder, “6th versus 63rd”, is a comment Federal and Provincial governments are becoming more and more accustomed to hearing. Canada ranks 6th on the United Nations Human Index; 63rd is where Indigenous communities are, among many third world countries.

This has been a key theme in many of the speeches National Chief Bellegarde gives across the country. The index, which uses health, education, and literacy to determine the overall health of a nation, shows that Indigenous peoples have the same quality of life as people in Libya, or Romania.

With Indigenous people its fastest growing population, this isn’t particularly good news for Canada. This expanding population, which could be an answer for an economy facing the mass retirement of baby-boomers, is still subject to systems and institutions that perpetuate colonialism. Colonial doesn’t just refer to the first white people to land here. It is not all about how men with mutton-chops legislated the forced removal of First Nations children from their families. Colonialism is alive today, treating First Nations as if they deserve less for education, health, housing, and safety while Canada and Canadians continue to benefit economically from Indigenous lands.

Bellegarde speaks of closing the gap that exists between Canadians and First Nations, to get Indigenous communities up to the same levels on the index as in non-Indigenous areas of the country. He’s six months into a three and a half year term, and his message is beginning to get to where it will have the most impact: to Canadians.

This country is suffering from amnesia, not recognizing that Canadian policies toward Indigenous peoples have not changed much since first contact. It’s time to try something new.

Indigenous peoples are suffering from colonial attitudes that have no place in this generation. To fix the inequalities in health we have to fix the unequal relationship, heavy on paternalism, that exists today. Only then can we begin to realize the true treaty relationship that this nation was forged on: partnership, cooperation, and a mutual respect that leads to progress and health for all.

Some may be discouraged, after seeing too many years of the same mistakes being made, the same outcomes. But this generation will build on the quiet resiliency of our parents and ancestors, and lay claim to all that Canada could be. As I write this on the café patio in a well-to-do neighbourhood, a young First Nations couple with the look of working-professionals, with matching braids, walk past while sharing a laugh.

Yes, certainly there is hope.