Andrew Hatala has been running a core neighbourhood project for the past two years, together with Kelley Bird-Naytowhow and Tamara Pearl in Saskatoon.

They wanted to explore the relationships between resilience, well-being and culture among Indigenous youth. They discovered some exciting and inspiring results from these kids — on display as a photographic and cultural experience at the SCYAP gallery, from December 3rd-18th. 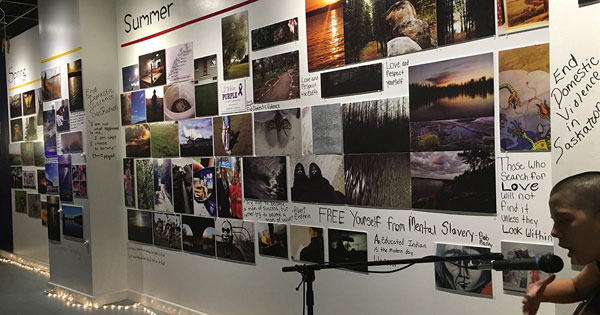 Upstream: Can you start by explaining the basic idea behind this project?

Andrew Hatala: On our official write-ups we call it "From Embers to Flames." The long title is "Identifying Strategies of Resilience among inner-city Indigenous Youth." Embers to Flames is a metaphor for the good things already going on in the community, and we're trying to fan those flames — trying to build on those strengths, so the youth have healthy futures.

U: Who are you trying to reach with the project?

AH: What we're learning about resilience among Indigenous youth has value for people serving youth populations in the community, and also organizations who want to strengthen their programs. The interviews and the 'photo voice' project we've done with youth — we hope can help shed light on that. Places like Egadz, Core Neighbourhood Youth Co-op, White Buffalo, the health region — those kinds of places are the 'knowledge users', so to speak.

Part of what we were trying to facilitate was also a conversation among youth in the city, youth who found a pathway that's led them to a healthy, productive life. We want to be able to share those stories with other youth who are still in the midst of challenges. Then we can see how youth three or four years ahead of them could help. So youth are the knowledge producers, and the users too.

U: What have you learned from the youth who've participated in Embers to Flames so far?

AH: When you sit down and have a two-hour interview with a youth, you learn a lot about their realities. Experiences of racism and discrimination, families struggling with addictions, the pressures they face to join gangs — these are the intense realities outside our front door. The youth we spoke with courageously face these challenges. All these things make it harder for them to advance their education and live healthy lives, and a lot of what they had to say points to needs that our society could help with more broadly. These are not issues that are in the youth themselves, but in society.

In terms of what helps to make them resilient, one big theme from the interviews involved Indigenous identity. Youth who’ve found a way to feel good about that identity, about who they are — those are the ones who tend to make it through the hard challenges. Things that helped them were a strong sense of culture and participating in cultural activities, like round dances and pow-wows. And culture was really connected with spirituality. Prayer, smudging, ceremonies — that kind of sacred outlook on life gave them strength, gave them a higher power to draw on when they were going through difficulties, and that made them more resilient.

Another theme involved organizations. Many of the youth talked about how CNYC is a safe place for them. Egadz, White Buffalo, those spaces too. It's connected with the value of having a mentor. Youths who had an older person, somebody who cared about them, somebody who was in a positive space and was their friend and could be a role model — these youth could see that a healthy life is possible.

Part of our goal is to showcase the amazing work that those organizations and programs are doing, because they continually struggle for funding. Our governments, city and society should offer greater support and provide more core funding rather than forcing them to apply for dozens of grants every year and basing their programming on how successful those applications are.

U: From Embers to Flames has a show opening at the CNYC gallery on the 3rd of December. What's it all about?

AH: We have 193 photos taken by the youth about their experience of resilience and growing up in Saskatoon. They're loosely organized by what we're calling the 'four seasons of resilience', because the youth involved took photos once per season over past year.

We’re hoping to bring in some aspects of ceremony because there’s a lot of thinking from Indigenous scholars about how research is a process of ceremony and connected with sacred principles. One of our ideas is to have a little pouch of tobacco for people to hold as they move through the show. Their words and their thoughts would be put into this tobacco, and we would have it burned or buried at the end of the show to capture some of those thoughts and prayers.

We wanted to bring this kind of spirit in so it’s not just photos on a wall, there’s a process, a journey, something to elevate it just a little beyond. This is important because the photos represent the youths' stories, and those stories are sacred.

Every time we did an interview with a youth we’d pray and smudge if the youth were into that, and we kept all the burnings (that came from it). We want to put that into the show as well. The photos are just a gateway, a stepping stone into the stories and experiences of the youth, and there’s a sacredness to them.