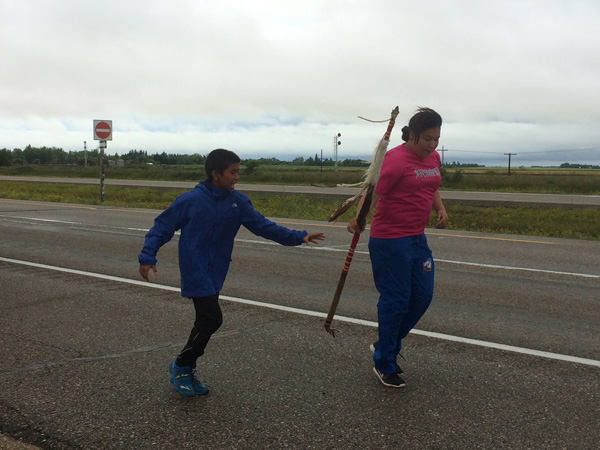 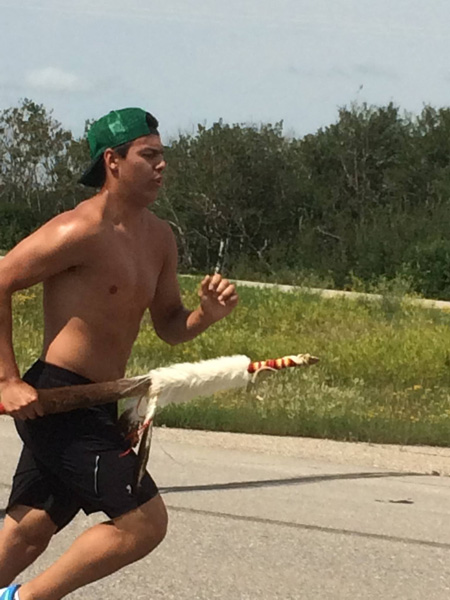 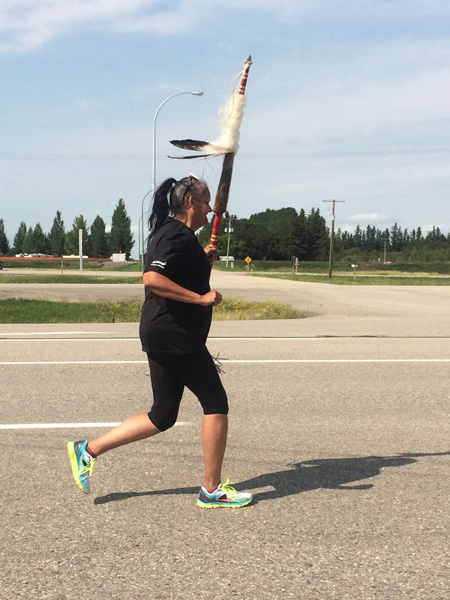 The lance run is a very sacred tradition that has been around for hundreds of years; it is only since 1996 that the lance run was initiated again.

Three elders, Sandra and Henry Felix from Muskoday and Ross Ellery from Ochapowace, supervised the journey. They smudged and prayed each morning for safe travels.

The Chief of Ochapowace, Councillor Shelly Bear, and five chaperones looked after the 16 athletes who would take turns carrying the lance.

Fifteen-year-old Ruthie Henry from Ochapowace, whom will be competing in the summer games in softball, was excited to be a part of the run and meet new people.

“It’s awesome, I like it. There’s nothing really difficult about it, it’s pretty easy and fun, everyone makes it fun. We all take turns and we don’t have to push ourselves as hard,” said Henry.

Hayden Primeau, a 13-year-old shy boy from Muskoday First Nation, was said to be very quiet and did not talk much during the start of the journey but has since come out of his shell.

Primeau said he joined the lance run so he could have the experience and be proud of it.

He will be playing soccer in the summer games for PAGC. He has enjoyed meeting new people on the lance run and said interesting things happened on the expedition.

“Every since we started running, we had a hawk follow us; the elders say it’s cool,” said Primeau.

The athletes have also got to meet Ethan Bear, who had joined the run from Regina and finished the journey with them to Ochapowace. Bear was recently drafted by the NHL's Edmonton Oilers.

Tracey Dunnigan, a Regina police officer, was asked to participate. Ever since she started the journey, she has been in awe of the athletes and the other participants.

“They never complained, always a smile on their faces. Never complained when they had to get up in the mornings and every one of them saying that it’s been fun and hasn’t been challenging when they’ve had to push themselves,” said Dunnigan.

Some runners had sustained some injuries but they kept on going because they knew the importance of getting the lance to Ochapawace.

She wanted to be a part of this opportunity to promote the positive of the youth who have showed much determination and strength because far too often the youth are seen in a negative light.

“This run has been a chance to really let these youth shine and I am proud to witness it,” said Dunnigan.

Dunnigan says the lance run has brought individuals and the communities together. The youth were very distant with each other when they had started but now you could see the difference of how united they have become.

The lance run is a celebration of achievement and reaching goals. It would take 13 days to reach their goal of having carried the lance to its destination.

The 2015 Saskatchewan First Nations Summer Games will be held at the Ochapowace Nation August 9 to 15.