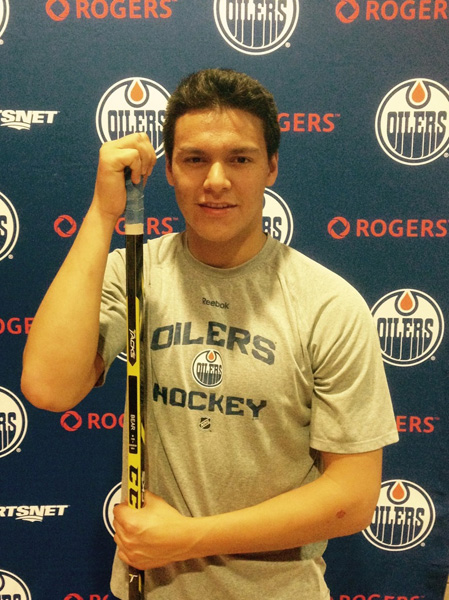 When he first laced on a pair of skates, Ethan Bear dreamed of being in the show at the NHL level. Now that he’s been drafted by the Edmonton Oilers in the 5th round and 124th overall at the draft in Fort Lauderdale, the real work begins for the recently turned 18 year-old.

Bear has had quite the schedule since being drafted and has showcased his hockey skills at the Edmonton Oilers Orientation Camp which was held on July 1st to the 6th.

“It’s been very good,” said Ethan of the whirlwind two weeks. “Ever since I arrived and met the guys, they have been very respectful and have welcomed me in a good way. I’m really happy to be here and it’s very exciting.”

Bear proudly speaks of his NHL Draft 2015 experience as he was joined by family. “My parents were there, along with my brother and two sisters, it was great having them all there. It was a very exciting time when I heard my name being called.” The Edmonton Oilers expressed strong interest in the young defenceman and had previous conversations with Bear before the big day. “Each time the Edmonton Oilers name came up, I was excited knowing that they were very interested in me,” added Bear.

Sitting at the NHL Draft is a test to the nerves for very young hockey player waiting for their name to be called and it was certainly no different for the 5’11” and 198 lb Ochapowace First Nation youth. Finally the moment came when the Oilers brass went up to the podium to call up Ethan Bear from the WHL’s Seattle Thunderbirds. “When it all happened, I think I blanked out, I can’t remember certain parts of it all as I was a too excited. It was just an exciting time for me and my family. It was very emotional for my mother and I think she was more nervous than me. I made sure I hugged her last because I knew she had some happy tears and my dad was happy,” added Bear.

The pride and joy felt in the First Nation community of Ochapowace First Nation was no doubt felt across the country by many followers of Indian Hockey. This not only puts a stamp of approval on Ethan Bear but an  encouragement to the many young hockey players who dream of playing in the National Hockey League that it is within their grasp if they are willing to put hard work and the determination of making their dream a reality.

“I want to encourage the young people to stay humble, work hard, and be yourself. Be respectful and take everything one step at a time. Keep on task and stay focussed.”

With the Connormania excitement happening in the capital city of Alberta, Ethan Bear speaks highly of his new friend, Connor McDavid, who went number 1 over-all in the draft. ”He’s a great person and treats everyone with respect. He’s a big deal here in Edmonton and that’s great. He works hard and makes everyone harder.”

Ethan Bear brings great hockey skills to the Oilers organization but also has some things he needs to work on when he goes back to training during the off-season. “The Oilers are helping me out and tell me some things that I need to work on so definitely, I will be working on those things when I go back to training in Regina to work with my trainer and skating coach.”

Having an excellent role model during his younger years has been a key factor for Bear to be where he’s at today and he acknowledges his older brother Everett who is 31 years old and played with the University of Manitoba. Ethan also looks at Carey Price and Jordin Tootoo for the inspiration provided and has stated that his favorite team growing up was the Montreal Canadiens, that is until draft day.

Proud mother Geraldine stated “We were anxious, very nervous, and when my son’s name finally got called by the Oilers – I just had tears of joys for him knowing all the hard work he’s put into his game to be where he’s at today.”

“It’s his perseverance that has taken him this far. I know when he (Ethan) does something in sports, he wants to be the best at it by putting in extra work,” added the mother.

Bear got his kick-start when he made the Canadian team for the IIHF World Under-18 Championship in Switzerland followed by the Ivan Hlinka Memorial Cup tournament. From the two international tournaments and gaining much needed skills and expertise from great coaching staff, Ethan Bear had a great year with the Seattle Thunderbirds playing in 69 games and scoring 13 goals with 25 assists for 38 points to double his previous season points total.

“I will be going back home to Ochapowace to relax with family for a few days than I will be heading to Regina to work on the skills learned at Edmonton Oilers Orientation Camp,” says Bear. With that in mind, we are certain that we will see Ethan Bear come back to the Edmonton Oilers main camp in September 2015.