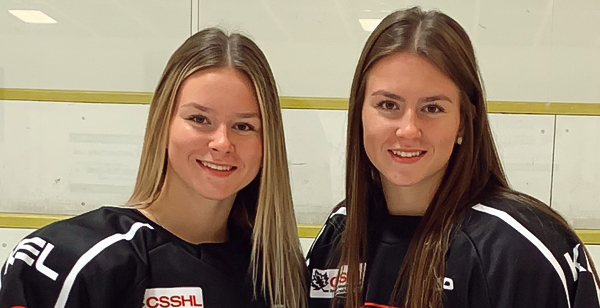 Sisters Jordyn Bear #10 and Kyla Bear #5 have earned themselves scholarships to play Division 1 hockey for Rochester Institute of Technology in New York. Their hockey highlight so far has been playing for Team Saskatchewan at the National Aboriginal Hockey Championships. Photo supplied

Twin sisters Kyla and Jordyn Bear’s hard work and dedication to hockey has paid off. The 17-year-olds have received scholarships to play Division 1 hockey with the National Collegiate Athletic Association (NCAA) Rochester Institute of Technology in New York.

Tim Bear, the girls’ father, says they have worked hard and sacrificed a lot.

“Schools only have so many scholarships to give out. It was a dream for both of them to make it to that level and the work and commitment they had to put in.”

Kyla and Jordyn are from Ochapowace First Nation just south of Yorkton.

They started skating at a young age and spent a lot of time at the rink growing up. They followed in the footsteps of their parents and brothers, Kirk and Josh, who also played hockey.

The sisters had to move away from home in order to play at a higher level.

They played hockey together at Ochapowace and on teams in southeastern Saskatchewan towns, Churchbridge, Whitewood and Melville, before playing with teams in Penticton and Kelowna.

“At first it was difficult moving away in grade 9, but keeping ourselves busy helped with it, we had friends and the academy to focus on and then it distracted us from being homesick” Jordyn says.

“The girls have sacrificed a lot to get this. I wish people knew how much hard work they’ve put into it,” their mother, Cindy Bear, said.

The pair will graduate in June and are looking forward to the next level of their hockey journey and college in the fall.

They are excited about receiving scholarships and being able to continue playing on the same team.

“The coaching staff was really good and when we had a Zoom meeting with them they actually had a virtual video walking around the rink and around the campus so we were able to get a virtual look at it,”

“This is exciting for both parents, not only the parents but the kokums, mushums, the grandpas and grandmas and everybody else that had that little bit of influence along the way to get them where they’re at,” Tim said.

Kyla plays defence and Jordyn is a forward. The sisters support and encourage each other to be their best.

“As twins they are always together, they push each other. One thing I thank the Creator for (is) they are never walking into a dressing room alone. When they have an issue, they have each other’s shoulder to lean on,” he said.

Playing hockey has given the two many opportunities.

They also took part in APTN’s show Hit the Ice three years ago, where they met Canadian Olympian, Bridgette Lacquette. She has become their mentor in their pursuit of their hockey dreams.

“She’s been there for the girls and has always been there to answer their questions or offer advice,” Cindy said.

They hope to one day play together in the Olympics.

The sisters’ the relationships with their teammates mean the most to them.

“As soon as we hit the ice we are all a family,” Jordyn says.

Jordyn and Kyla encourage girls to get into hockey or any sport.

“If you have the support or anything behind it, you should definitely get into the sports.” Jordyn said.

“It’s so much fun when you start getting out on top and being on the ice with friends you don’t know but then are soon to be best friends, like it all just comes together and it’s such a good feeling in the end,” Kyla said.

Kyla is planning on law school, while Jordyn is considering becoming an anesthesiologist.