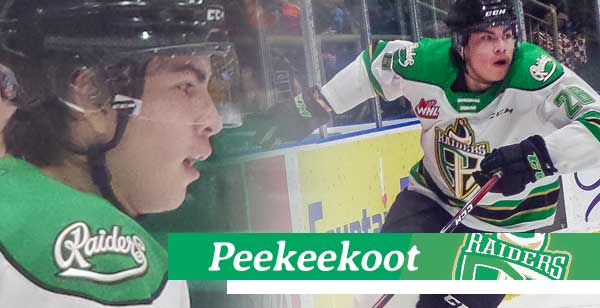 At 17 years of age, Prince Albert Raiders’ forward Dallyn Peekeekoot is doing all he can to help both his hockey team and his home community. Currently the 5’11” athlete plays for the Prince Albert Raiders in the Western Hockey League. The member of the Ahtahkakoop First Nation in Saskatchewan understands his roles both on and off the ice, and is balancing both well for one so young.

When asked how he feels about being a role model, Peekeekoot responded, “It really makes you think, when you’re on the ice and when you’re off the ice. You also want to be a good example out there. No matter what I’m doing, I don’t want to do anything wrong that might look bad for me.

When asked if this would mean less fights and more scoring, he chuckled, “Well, yeah … but even the fighting is good, though. It gives my teammates a bit of energy, and people think ‘He’s tough! Maybe that could be me someday!’”

Peekeekoot’s playing style is similar to that of NHL veteran Brandon Tanev, who is known less for his scoring prowess and more for his hitting. Peekeekoot’s scoring totals for the season so far are four goals and two assists. Akin to the National Hockey League, the Western Hockey League also had to deal with the Covid-19 pandemic.

What changes did Peekeekoot notice take place due to Covid-19? He responded, “Not much. We did more working out because of the pandemic. We were in quarantine for a couple of days, so we were sent back home for a time. It literally made a person moderate to do more working out back home.”

Certainly, with Covid-19 restrictions being lifted in Saskatchewan, it has led to hockey tournaments being opened up again. When asked about First Nation hockey tournaments, Peekeekoot enthused, “They’re awesome! They’re fun to play in! I always look forward to them because people always watch you and you see family and people you grew up with around. It’s always nice to see them, it’s a good time for visiting.”

Peekeekoot was quick to answer, “I know it can bring them out of their rez and give them an opportunity to maybe let some people watch and scout them. There’s always opportunity wherever you go and you may never know it. Sometimes it’s always there.”

After a moment, he added, “(The Senators tourney) would have been a good one to watch but (the Raiders) will be gone on the road at that time.”