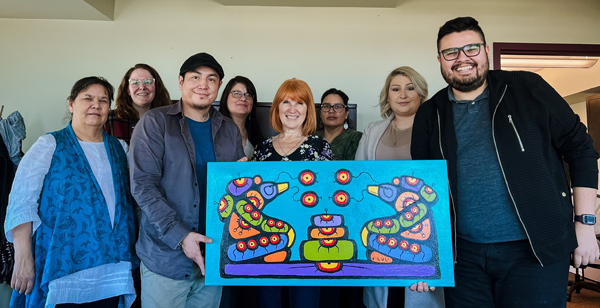 The pîkiskwêwin project is making a splash in the world of podcasts and Indigenous language revitalization.

pîkiskwêwin, a project designed to help restore and maintain Indigenous languages, has recently launched with 13 podcasts and videos exploring a wide range of topics.

The project was initiated by the Indigenous Communication and Fine Arts (ICFA) program at First Nations University of Canada (FNUniv).

“Really, it’s to create content in the languages. Not teaching content exactly, but actually talking about things (and) normalizing it,” said Shannon Avison, FNUniv assistant professor and project manager.

The first three episodes have garnered over 2,500 views on YouTube in their first month.

“When we started looking around, we realized that there was only one podcast in an language,” said Avison.

While many podcasts talk about aspects of Indigenous cultures, few do so in Indigenous languages, she said.

The podcasts are attracting a global audience, with people listening in from as far away as China and Sweden.

“Language is what’s important,” said Bird. “ has a strong connection with culture. If you’re losing your language, you’re basically losing your culture.”

He said the goal is to get people speaking their language every day even while doing day-to-day stuff like cooking.

“When you have that connection to them, it’s very helpful, spiritually and physically,” said Bird.

The project name pîkiskwêwin is the Cree word for “language.” It was chosen because the project’s home is located on traditional territory of the Cree people, Avison said.

Avison hopes the project will continue to spread outside of the province and help to create and promote more language content from across Canada.

“Our goal is to write another proposal to go wider than Saskatchewan, to expand it, so we could include B.C. languages Ontario languages,” said Avison.

She added that the project could also serve as a hub in the future for promoting other content in Indigenous languages.

Episodes can be found on Spotify, Apple Podcasts, Google Podcasts, YouTube, and at www.pîkiskwêwin.ca.