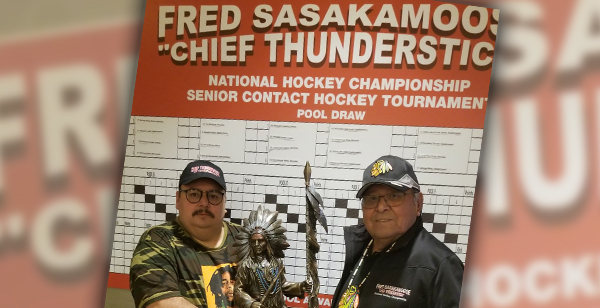 Fred Sasakamoose's family and friends often share a particular sentiment: as great as his accomplishment were in hockey, it was off the ice where he made his most important impact.

When Sasakamoose, the first Treaty Indian person to lace up skates in the NHL, passed on November 24, 2020 from COVID-19, Saskatchewan didn't just lose an icon in the hockey-verse, it lost a man who dedicated his life to making his community and country stronger, healthier and more inclusive.

For his contributions, Saskatchewan is immortalizing Sasakamoose with several distinctions – an annual day in his name, an eight-foot statue in Saskatoon and summer camp program inspired by his dedication to wellness through sport.

“It would've fulfilled his life (to see these honours). He would have figured, 'I've done lots, I've completed my life,'” said his son, Neil.

“My dad worked really hard up until the end of his life to uplift people and speak at events. He wanted his image to represent race-relations between non-Indigenous and Indigenous people. He wanted to promote people being healthy through both lifestyle and sports.”

Approved by Saskatoon City Council and the Sasktel Centre Board of Directors, an eight-foot bronze of 19-year-old Fred Sasakamoose will be placed this autumn at the front entrance of the Sasktel Centre, across from the sculpture of Gordie Howe. The statue, which will be created by Studio West Bronze Foundry in Cochrane, Alberta at a cost of $180,000, will be paid for and donated to the city by the Dakota Dunes Development Corporation, Battleford Agency Tribal Chiefs, and Synergy 8 Community Builders.

“Fred had just as much respect and leadership qualities off the ice as he had on, if not more. No one will ever match what Gordie Howe did on the ice. But with what Fred overcame, surviving residential schools to eventually make that impact of becoming the first Treaty Status First Nations NHL player, those impacts off the ice are truly amazing,” said Saskatoon City Councillor Troy Davies.

“He was a pioneer. You look at people like Jackie Robinson in baseball. That's what Fred was for First Nations people,” Davies said.

“With Gordie Howe on one side and Fred on the other, they will be like the two pillars of the building. I think we'll see people showing up to take photos with the statues.”

As well, the Saskatchewan government has decreed May 18th as annual Fred Sasakamoose Day.

To celebrate, Synergy 8 will be unveiling a 30-foot truck and trailer, wrapped with images of Sasakamoose and equipped with sporting and exercise equipment, to run summer camps at all seven Saskatoon Tribal Council First Nations. The Fred Sasakamoose Elite Athletic Sport Recreation Program will begin this summer and run over the next five years with sponsorship of Synergy 8, Dakota Dunes Development Corporation and STC.

“We want to show Fred as an example to First Nations youth, that the sky is the limit for them,” Davies said.

May 18 will also mark the release of Sasakamoose's memoir, Call Me Indian, through Penguin Random House publishers. Sasakamoose worked closely with his grandson, Zane, over an 18 month period, recording hundreds of hours worth of stories of his life from residential school student to Elder.

Celebrating Saskamoose is an honour, said Neil, but the loss of such a great man remains very present for his family.

“In Indigenous culture, you wait until about a year before you start talking more about the person. There's that period of grief, first. We are still in grief mode,” said Neil.

“We know he would have marvelled at all of this. He would have been there, shaking hands with everyone and thanking everyone. Never in his wildest dreams would he ever have imaged having a Fred Sasakamoose Day and a statue in Saskatoon.”