Hockey Night in Canada back on APTN 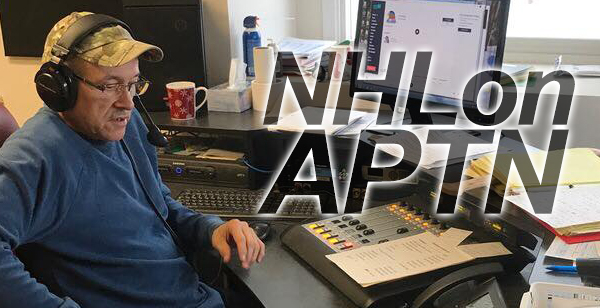 Covid -19 put a temporary damper on the excitement of Cree hockey in the 2021 season, but 2022 will see Cree sports announcer Clarence ‘Tsiboy’ Iron Saturday nights on Hockey Night in Canada from the studios of the Aboriginal People’s Television Network. (APTN)

Iron is happy to be back doing what he loves, but it’s not always easy. “I have to keep an eye on who is playing and learn their names and numbers, but I also need to practice hockey terms because I don’t use them everyday.”

Iron says there’s been a good response from a lot of Cree speaking people who appear to enjoy the sport more now that Iron is translating and announcing the plays in the Cree language. That is especially true of many elders who only speak and understand the Cree language.

“I meet a lot of elders who get really excited to tell me they really like watching hockey now because they understand me,’ laughs Iron, ‘Some of them didn’t watch before because it was all in English, so they didn’t understand what was happening. Then they heard about me doing it in Cree and now they love watching and listening to it in the Cree language.”

Iron is happy being able to use his first language while announcing hockey because he aspires to revitalize the Cree language. His goal is to motivate and encourage others to learn.

“I really want to see our people, young and old, speak and practice Cree more,’ says Iron, ‘We have to bring it back before we lose it altogether.”

The 2022 Hockey Night in Canada games were set to start in January, but those games have been rescheduled for later dates. Please check the APTN or SportsNet websites for alternative dates. The March and April dates are as follows: