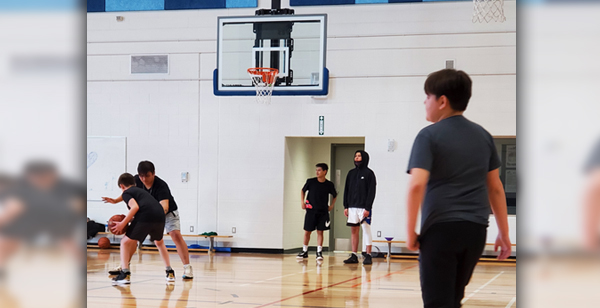 Joshua Panipekeesik in the white shorts on the court helping other youth on the court. Photo by Kerry Benjoe

Daniel Stonechild decided to change things up on the court by combining culture and basketball.

Over the Christmas holidays, he organized the FN Basketball Camp in Regina at the Mamaweyatitan centre.

Stonechild hopes this is only the start of something bigger.

Stonechild, who is both a teacher and coach at Scott Collegiate, said he wanted to do more than teach the fundamentals of basketball.

So he based the camp on the teaching akameyimoh, which in the Cree language means try hard, don’t give up.

“On the court, when you’re running and you get tired, you try hard and you don’t give up so I really wanted to emphasize those kinds of things,” said Stonechild.
Everyday the camp began with a pipe ceremony with Dexter Asapace, an elder from the Kawacatoose First Nation.

“He shared really good teachings that were life-enriching and the students really enjoyed being able to partake in them,” said Stonechild.

As a coach, he believes it’s important to introduce youth to the culture because many living in urban centres have lost that connection, so combining basketball with culture seemed like the ideal fit.

Stonechild knows from personal experience how powerful reconnecting to culture and ceremony can be.

“I had a tragedy happen to me about seven years ago where I lost a girlfriend,” he said.

It was a very difficult time and it wasn’t until Stonechild visited an elder and began attending ceremonies that he began to feel better.

“I felt that strength and healing through our culture and understanding my identity as a Nehiyaw person,” he said.

Stonechild shared his story with the youth, but the camp was a way for him to help show them what he was talking about.

“It was a good environment to be in,” he said.

Panipekeesick enjoyed learning new skills on the court as well as helping to teach the younger kids.

The camp was open to Grades 6 to 12 and one of the goals was to develop a mentorship type environment between the elementary and high school students.
Panipekeesick said the cultural teachings and lessons have already had a positive impact on him.

He hopes the camp will continue because he would like to stay involved with it.