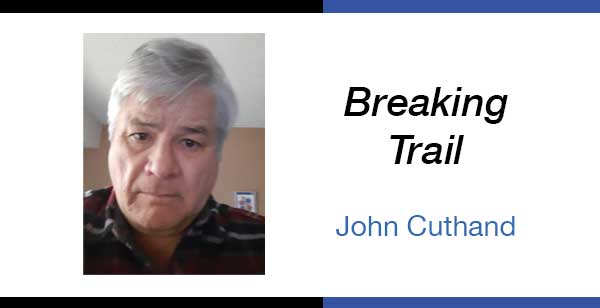 With the coming of winter in what is now Saskatchewan, the buffalo moved north into the woodlands.

The predators, including people, the ultimate predator, followed. There was plenty of shelter, wood, water, and grass to sustain the herds until the coming of spring. Winter could be cruel and difficult to endure for all living things. In early spring, the herds grew restless and began moving once again out onto the open prairie to graze upon the renewed earth. It was a cycle that lasted thousands of years.

It all ended within two centuries. The prairie became empty in winter with the near total slaughter of the great herds. The First Nations, through starvation, disease, and conquest became unwilling subjects of the British Empire. The great freedom they once knew was gone. They were now forced to follow rigid government policies over which they had no control. Most camps moved onto small reserves where their old winter camps had been. It is there, it can be said, the First Nations endured their longest winter.

When the First Nations finally, reluctantly entered into Treaty 6, they did so with the most powerful Nation on earth. The British Empire circled the globe. They colonized and controlled the land and resources of many Nations. This pattern was duplicated with the conquest of the Canadian plains First Nations. India, once a prosperous wealthy nation, was reduced to poverty and experienced a devastating man-made famine. The English imported Irish food stuffs during the height of the Irish potato famine. England could have provided relief but knowingly refused. The famine claimed so many lives the Irish population has never totally recovered.

It was within a century of treaty signing when a little-known spiritual event dramatically changed history. I remember a Knowledge Keeper from Saddle Lake First Nation sharing the story as he had once heard it.

The story tells of a time within the past century when a Cree Keeper of the great plains grizzly bear bundle dreamed he was being called upon to travel to England. It was there the great grizzly would wage war on the English lion. Wherever this terrible raging evil spirit went, it destroyed and brought suffering to many peoples.

The grizzly came to end its rule. The Keeper arrived after a long, hazardous journey. In ceremony, the great bear rose and roared a challenge to the lion. The lion arrived in a rage and a furious battle followed. The grizzly overpowered the lion, tearing it to pieces until only a small piece of its tail remained. It was then the British Empire went into decline. Country after country declared independence and the First Nations gained increasing control over their own lives. It is said a spirit cannot be destroyed but it can be changed. All that’s left of the once all-powerful lion is an annoying small piece of its tail, which wanders and brings bad dreams.