That's What She Said: The Thou Shalt Not Pass System 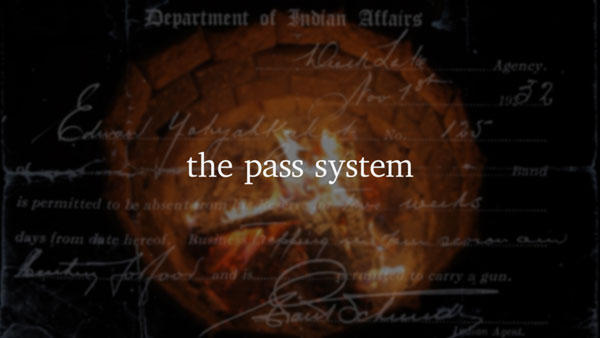 There’s a documentary out called The Pass System which talks about a shady practise that Canada probably would have buried as deep as nuclear waste if they’d had a choice.

Simply put, the Canadian “pass system” required First Nations to get permission to leave their reserve. Permission came in the form of passes or permits signed by the Indian Agent; this was a person who oversaw a reserve like a southern plantation owner, minus the genteel accent. I try to imagine how the pass system worked: you wake up and want a cup of coffee. No coffee in the cupboard. So you go to the Agent’s house and ask for a pass to go to buy some coffee. If he says yes, you patiently wait for him to write out your pass. Or, in my scenario, you lose your patience and pull out of all of your hair and then his, in an episode of caffeine-withdrawal-induced rage.

The government knew the pass system looked, at the very least, sketchy as hell, so they tried to keep it a secret, later asking the officials who administered it to destroy their passbooks. (FYI: if you’re ever asked to shred documents – don’t. They always come in handy someday.) But the government could not destroy the memories of the First Nations people who survived it. And thanks to academics poring over archives, risking eye strain and dust allergies, we also have a paper trail.

The pass system existed in western Canada for over 60 years. The system denied basic freedoms like the freedom to hunt, sell their goods or even, visit their children in the residential schools. The agent handed out the passes at his leisure and any failure to get a pass could result in fines, having your food rations withheld, and even imprisonment. I’m no expert on human psychology but giving someone unchecked power over a group of people leads to abuse or have you not heard of Kim Jong Un?

For instance, what was to stop the agents from skimming money off the profits of First Nations when they controlled access to commerce? My late grandfather William Dumont said he would sell his crops and livestock with the permission of the Indian Agent – however a portion of his funds was then withheld by the agent for “investment.” My grandpa would often say, “My money has been invested so long, I must be a millionaire by now.”

First Nations people resisted the system by going underground. People snuck off the reserve to sell their goods and labour to local farmers. But the threat of getting caught and turned into the RCMP was always hanging over their heads.

My late uncle Edward Cote was one those who bucked the system. He was 13 years old when his mom and older sister were arrested for picking firewood without a permit. His older sister had a six month old baby when she was sentenced to jail for this offence. She was aware of what could happen to a baby left in the hands of government officials - without money or resources – how could she ensure that she would get her baby back? So she gave her baby to her little brother to hide in the bush.

With the baby on his back, my uncle set snares and hunted small animals. He took the skins and traded with a local farmer for goat’s milk which he fed to the baby. He supplemented the baby’s diet with gopher meat which sounds like a tween’s idea of good baby food. He survived with his nephew at an age when I threw a fit every time my mom asked me to baby sit. (Although, one time my mom paid me for babysitting with a pony. Lesson: whining works.)

My uncle’s story had a happy ending; baby and mom were reunited. And, my uncle went on to join the Canadian Navy and represented the same country that forced him to hide in the bush with an infant.

There are people who will probably say that these things should be left in the past – probably the same people who write me emails calling me a racist when I write about race issues – but we should never forget because remembering is how we honour those who survived.

Although you could do a bit more than just remember – like maybe cook dinner for an elder? I know where you can get a good deal on gopher meat.