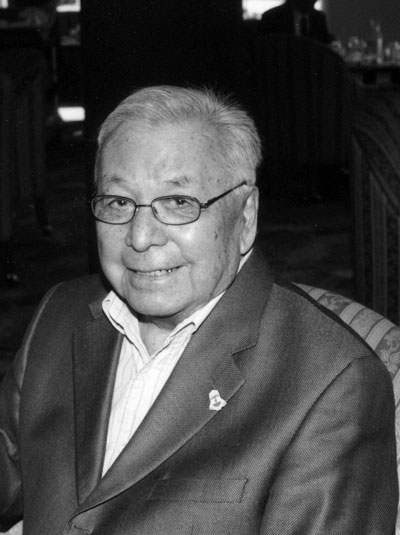 The room was full to overflowing with mourners. It was the funeral of a dear friend and colleague and we were all very sad. A young man, known for his beautiful voice, had been asked to drum and sing a song and as he walked to the front we watched him. For whatever reason, he decided not to sing but to address us instead and carefully taking his position at the podium he looked out at us then shut his eyes and in his wisest “old man” voice he began to talk. We listened in amazement as he went on and on about what he had been taught by his “elders” about grief and mourning. His knowledge was pretty thin to say the least, but he was determined we were going to hear it all.

After what seemed like hours a “very old voice” could be heard from the front row. “Holy! Ever taking advantage of us!”

The young man’s eyes flew open and for a moment you could have heard a pin drop, then someone whispered, “Yes, it's dad!” and started to laugh but quickly smothered it. The young man walked back to his seat and the Master of Ceremonies carried on as if nothing had happened while the rest of us were almost sick from suppressed laughter. The very wise “old man’ was the Reverend Stan Cuthand, known as Uncle Stan to most of us, whom he had either mentored, taught or helped in some way. Greatly loved and respected but certainly not the old uncle you ever wanted to offend in anyway.  The rest of the funeral went well and I am sure that our dearly departed has enjoyed that story each time it is repeated for it was the highlight of her funeral and one that always brings lots of laughter as each person remembers “their” version of it.

Uncle Stan who left us on May 23rd, was as Neal Macleod wrote in his remembering of him, a scholar, an intellectual and a fierce keeper and protector of  Cree language and culture. He was also very wise but in a quirky, cranky sort of way. Don’t get me wrong he was one of the kindest people I knew, perhaps Winona Wheeler says it best, “He taught us how to be brave.” Very true because brave you’d better be if you were going to ask him for advice or tell him something because he would tell you exactly what he thought with very little regard for your tender feelings and believe me, you came away wiser and often a bit bruised.  Many of us carry those stories with a sense of pride. I know I certainly like to think I am braver because he certainly never spared my feelings. But he was also generous, loving and he had a great sense of humor.

This story from Brenda Macdougall happened when she was Acting Head at the Indigenous Studies Department at the U of S. As she tells it, she invited Stan to come as the Elder to a graduation ceremony; she also invited the Wunuskewin Singers to do the honor song for the students.  She said she was seated next to him at the head table and that she was feeling pretty moved by the song when he leaned over to her and said, “That was not an honor song. Go and tell the lead singer that and also tell him never to do that again.”

Brenda said she was just sick as she wasn’t exactly the brownest person in the room and in Cree country young women do not tell drummers and singers they don’t know what they’re doing.  But Stan insisted, telling her that as the Dept. Head it was her job to let people know they can’t get away with slip-shod work so, she did as she was told. She bravely walked up to the lead singer and said, “the old man over there says that was not an honor song and that you are never to do that again.” The singers looked at her in shock and were about to say something when they saw the “old man.”  They wisely said nothing and Brenda says she was never again afraid to speak up about anything. “How could I be afraid after telling drummers and singers they didn’t know what they were doing.” She laughs.

There are many stories like this and I have been hearing them all week.  All funny and all teaching stories. Mine, although not funny happened in the mid 1980’s at the opening night of Jessica, my first professional theatre production. Jessica is a play about ceremony and up till that time no one to my knowledge had ever written about ceremony, much less questioned the teachings of elders, which is what the main character does. I was worried that I would be in trouble when I was writing it but then I thought, “Don’t worry about it elders never go to the theatre.” Well guess what?  There they all were, Stan among them, on opening night, sitting in the front row. I was so freaked I spent the night watching them instead of the play and not once did they smile, laugh or react in anyway. They just watched intently which scared me even more and I swore I would never do this again! And why did I do it anyway. I must have had rocks in my head! I was sorry, no I wasn’t! I went through every emotion imaginable throughout the play and I remember little else about that night.

When it was over and I had to come out, Stan was the first to meet me. He reached out shook my hand and kissed my cheek. “Real good.” He said. “I really liked that Vitaline. She reminds me of some old ladies I know and Jessica reminds me of myself as a young man.” I still get emotional when I think of that moment.  He led the way and all those elders shook my hand and hugged me and I knew that even if they didn’t approve of everything they supported what I did and understood why I did it.

Uncle Stan and Christine left for somewhere in South America the next week and on the plane he wrote me a letter, which I still take out and read when I am afraid. In it he wrote that he understood about how hard it is and how scary to stand up for what you believe in but he said, “we have to do it, the sacrifice is small compared to the ones made by our ancestors.” He also thanked me for not romanticizing our people, especially our old people. “They don’t deserve that,” he said. “They have worked too hard.”

Have a good journey dear friend, teacher, uncle and yes, may the road be full of singers with beautiful songs. Thank you Doug, Beth, John and Ruth for sharing him with us. And from my family he was a pretty special “old man.”