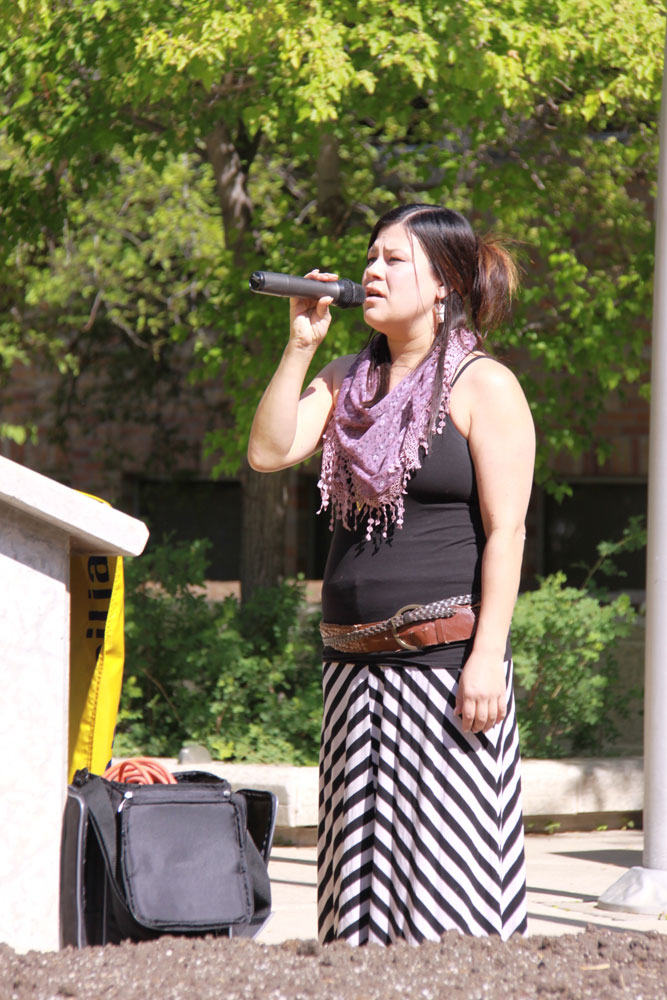 The role models throughout my childhood were old people or at least I thought they were old at the time lol.  And then, I didn’t have any in my young adult life. I was so angry, hurting and just plain disappointed with people and the world that I couldn’t see the forest for the trees. Then one day a woman twenty years older then I came along and helped me to see, and those old people popped back into my life and helped me come home. It wasn’t an easy journey, mostly because I’m not easy but the memory of their kindness, generosity, humor and common sense made the road smooth. The rough stretches and potholes were my own.

My nokoms and chapan, grand-mothers and great- grandmother were probably the most influential and even now that I am an old lady myself, they still influence me and direct my life. But who are my role models today?

They are amazing young people whose courage and understanding of the world around them fill me full with such optimism that I don’t think I will ever retire. Not only do they have all of the above attributes but they are also fiercely independent and smart. People like Pam Palmater, who went to England and at a keynote address given at the British Library, called for an apology from Queen Elizabeth. She said, “Canada has gone through a truth and reconciliation process where some of the churches have apologized for its role but we’re still missing the biggest portion of the apology, and its from the people who actually orchestrated it, representatives of the British Crown.

Palmater is the first leader ever to call for a royal apology. “Their can’t be any reconciliation, she says, until the British Crown and its people know what happened, know what the intergenerational impacts have been and take responsibility for it and apologize and do something to make amends.”

A woman like Karon Shmon at the Gabriel Dumont Institute, under whose leadership and very little money has created not only an art gallery and purchased an amazing collection of Michif art, but she is also   responsible for establishing a Michif museum as well as a virtual one and a publishing house, that has published artists and writers and produced a rich cultural library.

People like Brenda MacDougall, Chris Anderson, Winona Wheeler, Cheryl Troupe, Kim Anderson who are leading the way to new perspectives of their peoples and history.

People like Christi Belcourt and Issac Murdock who at their own expense and the fundraising of host communities have criss crossed our country bringing teachings given to them by elders, and much needed support to people who are working on the water issues Indigenous leaders and elders warned us about in the 1920’s and more recently, the grandmothers who have been leading the water walks around the Great Lakes.

For women like Liza Brown who dedicated 18 yrs. of her life to the Suntep program, helping other equally dedicated people give it a “Mitchif Heart” and who was so cruely and crudely  “dismissed without cause” for her dedication.

People like Emile Bell and Tyrone Tootoosis who over the years have never been afraid to speak truth about what is working and not working in our communities. Who believe transparency is as vital to making change, as is good leadership. Neal McLeod who with one Cree word a day is preserving an indigenous language and with it all its cultural riches for another generation.

Tyrone Tootoosis (sitting) and Emile Bell at a recent rally to protect waters.

Ruth Cuthand whose courageous art puts a face on the colonial Witiko, be it through the paintings of Small Pox or the strong images of Ghost Dance Shirts. Gregory Scofield and Louise Halfe who with powerful words on paper tell a story about our “trail of tears.”

Zooy the beautiful young woman, who works tirelessly with youth, helping them to create better lives and who sings songs of strength. Lancelot Knight with his sweet voice and beautiful guitar, Krystal Pederson with heart and talent enough for all of us, Ekwol whose powerful lyrics and images give us strength, Marilyn with her strong heart and sense of justice. Tasha with her films and Glenda’s with all her passion, love of plants and the earth. We are indeed wealthy with role models who give us pride, a loving belief in ourselves, and most especially the courage to move forward and “ as my old mentor use to say, “role models do it and they hold up their people” as they go.