I think I was about six years old the Christmas we had no snow. We went visiting our nokoms in a wagon instead of a sleigh. There were no hot stones wrapped in blankets for our feet and no rabbit skin robes to snuggle into because it was too warm. Instead we sat in the back of that wagon and bounced around until we were sure our teeth were all cracked because the road was frozen solid and the wagon had no springs. Even our rich cousins who came from the big city by car were looking completely rattled by the time we all arrived at nokom’s house. It stayed that way all through the holidays and according to my 96-year-old aunty it stayed that way into mid-January when it finally snowed, but barely enough to cover the ground.

I can’t think of anything darker, bleaker and more pitiful looking than no snow in a place as materially poor as our community was. Snow always gave it a clean beauty, making the small log cabins snuggly looking and the yards and trees sparkle in the sunlight. Funny isn’t it how lots of sunshine seems to come with a snowy winter. It also gave us children, hills to slide down and an ice rink to skate on. Every season gives us a particular beauty and rich memory but for the life of me, I can’t think of any rich or beautiful memories about that winter, just barren and poor and cold.  So this month I have been praying every single day for snow. I don’t want children to wake up in a dark, dreary, grey place especially if life is hard for them already.

Which reminds me, if your privileged I hope you’ve remembered to share that by buying some extra gifts for kids who are having a hard time. Not just gifts but also a big donation to the food bank. Times are harder this year, the number of people struggling is higher. Many young men who worked the oil patch to support their families are home and not able to get work anywhere and for the first time in their lives are having to go to the food bank.  With that comes new despairs and lots of depression. The services out there are not only dealing with old poverty they also have to deal with the new.  Okay, I’ll stop being so dreary. It’s not that I hate this Christmas I just wished it would snow.

On a happy note, I have finished the last of my baking. I just have tourtieries to make and I am done. I made Le puchin three weeks ago and it smelled wonderful. My eight-year-old great- granddaughter who is learning to make it said as she was measuring the spices. “Why do I have to learn to do this nokom nobody likes it except you.”

She’s right, none of my family likes le puchin they think it’s too sweet and sugar in their homes is equivalent to having cyanide on the table. But I give it to my brothers and all the old people I know who love it and enjoy it. When I told her this she said “But they’re all old and they’ll be gone when I grow up so who will I give it to?”

She’s a smarty pants that one but yeah; who will she give it too? Probably no one will even know what sugar is by then much less le puchin.

I was on my way home from shopping yesterday and stopped off at my favorite store, Village Green on 20th Street and I ran into Priscilla Settee. (She shops there, too). She said she popped in to see if there was any bargains but I reassured her that I got to them first. She was on her way to a book launch at White Buffalo and invited me to join her.  Str8 Up people she said were launching their third book so that’s where I spent the rest of my afternoon. 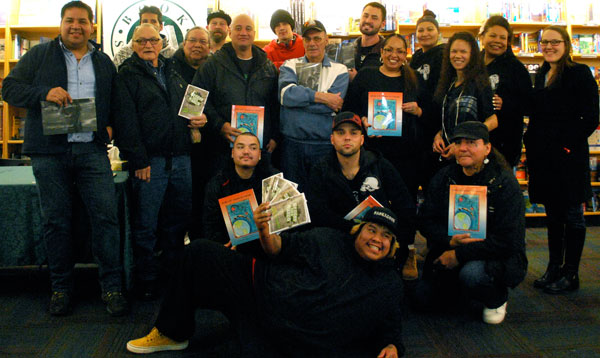 What an amazing bunch of people.  You all know that STR8 UP is an organization founded by Father Andre and two gang members serving time in the Saskatoon Correctional Centre and yes, the rest is good history.  The authors of the new book are former gang members who with the help and support of Andre and STR8 UP people have been able to leave the “ life” and begin new journeys.

Their stories remind me of my own life and how the compassion and support of even one person can change the course of our lives forever and how that change can help others also find “liberation.” It’s a hard journey becoming straight and it takes courage and every bit of strength a person possesses to just sometimes make another minute, hour and day. But it can be done and you STR8 UP people have done that in so many ways. You are all so beautiful you make me and I am sure, many other people stronger.  I wish you all a kind and gentle New Year and that only warm winds will always blow on your backs keeping you safe.

And as if all that feel good on a bleak, dreary day with no snow was not enough. I came home and switched on TV to watch the news and there was a brother drumming and singing a beautiful song. He was welcoming the new Prime Minister to open parliament and a Throne Speech that promises a new relationship between the Canadian government and Indigenous peoples.

You know something, I believe that gorgeous young Prime Minister.  I believe he will do all in his power to create a better country for everyone. But the most monumental change he has made is bringing our peoples ceremony into that place where until he arrived, has been the source of our dispossession.

He has with that act alone included us in everything making it normal and true. No one will ever be able to undo the “life force” that has been created by that act of respect and kindness.  So I went to bed feeling really great at the end of this bleak dull day. I take back what I said about no good memories when there is no snow.  Miyo Ochaytoo Kiskikow Mr. Prime Minister, and to all of us the voters, a beautiful Christmas and a Happy Kissing Day and New Year.