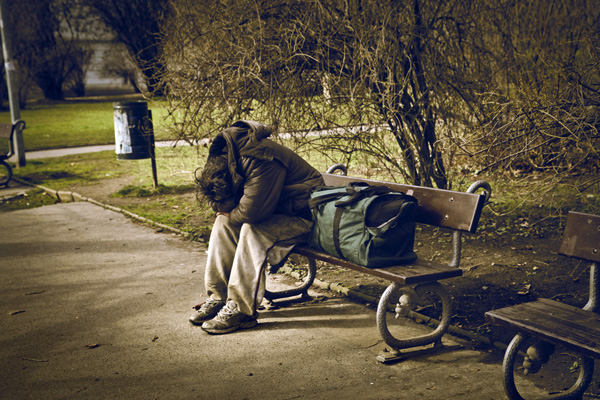 A disturbing photo of five people sleeping in a Saskatoon bank lobby was recently printed in Saskatchewan newspapers. (See the photo here.)

An earlier photo contrasted the lush yards on the east side of the city's riverbank with tents in the bushes on the west side.

Each of these disturbing images and events in one Saskatchewan city are part of a larger narrative: despite a strong economy, Saskatchewan has a deficit in access to safe and affordable housing.

But Saskatchewan isn't alone: across Canada, an estimated 235,000 people - many of them children - will experience homelessness in the course of a year, with 35,000 homeless on any given night.

Many other Canadians are struggling to maintain the housing they have; in 2014, one in four paid more than 30 per cent of their household income on housing. For these Canadians, the cost of their dwellings squeezed out their ability to pay for other essentials.

The health impacts of homelessness and inadequate housing are already well known. A 2007 Wellesley Institute study showed that homeless people in Toronto were 29 times more likely than the general population to have Hepatitis C, 20 times more likely to have epilepsy and twice as likely to have diabetes. Lack of shelter also means exposure to the elements, with risk of heat stroke in summer and hypothermia in winter, as well as violence and other risks.

Accessing safe food and clean water also become a challenge, and healthy social and family dynamics all but impossible. Managing mental health issues, addictions and other illnesses is improbable without a stable living situation.

As a result, hospitalization for unmanaged chronic medical conditions rises, as do ambulance pickups to address emergencies. The cumulative effect of these challenges has untold impact on individuals, and costs the Canadian economy more than $7 billion a year.

These illnesses and costs associated with homelessness can be prevented while still providing safe, stable housing that will allow people an opportunity to manage health issues, pursue education and employment, and develop supportive family environments.

In Saskatoon, for example, a "Housing First" pilot program spearheaded by the United Way provided housing to 10 local residents who have challenging health issues and social circumstances. In only six months, the program saved nearly $700,000 through decreased ambulance trips, hospital visits, police calls and detentions.

And reflecting the role of housing in both preventing and alleviating poverty, the Saskatchewan government's advisory group on poverty reduction recently released recommendations for a provincial strategy that would include establishing a province-wide Housing First model and strategies to increase affordable housing.

All levels of government have a role to play in making safe and affordable housing available to all.

As well as the direct development of affordable housing, cities have a variety of tools available to encourage and maintain such housing options in their neighbourhoods.

Federally, there is potential for leadership on this issue and practical initiatives such as earmarked funding for affordable housing. Canada remains the only G-8 country without a national housing strategy.

The people of Saskatoon have been rightly upset by recent pictures of homelessness. Now is the time for all Canadians to demand action from our political leaders so that we can instead become the picture of health.

Michael Schwandt is a Public health physician and Assistant Professor, Department of Community Health and Epidemiology, University of Saskatchewan. Ryan Meili is an expert advisor with EvidenceNetwork.ca, a practicing family physician in Saskatoon and founder of Upstream: Institute for A Healthy Society and Chair of Canadian Doctors for Medicare.