Thanks to MD Ambulance, the Saskatoon Police Service, City of Saskatoon Director of Aboriginal Relations Gilles Dorval and some thieves with a conscience, there was a happy ending after two international visitors who were in town for the World Indigenous Business Forum lost their passports and some very important personal belongings in a theft. 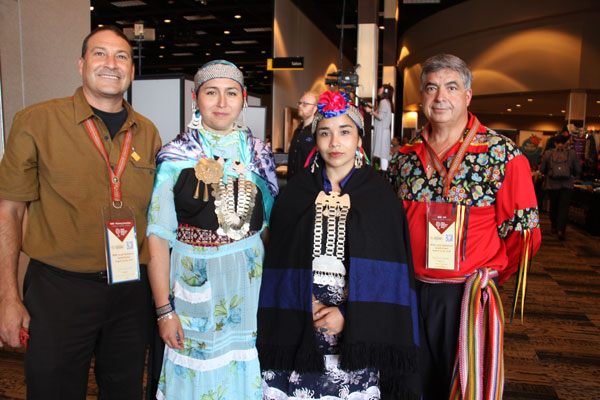 From left, Gilles Dorval, Director of Aboriginal Relaitons for the City of Saskatoon, the Mapuches religious representatives and Andrew Carrier of ILDI posed for a photo after a stressful event.

The two women were religious representative of the Mapuches First Nation of Chile and had gone over to watch the Saskatchewan Indigenous Folk Festival after a day at the WIBF. When they returned to their car, their leather bags that contained their passports and religious materials were missing. They were with Andrew Carrier who is the Chairperson of the Indigenous Leadership Development Institute, the hosts of the WIBF.  His backpack and clothes were missing too.

They found some homeless people nearby who actually had their bags...but not their personal contents. They tried to purchase back their goods but it didn’t go well. The next day Gilles Dorval saw the visitors were upset and heard their story through an interpreter.

He spoke with Sgt. Keith Salzl in the Cultural Resources Unit and they arranged for a private room for an interview as well as a translator to come to the police station.

As they settled into the room at the police station to make the statement on the theft, Andrew Carriers phone rang. An MD Ambulance crew had found their bags on the corner of 20th and 4th Avenue downtown, a nice public location where it could be found with Andrews business card sticking out of it.

The clothes were missing, but the passports and spiritual items were intact.

The actions of the police, MD Ambulance and Dorval led to the city receiving a few thank you emails from the organizers of the WIBF and a memorable trip north for our friends from Chile.

Good to see the City of Saskatoon host the world so well. The WIBF was outstanding and the City and the local organizers deserve a big pat on the back. Way to be great hosts.