2019 was one of the toughest years for the Eagle Feather News staff to come up with a News Maker of the Year. Excellence in the arts, political and community leadership, being different and being awesome and just everyday people who do extraordinary things were all on the plate for voting this year. It was close, but as you have likely seen by now, the Honourable Russ Mirasty who became Saskatchewan’s first Indigenous Lieutenant Governor edged out the rest of the competition.

What an amazing choice for the Queen’s representative in this Province. Lt Gov Merasty had a distinguished career in the RCMP and is a member of the Lac La Ronge Indian Band. The fluent Cree speaker wore moccasins to his swearing in and also when he read the Speech from the Throne. His presence in the community will only raise the profile and understanding of Indigenous people and he will also inspire a whole generation of young Indigenous people who can see themselves in an important leadership and political role. Awesome. Good and big news all around.

Following the Lt Gov, in no particular order are an outstanding group of people that had to be in the conversation for news makers. Documentary creator and educator Tasha Hubbard won multiple awards for her film "nipawistamasowin: We will stand up”. The story of Colten Boushie and his family’s path through a terrible justice system and their commitment and voice to making change, the documentary is a must see for all Canadians. The inside access Hubbard and her crew had to the process and the family brings you right back to the events in the farm yard and the excruciating trial and not guilty finding on that frigid winter evening. You shiver watching it. Powerful. Insightful. Brilliant.

Politically, Cowessess Chief Cadmus Delorme appeared on many ballots. His community excelled in multiple successful opportunities under his leadership. Green energy projects, urban reserve development and the opening of a house on reserve to bring young girls back to their community were a few of the achievements mentioned. Chief Delorme rose to prominence as a student leader at the First Nations University of Canada and he hasn’t looked back since his first election.

The most shared and read story on our website in 2019 was on Two-spirited jingle dress dancer Alex Cameron Jr.  Alex Jr. danced in a memorial dance special at BOCN’s Revitalizing the Circle: Saskatchewan’s Two Spirit Powwow – a first of its kind held on First Nations lands in Canada. He wanted to express his identity by dancing girl’s jingle dance for the Bobby Mike Memorial Dance Special. And the seven-year-old won! The picture and story went viral and was shared across the country. What was heartwarming was all of the positive comments and support for the dancer and the family. People loved his story.

People also love resilience. We posted a story two years ago about Tiffany Newby Vermette who was a crystal meth addict who turned her life around. That year it was our most shared story. This year is was our second most shared story. I think this story struck a chord because of the current epidemic of crystal meth in our communities and her story of perseverance and sobriety. People love to share stories of hope.

They also appreciate stories of giving. And really, Jim Searson gave the most important thing in 2019. He gave the gift of life. Jim donated one of his kidneys to his aunty Monica Goulet. Monica was in dire straights. She been on the kidney transplant list since 2015. Five potential donors haven’t worked out and she was taken off the list twice due to health concerns. She underwent hemodialysis for four hours three times a week at St. Paul’s hospital. Her kidney was functioning at less than five per cent. 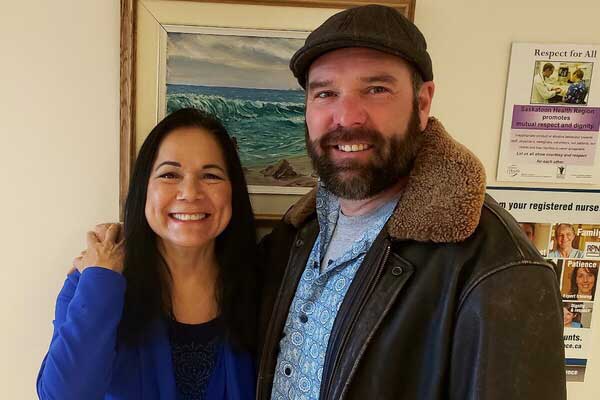 Monica Goulet and her nephew Jim Searson were two of our news makers of 2019. Jim donated a kidney to Monica and saved her life. They shared their journey through the process on social media, raising the awareness and importance of organ donation in Saskatchewan.

Monica and Jim are also very high-profile people. Monica a community builder for decades is the former Aboriginal relations consultant for the Saskatoon Police and Searson, who is married to Lac La Ronge Indian Band Chief Tammy Cook-Searson, is a community coordinator for Red Cross and a Canadian Rangers Patrol Group commander. Close to a year ago, he said he woke up one morning and decided to donate his kidney to his auntie because it felt like it was what he was supposed to do.

The surgery happened in March. Both are still recovering in their own ways. These things aren’t easy. Importantly, both of these leaders used this donation to raise awareness of organ donation need in this province, and their advocacy elevated the issue into many conversations. Social media was alive with their story of giving and healing. It was entirely uplifting.

Congratulations to all of our news makers this year. Thank you for allowing us to share your stories. We look forward to highlighting many more in the years to come. Merry Christmas.