Life in the Big city 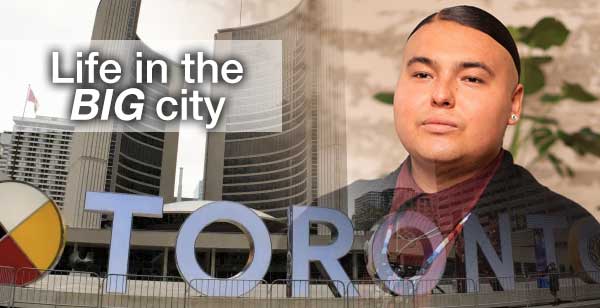 Recently, I moved to Toronto to work for The Toronto Star (The Star) as one of just two Indigenous reporters in the newsroom amidst a sea of established journalists and editors. It’s not easy moving to a ginormous city, especially coming from a Saskatchewan rez – a place where I was raised among relatives.

But I hope being open about this transition will let other Indigenous peoples know it’s OK to take big steps and there’s nothing wrong with following your dreams.

“I became a true nehiyaw when I realized the universe is my home and not just the reserve where the government put my people,” said an Elder at First Nations University during my first semester at the school.

In those days, I was young, ambitious and struggling emotionally. I carried, and sometimes still hold, the same baggage too many Indigenous students carry – Intergenerational trauma, self-doubt, and a strong sense of imposter syndrome.

Just the other week, I walked into the newsroom of The Star for the very first time.

I panicked and instantly felt insignificant and like I didn’t belong. I began to create scenarios in my head of being gossiped about by my people, the hatemail I would receive from the public, and the mistakes I would inevitably make.

It was then I had to remind myself of the words the Elder shared.

I see his words as a message from the spirit world telling me not to limit myself and to dream for our ancestors who never had my same opportunities.

But don’t get me wrong – I am not writing to save anyone or act like I have the answers.

As a nehiyaw, I want to be genuine, do deadly things, and show people it’s OK to embody that.

I landed in Toronto on Sept. 14 during the night. Immediately, I noticed the air felt different from home – more humid, more industrialized.

Friends picked me up and, although it was late, there were people everywhere and the city lights were mesmerizing. I had been to big cities before to attend different conferences over the years so it wasn’t too much of a shock.

But this time I will live here for a while.

I do miss the quiet of kookum’s house on the rez, where my loved ones live. I also miss the lodges, the songs, the feasts and everything else, but sometimes we have to make sacrifices in life to pursue our dreams.

My first piece for The Star was an accumulation of profiles on Truth and Reconciliation Day featuring young Indigenous leaders currently living in Toronto, asking what “reconciliation” really means to them.

To my shock, it made the front cover and was well received by the Indigenous community over here.

The 47 hours of work was well worth it because I made deadline.

I am grateful my editor rewarded me with some time to catch up on my sleep because one hour of sleep was not cutting it.

It’s weird to think this rez kid has the potential to work for the most extensive distribution newspaper in all of Canada.

That is something I have yet to embrace fully.

With this first experience under my belt, I’m learning what it takes to do this job. I know, by watching others, there will be more stressful and trying days yet to come.

Sweetgrass is becoming my most powerful tool, and smudging every morning is grounding me amid the pressure I face.

I hope you can follow me as I learn and write about it. I want nothing out of this column but to encourage people to tell their stories and be honest. So, this is me. This column is just a sliver of what I have to say. Here you go and take what you need.

Jamin Mike is Willow Cree from Beardy’s and Okemasis Cree Nation who is pursuing a career as a journalist. He is currently a reporter at the Toronto Star and is the latest Eagle Feather News columnist. Jamin invites readers along his journey of growth and career building in his column about being an Indigenous reporter from the rez working in Toronto