The Dashing Chronicles: On racism in Saskatchewan

John L.: The slaying of Colton Boushie allegedly at the hands of Gerald Stanley revealed the dark side of Saskatchewan. A Saskatchewan where racism is alive and, from all appearances, doing well. Here to comment is Eagle Feather News’ Dirk “Don’t Taze Me Bro” Dashing. Dirk, is racism alive and well? 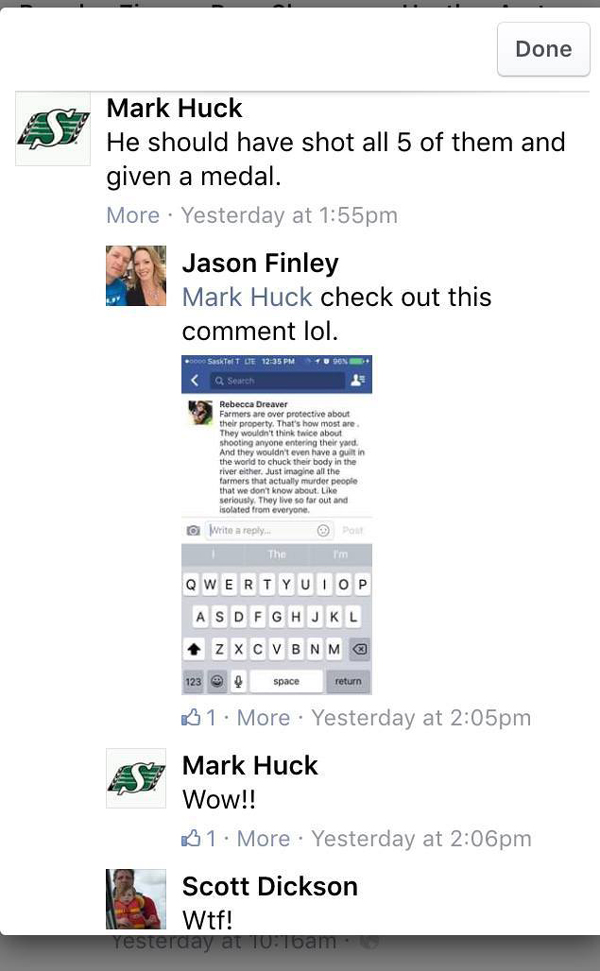 An example of the racist comments that surfaced after the killing of Colten Boushie.

Dirk: Racism is indeed alive and well in this province, John. But before we delve into that subject I want to acknowledge the class of the Boushie family. When most of us would spout rage and maybe even entertain dark thoughts of revenge, the family responded with gestures of peace. Classy, John.

John L.: By everyone’s account Colton was a decent, hardworking young man, and respected in his community and everyone that knew him. And you’re right Dirk, the family took such a courageous stand, and chose to honour his memory.

Dirk: Had I been in their shoes, John, I would have gone down a dark path, spewing colourful descriptions of racists as pitiful, evil creatures.

Dirk: Personally, John, I would have literally blown the last fuse in my massive, computer like, um, brain thingy that controls sensibility and diplomacy. I can feel it now…

John L.: Dirk, please, you’re not talking about a repeat of the Helskinki Indecent are you?

Dirk: That’s right, John. I would have described the senseless shooting as an act arising from pure, seething rage. And rage-aholics are so freaking small, what with their shallow, dark, glazed eyes, and low, slanting foreheads so ideas like compassion, foresight and common sense are more likely to slide safely away from their diminished brains…

Dirk: …for theirs is a world of easy, empty answers, where their failed miserable lives are never their fault even as they conceal in their hearts dark, malevolent fantasies of righteously righting imagined wrongs, of being heroes in the style of Hitler, Trump and the boring, helmet-haired Harper.

John L.: Dirk. I need you to, as the youngsters are saying today, “chillax.”

Dirk: Dude, you just made yourself old just now. But I did not go there. I did not say those things because, John, I am a peacemaker. I’m lover not a fighter.

John L.: Thanks Dirk, I think. At the risk of opening up the same can of worms, what do you make of the legions of Facebook “Likes” that Gerald Stanley got for killing an innocent First Nation man?

Dirk: Y’know, the wonderful thing about our people is our embrace of technology. Screen shots of all the people Liking the act were taken. And all the hate filled, vile and adolescent supporters of the killing of First Nation people were captured for eternity. Their places of employment are being notified, creating unease and unwelcome consequences. Sweet justice, John. Sweet.

John L.: I suppose there is some justice in that, and people are being held accountable. But is the situation really that bleak? Is racism that rampant in Saskatchewan?

Dirk: John, I talked with none other than Winston McLean, a first rater cross cultural awareness trainer. He tells me, that in his 20 years of doing his thing, he only encountered 3 instances of blatant racism. When audiences learn the history why things are the way they are, they come around.

John L.: Personally, it is good to hear there is hope. Perhaps, as more and more people learn we will create a safer and sane Saskatchewan. Perhaps that’s part of the legacy we should help create for the Boushie family.

Dirk’s last column, “Men and the Missing and Murdered Women’s Inquiry”, created a stir. There were complaints.

For the offense created, Dirk and his writer, Winston McLean, regret the bad feelings.

Related: Letter to the editor: Column on MMIWG hurtful and reckless

Dirk is not done with this topic.

Still, Dirk, for all his alleged insight, he makes mistakes. Write me.