Indigenous education is radically shifting across the country, and quickly.

Instead of crumbs, Indigenous peoples are determined to deliver to their children what the treaties promised — an education that honours their future. To deliver an education parallel with  the rest of Canada. 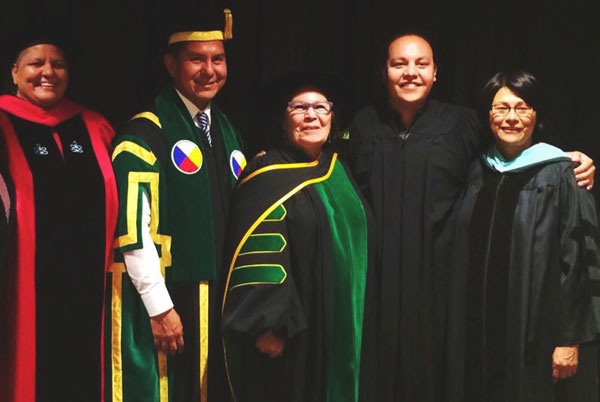 Two children begin school on the same day, of the same year. One's family has ties to this land since time immemorial. The other's family arrived here three or four generations ago. They both share a love for science and art. They both anxiously wait for the recess bell so they can explore, play and laugh. More than a decade later one will have a high school diploma that will open the doors to higher education, employment and a sense of accomplishment. The other will have prior convictions, a hard time adjusting to life outside a correctional facility, and very few options ahead of him.

This is a very real story that repeats itself each year in Canada, on the first day of school.

An educated nation gives its children a great gift: the promise of building on what they have inherited. A strong education can lead to economic and physical well being — it's clear why it's a social determinant of health. But First Nations children have gone without that promise for generations.

The dropout rate for Indigenous students is four times higher than the national average, according to the C.D. Howe Institute. Reserve schools are underfunded and often lack basic resources like libraries, science equipment, extra-curricular activities and art programs. A First Nations student is more likely to end up in jail than to graduate from high school. This is the reality for Canada's fastest growing population. We are in an education crisis, which is also a public health crisis.

Indigenous youth will make up 40 per cent of Saskatchewan's school-aged population by 2020, and this number is projected to continue growing. Similar demographics are true for other parts of Canada. The success rate of Indigenous students in the current education system is reason to worry.

It's becoming more widely known and accepted that the history of education for First Nations is not a happy one. The residential schools that government and churches ran often didn't deliver any useful information or skills, and were devoid of any real learning. Instead they provided violence, trauma, brainwashing and genocide.

There is a direct line connecting what happened in residential school and what we are seeing happen to First Nations students today.

We need to debunk the myth that First Nations didn't have complex and valuable systems of education pre-contact, because Indigenous knowledge still isn't recognized in many classrooms. Indigenous knowledge must be realized, incorporated and utilized in all subject areas for all students. If not, Canada may be headed toward confrontation. This place is home to a very young and thriving First Nations population, but they are being undervalued and underserved by the existing education system.

Canada desperately needs Indigenous-led solutions to this crisis, before another generation of potential is lost. First-generation, post-secondary educated First Nations peoples have recognized this. They are responding by introducing land-based education rooted in Indigeneity, and in a relationship to land and environment.

Dechinta Bush University uses the land as a foundation to learn about politics, law, art, ecology and much more, through a frame of decolonization. They do this while earning university credits through partnerships with Yellowknife's Dene First Nations and other Indigenous peoples of the North. Faculty members Leanne Simpson and Glen Coulthard offer a better explanation here of why an institution like this is crucial for decolonization and healing.

Dechinta isn't alone. The community of Akwesasne has a cultural restoration program focused on giving young people all that they don't receive in the Canadian education system: knowledge of land, language and culture. To re-instill land-based practices in the community is crucial to any community serious about including decolonization in their children's education.

The idea of an Inuit university has recently been discussed as well. Providing Inuit youth an opportunity to seek their traditional knowledge and receive a degree without having to leave their territory would drastically change the opportunities that currently exist for students in Nunavut.

The First Nations University of Canada is an example of an Indigenous-led institution that focuses on academic achievements, and getting degrees into the hands of Indigenous students while providing space for language, culture and First Nations perspectives. It has unfortunately been struggling these past few years, but with a new president with a strong vision, there's hope for FNU to reach its potential to become a landmark for Indigenous-led research, ideas and achievements.

If led carefully, it could become a blueprint for blending Indigenous pedagogy within a Canadian institutional structure.

Indigenous education is radically shifting across the country, and quickly. Instead of crumbs, Indigenous peoples are determined to deliver to their children what the treaties promised — an education that honours their future. To deliver an education parallel with the rest of Canada.

A curriculum meaningful to Indigenous students will teach the names and lives of treaty signatories alongside the fathers of confederation. It will teach pre-contact alliances, not just the Magna Carta.

Indigenous peoples are creating the future our ancestors wanted for us. The way forward is not through assimilation into Canadian culture and whispering our knowledge down the generations. Dreaming healthy nations is bringing the oldest stories, the language, and the kinship ties to be shared proudly alongside a broader curriculum.

I offer these remembrances of the work that has already been done so that it can be built upon.

Two children begin school on the same day, of the same year. One's family has ties to this land since time immemorial. The other's family arrived here three or four generations ago. They both share a love for science and art. They both anxiously await the recess bell so they can explore, play and laugh. More than a decade later, they have the same opportunities, the same chance to make great contributions for the benefit of us all.

Max FineDay is a nêhiyaw activist from the Sweetgrass First Nation. He is passionate about youth leadership development, theories of change making, and increasing the accessibility of post-secondary education. Max is currently based in Ottawa and can be found on twitter, @MaxFineDay. This article appears courtesy of Upstream.