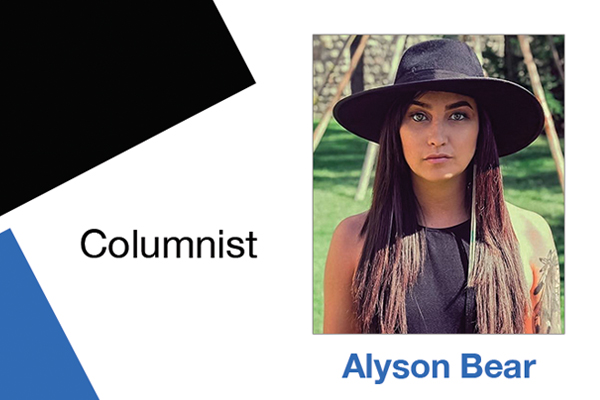 “Art is a powerful device that can generate resistance, reflection and understanding.”

This quote comes from Jeffery G. Hewitt and his article titled, “How Indigenous Art Is Challenging Colonial Law.” As an Indigenous woman, a Dakoya-Winyan – it is difficult to conceptualize the law into narrow categories, but this is how colonial law is studied and applied. Different categories of colonial law such as, criminal, family and business are considered their own categories and yet Indigenous law is established on the basis that everything is interconnected.

Indigenous law itself is not formally recognized within the confines of the colonial legal system and courts and this is the first mistake.

While appropriation can be regarded as the unauthorized taking of elements of a culture foreign to one’s own, cultural appropriation erodes or degrades cultural identity and threatens diversity.

Indigenous law is written on the land, lived in ceremony and can be captured in Indigenous art. Indigenous art hold stories with spirit and that is why our historical artefacts should be returned and non-Indigenous people today should honour and recognize the harm that is caused by appropriation.

Traditional songs, art, dance and stories, form a living body of knowledge that is passed on from generation to generation. From an Indigenous perspective, there is a clear intersection between art and law. There are serious implications that can transpire from exploiting something that is sacred. It is also known that not every song, dance, story and ceremony is meant for everyone. We come from our own traditional governance systems that were governed by clans and societies, where we were gifted things that were meant for us and our journey.

This whole concept that everything is for everyone and anyone is a colonial concept that is foreign to this land along with colonial laws. Cross-cultural influences are known to be used in art and they enrich our world, but there is a standard of respect that needs to be addressed and applied. Wearing headdresses, claiming sacred objects and designs are governed by protocols and permission that needs to be granted before using or appropriating and creating personal gain from traditional culture.

There are also many examples of Indigenous legal orders incorporated in art, such as the Two Row Wampum Belt. The Haudenosaunee and Dutch made an agreement regarding how they were to treat each other and live together. The Haudenosaunee presented the agreement using two purple, linear rows running the length of a wampum belt. “In one row is a ship with our White Brothers’ ways; in the other, a canoe with our ways. Each will travel down the river of life side by side. Neither will attempt to steer the other’s vessel.” This was a nation-to-nation treaty in which the Dutch adopting Indigenous legal protocols affirm this historic treaty.

I believe the future is rooted in art and the art that our people continue to create. The beading is healing, the songs are healing, the dances are healing and so are the ceremonies. This is something that is not for everyone and should not be appropriated and therefore should be protected. There should be protocols and permission that is granted to those who want to learn and know more, but the problem is that damage has been done through colonialism. This harm that has been inflicted is ongoing and has dismantled Indigenous systems, culture and language.

There is a lot of work to be done and I do have hope in the initiatives and leaders of today and tomorrow. Protecting what we have for future generations is vital for the survival of who we are and therefore our identities, who makes us who we are and gives us purpose and belonging.

Everything is interconnected and if you see authentic Indigenous art whether it is a painting, sculpture, songs or ceremony this is something that is evident. The evolution of Indigenous art will transpire into an evolution of Indigenous law as all things are interconnected. The more we take back who we are and assert it in spaces, the more understanding and respect we should have for one another. This is about sharing, not about taking and therefore the protection of what is sacred should be at the forefront for future generations.