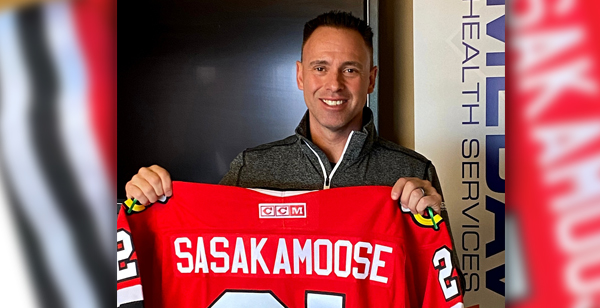 City of Saskatoon Councillor Troy Davies with a jersey of the legend Fred Sasakamoose. Fred will be immortalized with a bronze statue that will reside across the entry way from Gordie Howe, a fitting tribute for a legend. Photo supplied by BATC

The first Treaty Indian to play in the NHL, a beautiful person who gave back to the community in so many ways, is being duly honoured this month. The Province of Saskatchewan has named May 18th Fred Sasakamoose Day, the same day the book on his life “Call Me Indian” is released. And fittingly, that day there will be a ceremony announcing an eight-foot bronze statue of a 19-year-old Freddie will be joining Mr. Hockey himself, Gordie Howe, in front of SaskTel Centre in Saskatoon as a lasting tribute to this Indigenous legend and trailblazer.

Team Canada Under-18 was led by dynamic First Nation player Conner Roulette. Brigette Lacquette donned the Maple Leaf for Team Canada at the last Olympics. The Bear sisters, Kyla and Jordyn from Ochapowace First Nation are off to play Division 1 college hockey in New York. In the WHL bubble in Regina you heard a lot about Roddy Ross, goalie for the Regina Pats and Philadelphia Flyers prospect and rookie sparkplug Dallyn Peekeekoot of the PA Raiders. The list could go on.

They will also launch the Fred Sasakamoose Elite Athletic Sport Recreation Program that will see a mobile training centre go to member First Nations of the Saskatoon Tribal Council to run summer sports camps. That means even more young people hooked on sports and the ever-lasting benefits one gets from being on a team or challenging oneself in an individual way. Kudos to Saskatoon City Councillor Troy Davies who is a member of Synergy 8, one of the charities sponsoring the mobile centre, and was also instrumental in the dedication of the statue at SaskTel Centre. Great allyship.

And the roster will grow in hockey now that Courage Bear, an elite level hockey player and coach in his own right, is kick starting the Indigenous Sports Academy, a training and education program for elite level Indigenous hockey players to get coaching, competition and exposure to scouts and big games like they have never seen before. The legacy of Mr. Sasakamoose will continue to grow and that means more healthy happy people, just like Freddie was. Excellent.

Well hasn’t this project turned out to be a revelation. The sites were originally set up to be culturally safe to encourage Indigenous people to come and be comfortable getting a vaccine so we can beat Covid-19 back. The centres have done a great job of that. But the welcoming attitude and ability to provide vaccines to essential workers like police, fire and teachers in Saskatoon has turned this story into one of the Tribal Councils being lauded. Non-Indigenous people are praising the experience on social media and sharing pictures of the gift box of safety and cleaning supplies they received. The BATC site was innovative and took left over vaccines out into the community and delivered vaccines to homeless and other vulnerable people down by the river.

Many are saying this is reconciliation in action. That’s the wrong way to see it. The Tribal Councils are just showing ordinary Saskatchewanians, that have never had much interaction with them, how caring, welcoming, and hospitable the Indigenous community is. That is a good thing, but not reconciliation. Really good to watch. And hey, go get your shot. Hurry.

This is one of the most important Métis Nation-Saskatchewan elections in ages. Lots of info out there for you to make your decision. Check out the Eagle Feather News candidate’s forum, live online and on our Facebook on the evenings of May 18 and 19. The president and vice president candidates are on the 18th and the secretary and treasurer positions on the 19th. Please vote.

And please be safe and vigilant. Peace.