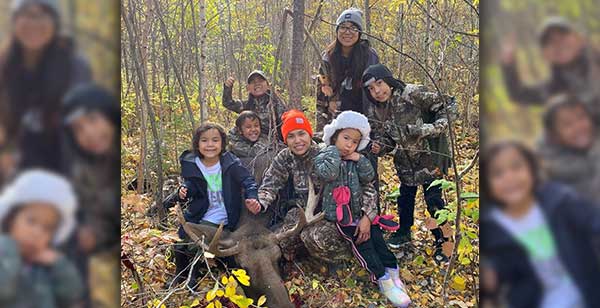 Nestled in the Saskatchewan boreal forest and surrounded by several large bodies of water, Pelican Lake First Nation has a rich history of culture and tradition, particularly when it comes to hunting, fishing, and forestry.

Destiny Thomas, a 29-year-old born and raised at Pelican Lake First Nation, is tasked as the treaty, language and culture catalyst, responsible to preserve and foster that important history on her home reserve.

“So we are that plug-in for the kids to get reconnected with their culture.”

As treaty, language and culture catalyst, Thomas provides resources on the treaties, Cree language, and culture for teachers in the elementary and high school, as well as members of the community. Based on requests from teachers and the community, Thomas will find speakers, experts, and Knowledge Keepers who can instill cultural practices in the young people’s lives.

In the last year, she has also helped organize events like an ice-fishing derby, and a “moose camp,”  where students from the elementary and high schools engage in land-based learning.

“They learn a lot. The kids learn to respect the animals that they hunt and fish. They learn about harvesting animals. And, they just learn a lot of respect for everything around them,” she said.

Culture was woven into her life from an early age, said Thomas, who was raised by grandparents who took her regularly to sweats and cultural ceremonies. But her immersion into culture faded in her teen years after her grandfather passed. She felt disconnected, she said, but everything fell back into place when she began studying pre-language literacy at the First Nations University of Canada in Regina.

Her rekindled passion for her culture and her home community makes her job extremely rewarding, she said.

“Just being a part of the community, working for the kids, and coming back to my home community after 10 years. Making those connections and bringing culture into the community, it means a lot,” she said.

The gig isn’t without its challenges though. As Pelican Lake is a very religious community, some parents are hesitant to allow their children to engage in cultural practices, she said. It’s about communicating with parents but not overstepping their wishes, she said.

Thomas plans to soon pursue her Masters of Indigenous Language Education so she can teach in Pelican Lake. Until then, she continues to do whatever she can to enhance the culture and lives of those in her home community.

“The kids are creating their own Cree dictionaries, and really connecting with language,” said Thomas. “I want the students involved in any way they can. Singing, dancing, anything that’s part of who we are.”