The Truth and Reconciliation chat with Evan Herman 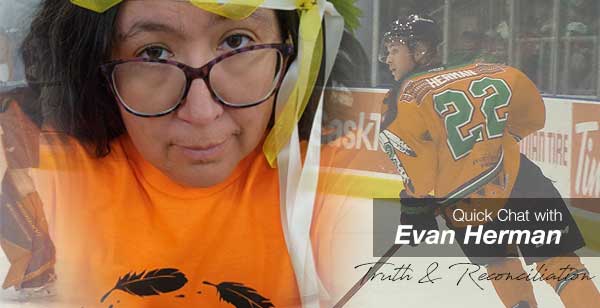 October 1, 2022 saw the game between the Edmonton Oil Kings and the Prince Albert Raiders, with the Raiders donning their special edition “Orange Shirt Day” jerseys, most of which had already been sold for charity two days before gametime.

Conversations, no matter one’s age or how awkward they might become, are the backbone to truth and reconciliation. Before the game took place, freelance journalist Marjorie Roden had the opportunity to chat with the Raiders’ Evan Herman. The honest, level-headed 20-year-old forward is one of the team’s assistant captains, and this is the ensuing conversation.

RODEN: How do you feel about the Raiders’ orange jersey design that you’ll be wearing on October 1, and why?

HERMAN: I think it’s good. It’s a whole truth and reconciliation thing. It’s a big step (forward) from the last few years here. You know, it’s good. I think a lot of the guys are excited. I know with me, I am proud to represent the Métis community doing it.

RODEN: That leads to my next question. This jersey has so many symbols on it, including the medicine wheel, the red hand (for MMIWG), the bear claws, eagle feathers, the tree, and of course the Métis sash. Which one of those symbols means the most to you and why?

HERMAN: You know what? I like them all. I mean, they all tie into each other and like I said before, it’s all about reconciliation and that’s good, and I think we’re taking the right steps forward here.

RODEN: There isn’t one there that jumps out at you? Because I know reconciliation has left the Métis out, a lot, in past years.

HERMAN: I mean, it’s just the whole concept, to think about, is good. You know what? I can’t really pick one out, but I know the jersey design is really, really neat and they did a really good job designing it.

HERMAN: It sure is, yes.

RODEN: If someone were to question the importance of the “orange shirt day” and “every child matters,” if they did it in a less than kind way, how would you react diplomatically to that?

RODEN: Do you need an example?

RODEN: I was wearing this shirt* at a craft fair about a week and a half ago, and this guy comes up and is like “Heh heh, that shirt’s funny! That’s a funny joke!” I was like “No, this is not a joke. This is about children who never came back.” He was like “Heh heh, oh well, you know, they’ll get over that, that kind of people!” I just looked at him and said “We aren’t getting over it anytime soon.” So if you had to face a similar situation - and I’m sorry to lay that on you…

HERMAN: I don’t know how to answer that one. It’s a tough one.

RODEN: I know. I had a hard time staying diplomatic myself.

HERMAN: Yeah. I really don’t know what to say (in that situation). It’s hard for me to say something because you never know.

Many thanks to the Prince Albert Raiders and especially to Evan Herman for taking the time to allow for this conversation to take place. No matter one’s age, finding a way to a peaceful co-existence in this great nation will not happen overnight. Truth be told, facing those very uneasy topics and sharing perspectives on those topics to find an empathetic understanding of those awkward subjects is the honest path to reconciliation.

And on another note, the Raiders won the game over the reigning WHL champion Edmonton Oil Kings with a handy 5-1 score, with 4 of those goals coming in the first period.

*The shirt was an orange one with the words “And they whispered ‘They found us’” in a circle of black feathers, designed by Princess Heart Designs in Prince Albert.