The Saskatchewan Rush teams up with Ashley Callingbull 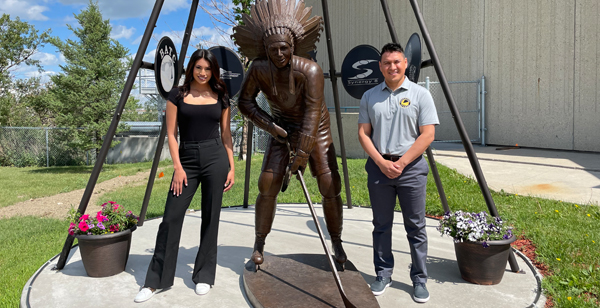 Ashley Callingbull is the new ambassador for the Saskatoon Blades and Saskatchewan Rush teams. Callingbull stands by the new Fred Sasakamoose statue in Saskatoon.<Br> Photo supplied

“What Ashley has accomplished In her young life is nothing short of remarkable," said team president, Colin Priestner in a news release. "She is an inspiration to millions of young girls around the world and having the chance to meet her over the weekend it was clear to see why as she is so empathetic and kind that she makes such a great impression on everyone she encounters."

Callingbull, from the Enoch Cree Nation on Treaty Six territory in Alberta, is a model, actress and television personality. She became a household name after becoming the first Indigenous women to win the Mrs. Universe title in 2015.

“I work with a lot of women and children around the communities and here within Saskatoon so I am here quite often and now it will be easier for me to be more accessible to these communities.” said Callingbull in a news release.

Callingbull volunteers her time to work with community elders and aboriginal youth. “Now I’m with such a huge organization, the Blades and the Rush, I am able to have more access and give more input and also more opportunity and that is what I’m most excited about,” Callingbull said in the news release. “I’m hoping to create more programs for not only the youth but indigenous peoples around the communities of Saskatoon. I can’t wait so I will be at every game.”

Callingbull is currently working as the in-game host for the Edmonton Elks of the Canadian Football League.