The birth of Eagle Feather News and an unsuspecting publisher

To set the scene, myself and two gentlemen named Richard Manns and Glenn Saganace had a business teaching Aboriginal awareness. It was early in the business, and we had one client that booked no more than four days a month. So, we had time on our hands and were trying to fill it with business ideas. Sitting around our office one day and a fellow named Darryl Pratt comes in. Darryl has been running a monthly paper (Thundercloud News), but needs space, help selling ads and a new name because he just broke up with his business partner.

Us three, knowing nothing about newspapers and publishing, said sure! We had absolutely no clue. But Darryl did. Sell ads. Write stories. Layout. Print. Deliver.  So, I became an ad salesman. Hit the phones, making appointments. Sold a full-page ad to Supreme Basics! High fives all around the office. I was then told they had come up with a new name for the paper.

After much deliberation about Times this or Courier that, some one looked at Darryl’s wife’s jacket, and it had an eagle feather embroidered on the sleeve. They said, “how about Eagle Feather News?” Boom. That was it.

Now the challenge was what to print. We were university students or graduates, so we edited some papers on social issues as filler. 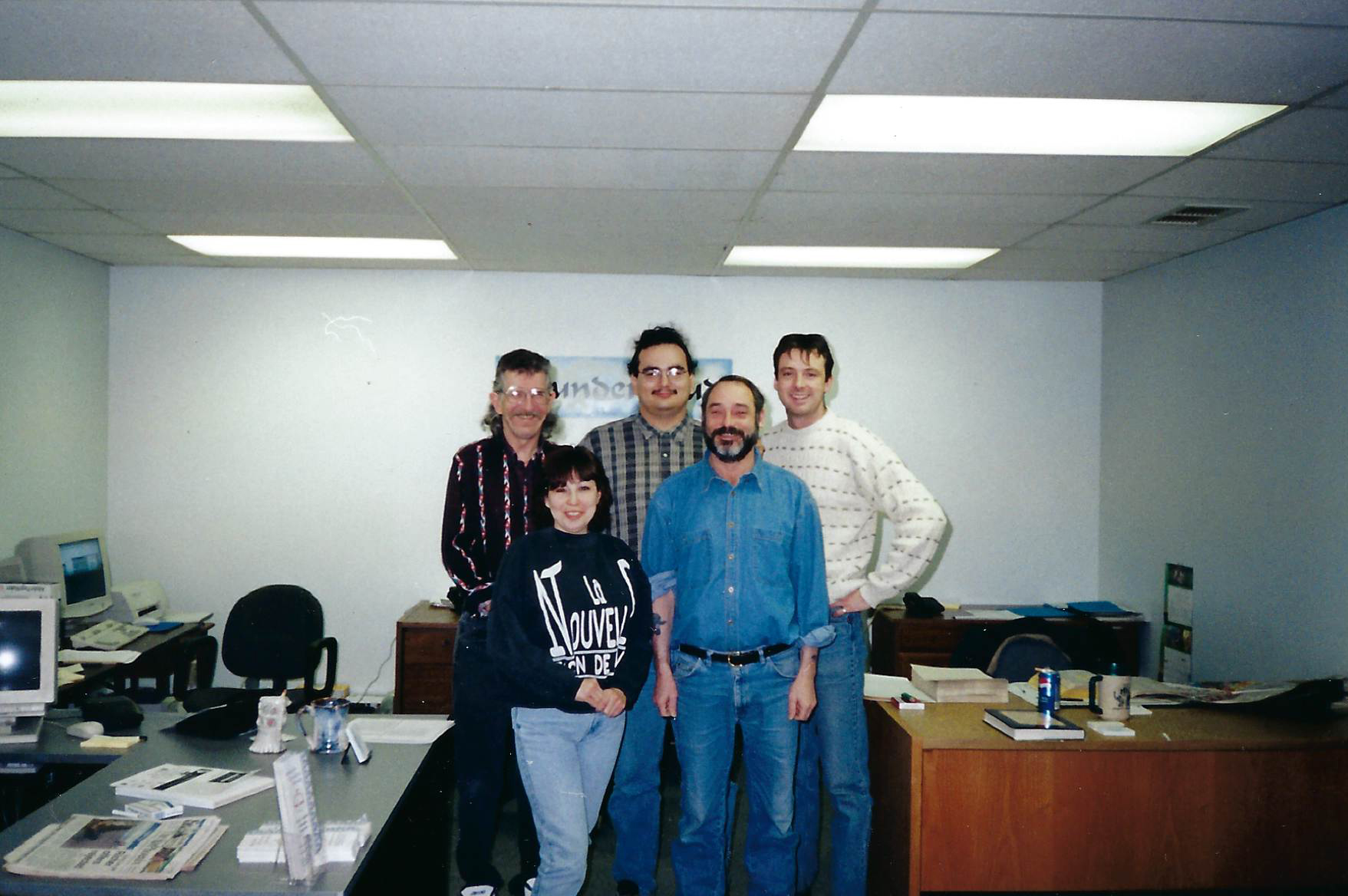 Some friends contributed. Darryl knew writers. And it just so happened the Métis Nation-Saskatchewan election of 1998 was in full campaign mode, and I set out to cover it. What a learning experience. Met the players, learned the constitution, the election act, met my soon to be employee and pal Ivan Morin. It was fascinating to witness and ask questions and then flush out how we were going to write the story.

In the meantime, Glenn was made the design person because he was the only one with any passing design talent. We gathered ads and stories, Glenn slapped it together and we felt pretty good about what we made. Come time to print though, Darryl had no money. I was fortunate to have a credit card with enough room to cover the print. So, we printed that sucker. Looked good with new MN-S President Clement Chartier on the cover.

Now repeat in month two and our representative at the printer, Dennis Dowd and their designer Karen Edwards approached us and said we had the right idea for the paper, but what if the cover looked like this. And they showed us a mock up of a beautiful eagle soaring through the blue sky. We loved it! That design, with a few tweaks over time, would come to be our masthead and logo for the next 25 years. I quit my other two jobs at UPS and as a contract social worker to focus on the business.

For Issue 2, the cover story was the election of Perry Bellegarde as Chief of the FSIN. Then the next cover was when they named Mary Ellen Turpel-Lafond a provincial court judge. News was happening and we were all over it. But behind the scenes, no money, turmoil, and stress. Darryl left the paper and we three became the owners. 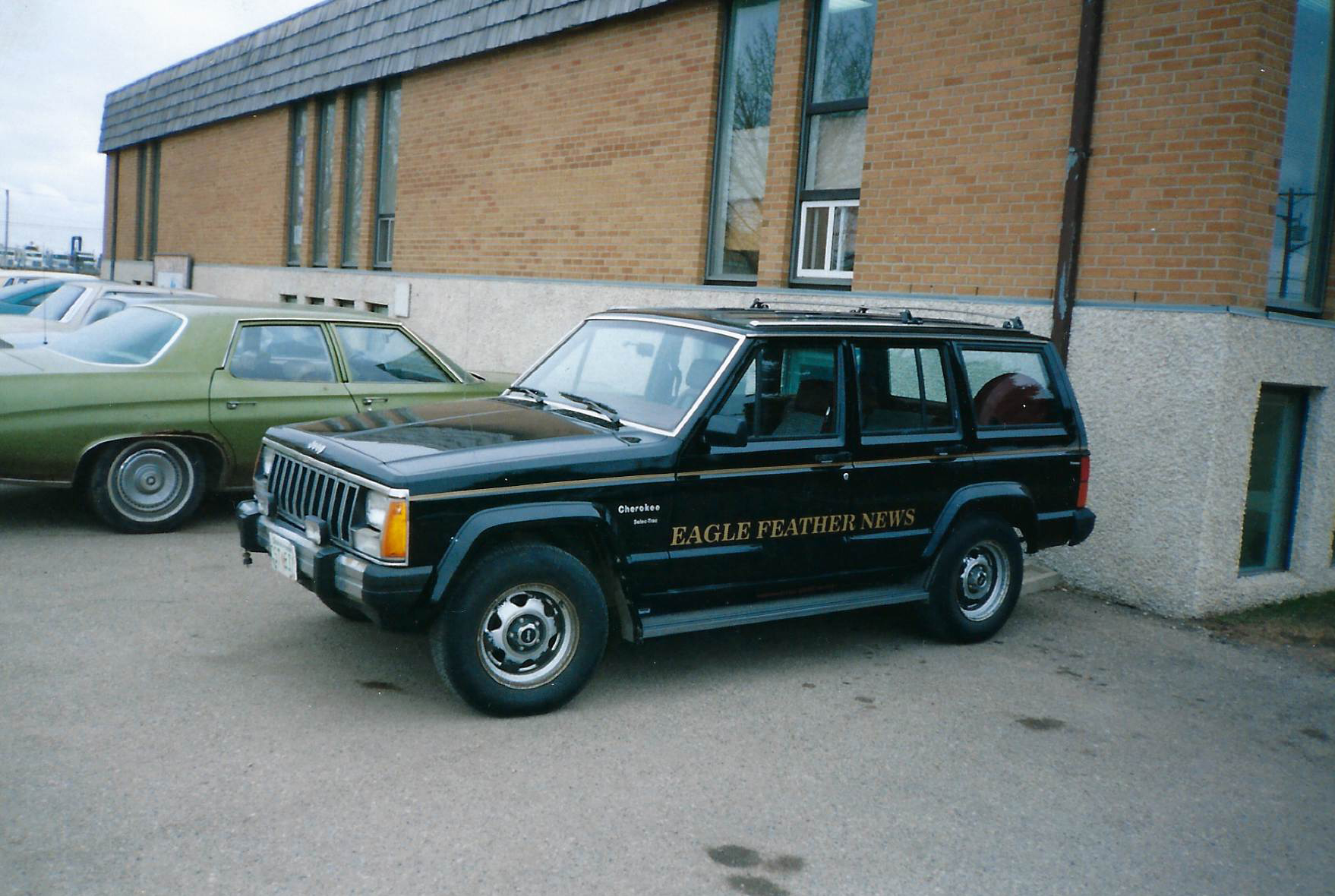 Then Glenn made the decision to leave and go back to school, leaving Richard and me. Then Richard and I could not agree on many things and in October of that year I bought out Richard. By then we had moved to an office building in Riversdale. We had four or five people on staff or coming and going, a big pile of bills and a wee tiny pile of receivables and still no idea of what I was doing, but we were certainly doing something. And in a very small nutshell, that is how I came to be the publisher and editor of Eagle Feather News.

Now to go from that pile of trouble and potential to where we are now 25 years later, we needed a lot of luck and lots of good people to work with. Here is a list of folks that contributed in one way or another over the years. For sure I am going to miss someone so apologies beforehand. 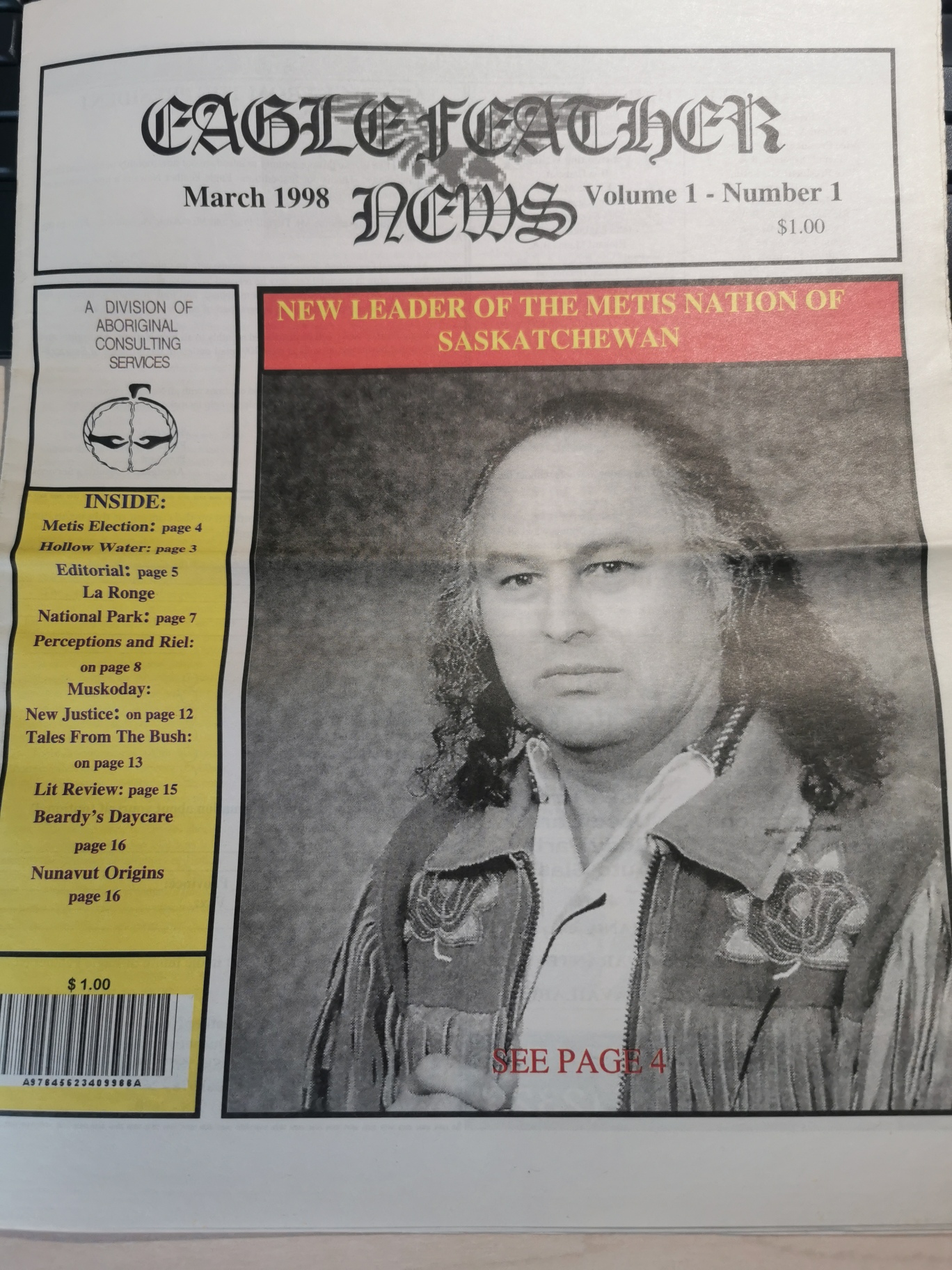 We must also thank every single one of our advertisers. When it came to writers and content, I owe deep gratitude to my old friend, the late Tyrone Tootoosis. He came casually strolling into our office one day, dripping culture and integrity, and changed our trajectory. He did a column called mekwanuk. He also introduced me to his mother-in-law, who he insisted should write for the paper. Enter the late, lovely, and talented Bernelda Wheeler, a featured columnist for years. She brought in John Cuthand and Maria Campbell and then Paul Chartrand as writers and eventually her daughter Winona Wheeler. What a score to have such accomplished people share their words in our paper. Other deadly columnists have included Richard Wagamese, the “Angry Indian” Tyson Kiasawatum, Sandra Ahenakew with “Sandy Sez” the hilarious Dawn Dumont, Alyson Bear, Mike Gosselin, who was a writer and columnist, and the weird and insightful “Dirk Dashing,” aka Winston McLean.

Our dear friend Shannon Avison, department head at Indian Communication Arts at the First Nations University of Canada has been producing Indigenous journalists for 30 years. Her boundless energy in recruiting Indigenous students and training journalists is second to none in the country. Through our partnership with Shannon and FNUniv, we have published the first articles of dozens of Indigenous writers and have seen many go onto to great careers in journalism. Our former editor, Jeanelle Mandes, came through INCA, and we published her first article. Now she is with Global Regina. And Kerry Benjoe also had her first article published in our paper. Now she’s running the joint.

The key person for shaping the words and design of Eagle Feather News over most of our journey has been my mentor and friend Warren Goulding. In the late 90s, he traded me his skills as a publisher, editor, and journalist with over 25 years experience at the time for some office space so he could write his book Just Another Indian: A Serial Killer and Canadas Indifference, published in 2001. That working relationship lasted over 20 years. For many years, it was just Warren and I having long phone calls and marathon weekends as we pulled together issue after issue. The internet allowed us to work provinces apart, but those phone calls, idle chit chat, analysis of the news, and the damn paper business will always be a fond memory. 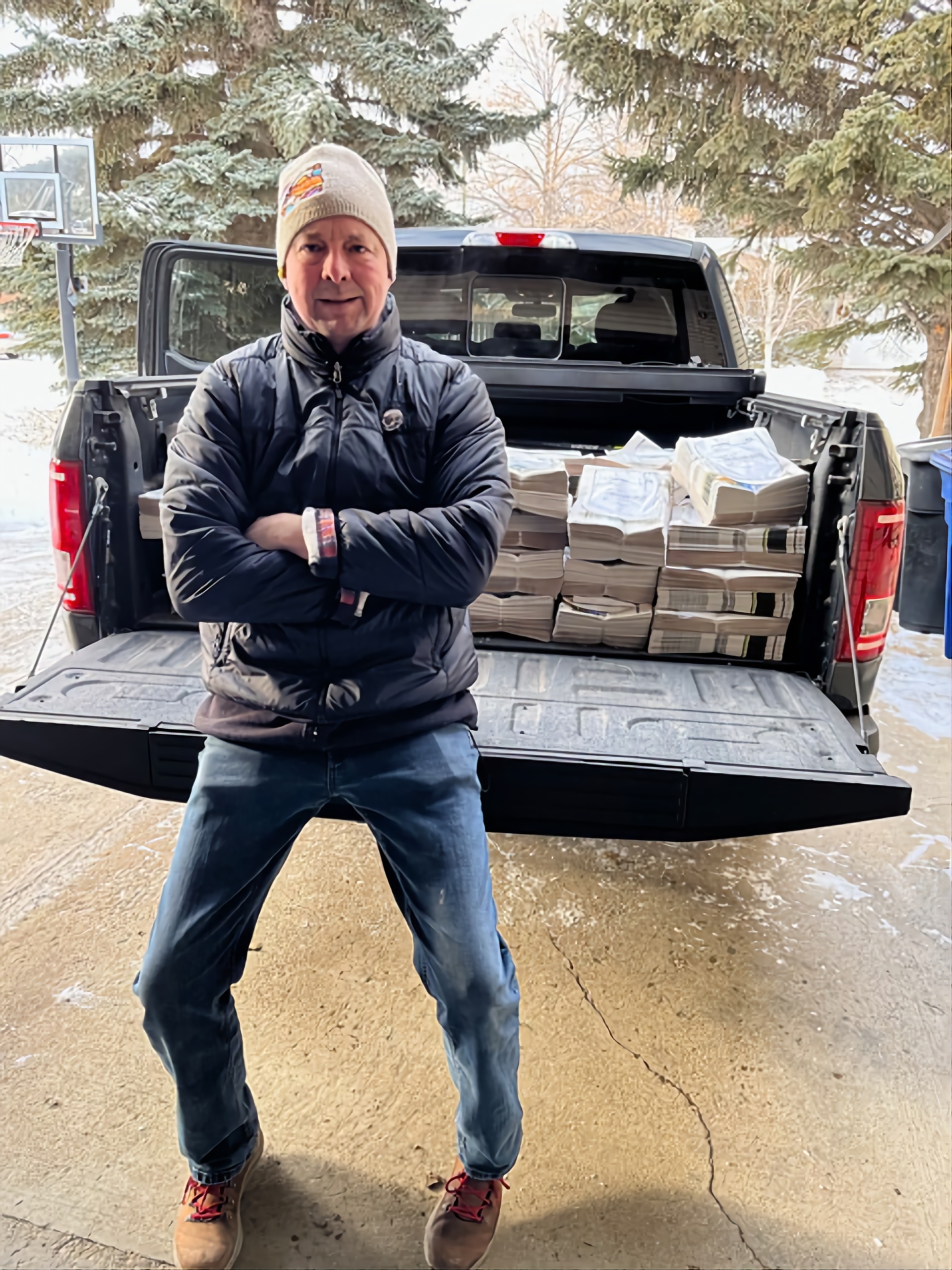 
The last years have been fun to work with Deirdra, the legendary journalist Betty Ann Adam and Errol Sutherland. But the writing was on the wall and the energy was waning. Once the decision was made to leave, the right people emerged.

In 25 years in the media, I have witnessed so much history, much of it being made by average ordinary people. We told stories, good and bad. When it was bad, we tried to be fair. We mostly stuck to the good because that’s what the community wants and deserves. The best thing about this whole experience though has been the people. The advertisers that supported us. The friends we worked with. The community we connected with and the people whose stories we told.

And you, the reader. I want to thank you all for allowing me to take this ride with you over the past 25 years. Now we couldn’t be happier to see Ben, Melody, Errol, and Kerry take over, and with a team like that, I look forward to reading this paper for the next 25 years.