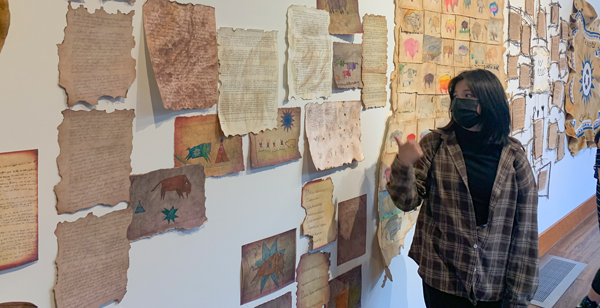 Wanuskewin, students from Chief Whitecap School and Wâhkôhtowin School were invited to celebrate the “Reclaiming Heritage” project, where their art was displayed. Photos by Honey Constant

Proudly displayed in the gallery of Wanuskewin Heritage Park is artwork and writing from about 75 young students who took part in an Indigenous history and culture program.

“You can feel the pride when they see the work they have (displayed) here,” said Trevor Iron, Grade 7-8 teacher at Wâhkôhtowin School in Saskatoon, and member of Canoe Lake Cree First Nation.

“Seeing it here, on the main stage, is a huge accomplishment for them. I let them know that this is just a first step for them,” said Iron.

The students’ work is the product of the Saskatoon Public Schools (SPSD) and Wanuskewin “Pre-Contact Literacy and Art Project,” which is aimed to dispel stereotypes and reclaim Northern Plains Indigenous heritage by providing the students with a hands-on opportunity to learn about the period of Indigenous history before European contact was made.

“Our mission was always to get down to the root of who are the Indigenous people and what their story is, which is in line with Reconciliation,” said Honey Constant, Heritage Educator working SPSD and Wanuskewin on the project. 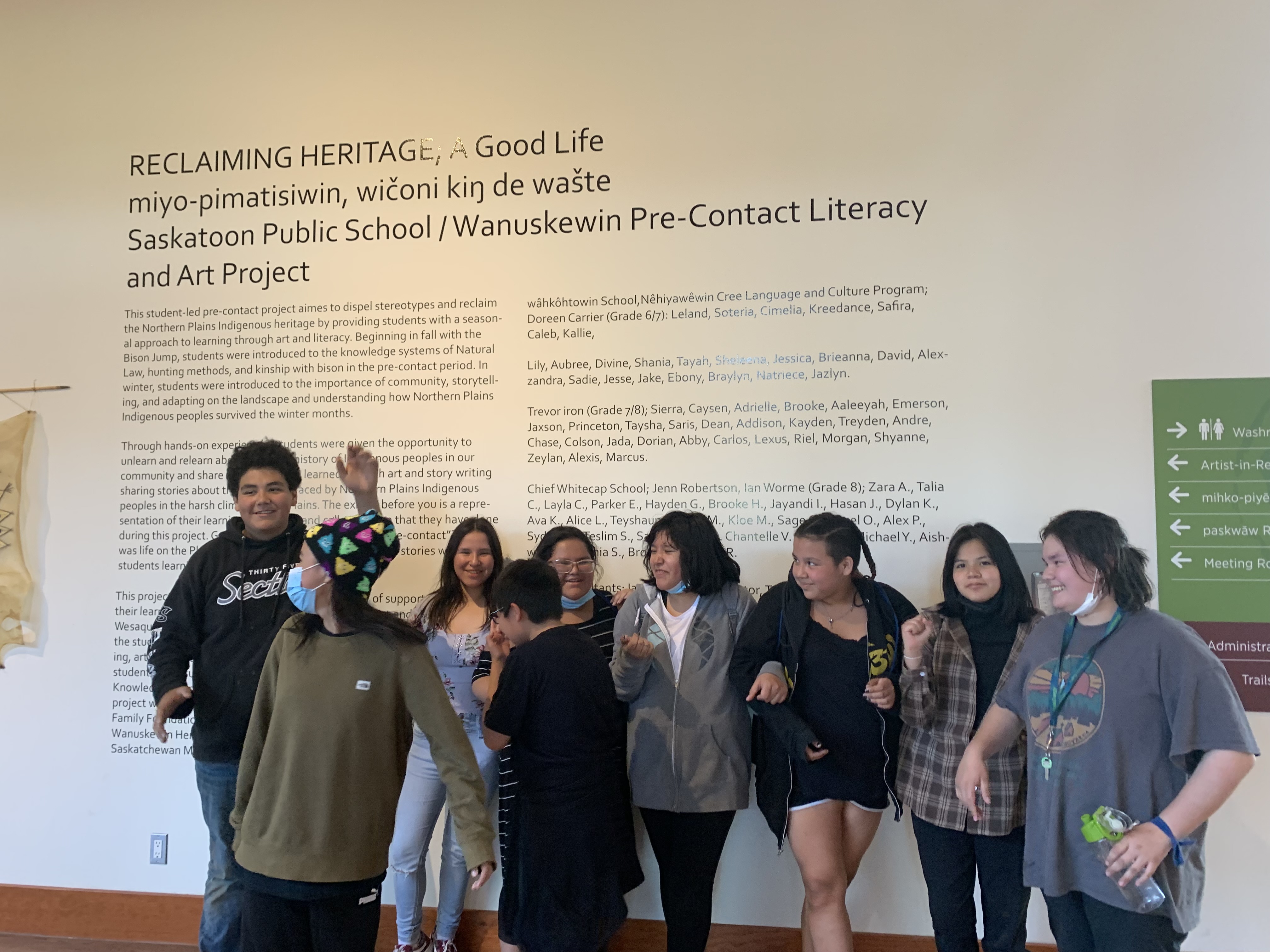 “The more we talk about the history, the stories that were passed down, how they lived on this land — giving the students these first-hand experiences only builds a better understanding and appreciation for each other as human beings,” she said.

The project was funded by The Brownlee Family Foundation, as well as contributions from SK Arts and Saskatchewan Music Educators Association. Three classes participated in the project — the Grade 7 glass from Chief Whitecap School and the Grade 7/8 and 8 classes from Wâhkôhtowin School.

Following lessons grouped by season, students were invited to share what they had learned through writing stories and creating art about the conditions Plains Indigenous people faced.

The resulting art and writing is titled, “Reclaiming Heritage,” which includes poems, short stories, paintings, wood burnings, animal hide paintings, and songs. The works will be displayed at Wanuskewin until June 24, and then moved to the SPSD building in downtown Saskatoon.

“I think it has meant a lot to all the students, even the non-Indigenous ones,” said Constant. “ I think they learned to feel comfortable with the content, in putting themselves in a position to create something that they don’t necessarily know first hand. I hope that they have a sense of connection to the history too.” 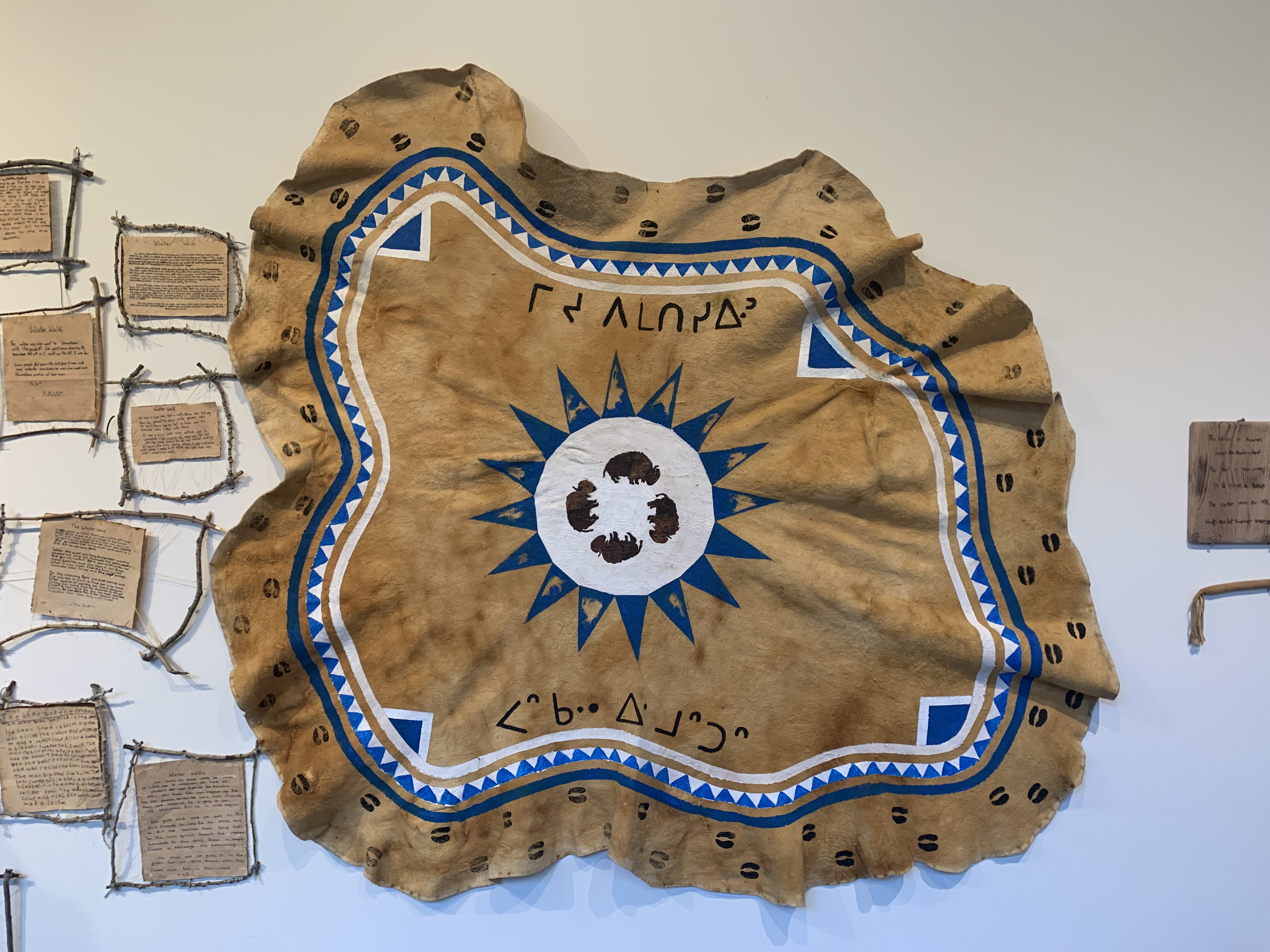 Connecting directly with the land, and even wildlife, was something particularly memorable for his students, said Iron.

As many of the lessons and experiences took place at Wanuskewin, Iron recalled one afternoon when his students hoped to see the bison. After being out in the field for a short time without seeing any, Iron instructed his students to make a call to the bison and to their amazement, the herd came running toward the group.

“The kids were asking, ‘Why are they coming, running to us?’ I said, ‘because you asked them,’” said Iron. “That moment really opened their eyes to the connection we have to everything living in our world.”