Speaking and living the Cree life 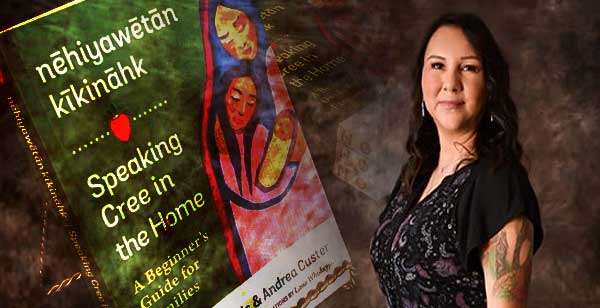 Andrea Custer has successfully incorporated the Cree language into every aspect of her life including and her children’s lives. It is a fete she is very proud of because she is determined to help revitalize the language in the province. Photo supplied by Shannon Avison

Once Andrea Custer stepped into the world of Cree there was no turning back.

Originally from Pelican Narrows, her family lived a land-based lifestyle and once the ice melted they lived in traditional camps.

Unfortunately, she lost the connection to the language after attending Indian Residential School. Custer first attended when she was nine but only briefly. Her late grandfather visited her at the school and saw that she was unhappy, so he took her home.

Custer was 15, returned to residential school and once she was finished school, she didn’t return home. This is when her connection to the Cree language was interrupted.

However, Custer found her way back into the Cree world.

Her journey began about seven years ago when she met Belinda Daniels.

In 2014, Custer applied to intern for Canadian Indigenous Languages and Literacy Development Institute (CILLD) based out of the University of Alberta working under Daniels.

After the internship Custer attended a renaming ceremony for Maskwacis First Nation in Alberta. It was a powerful experience, that changed her trajectory in life.

She realized language is a part of decolonization. 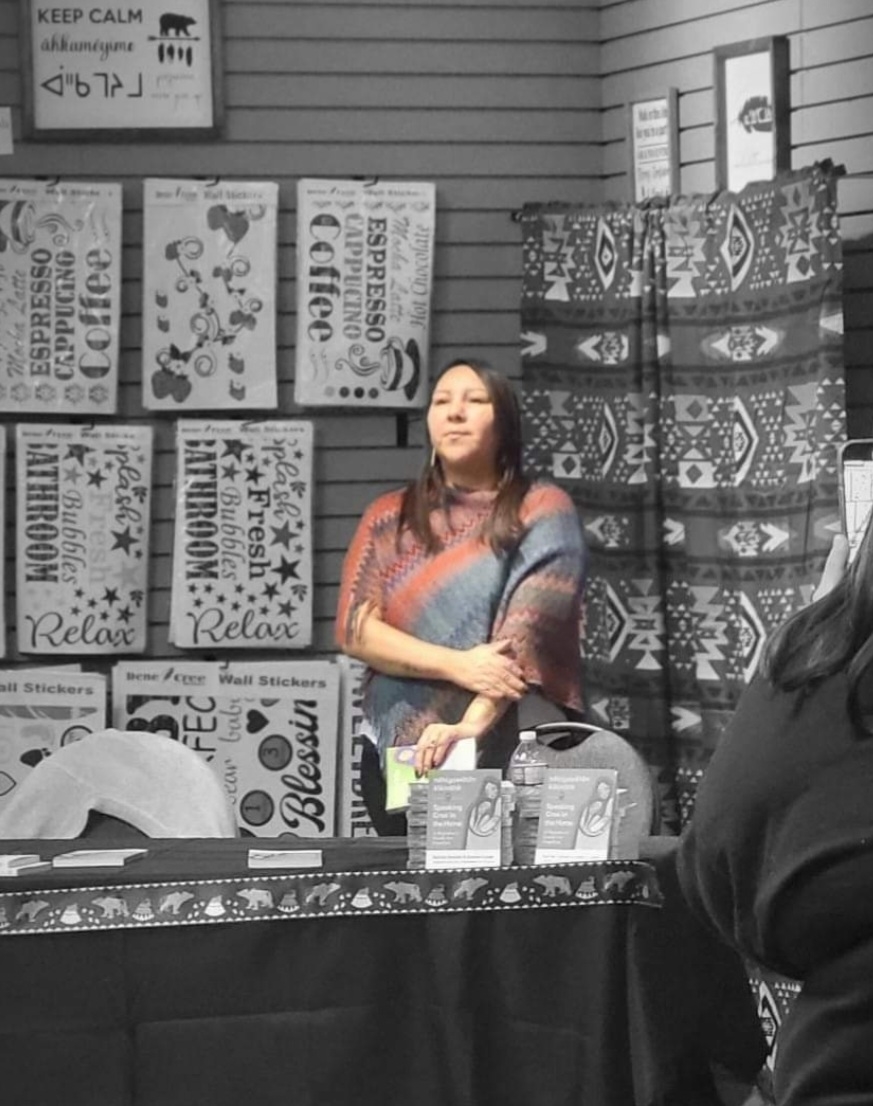 Andrea Custer at a her book launch in Saskatoon. Photo supplied by Shannon Avison

Custer moved back to Saskatchewan and became a Cree teacher, which was the beginning of her work to revitalize the Cree language.

“Responsibility lies with us in our homes because we are our children’s first teachers” says Custer.

Most recently, she and Daniels collaborated on a book called nehiyawetan kikinahk: Speaking Cree in the Home to help others implement Cree in their households.

It launched on Nov. 3 at the First Nations University of Canada in Regina and in Saskatoon at Indigenous 1st Designs.

The book is basically a beginner’s manual to Cree.

In addition to the book the pair has a four-episode podcast on Pikiskwewin.ca “Cree and Coffee with the Crazy Crees.”

The first episode the pair talks about the origin of the name Cree and Coffee, followed by talks with guest speakers Keith Goulet, Leda Corrigal, and Solomon Ratt.

Each day, Custer chooses to bring the Cree language into her life, which has changed how she parents.

She introduced her youngest son to the language while he still in the womb. Custer held recorders up to her stomach for him to listen to Cree, she sang and spoke to her unborn child in Cree, so he adapted it before even being born.

Custer hired a fluent Cree speaker to care for her son when she returned to work. This work continues now that he’s in daycare.

Knowing her son is surrounded by only Cree “is medicine to her heart.” However, it is challenging because she must remind people, he’s a fluent speaker and speaking English to him disrupts his learning. 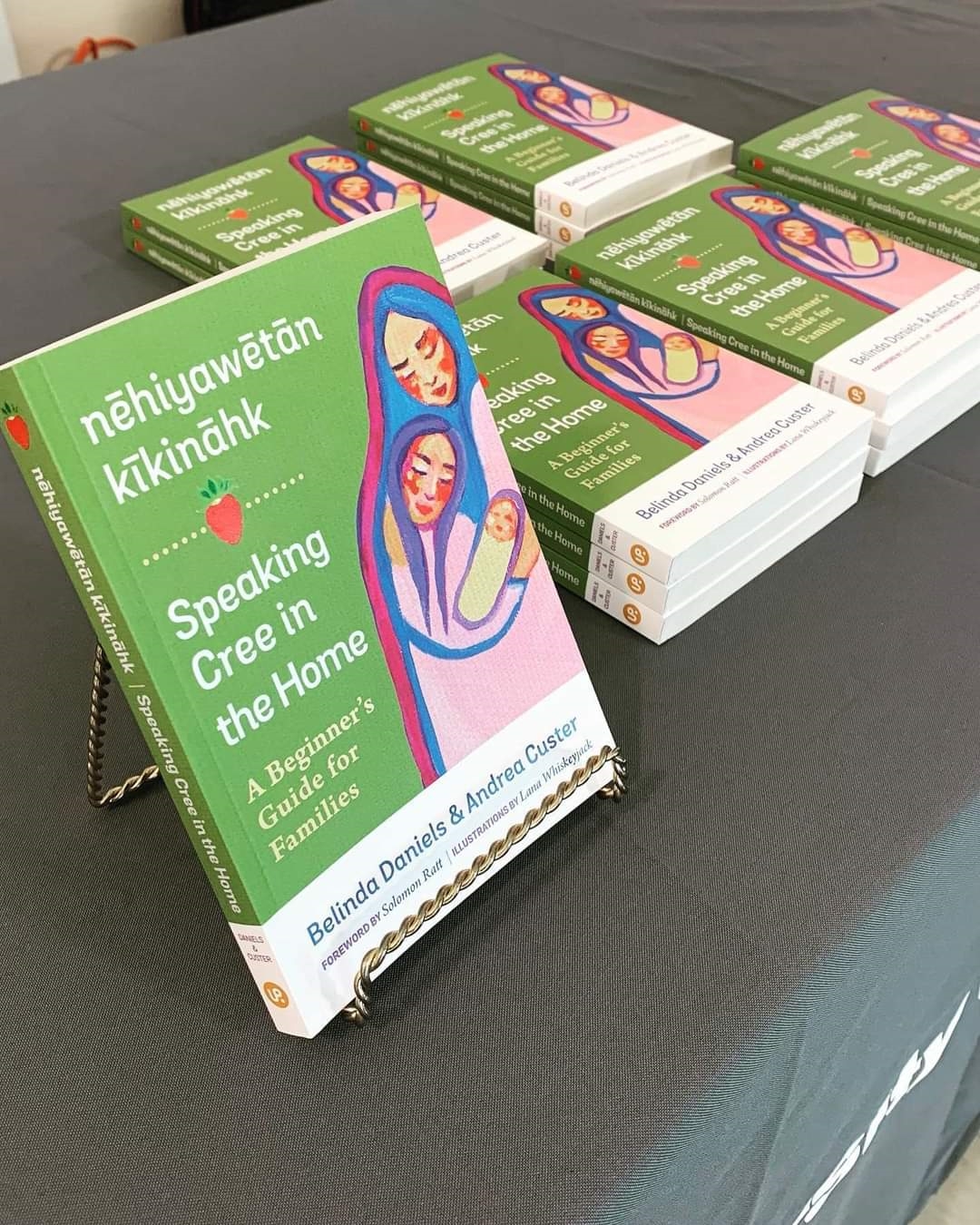 Custer has begun teaching her older children Cree too.

“You need to spend a lot of time in language, find people as passionate as you are [if you are serious about learning the language],” said Custer. “Make those connections and reach out.”

She is doing what she can to make Cree more accessible to everyone.

Custer has a YouTube channel called “Learn Cree with Andrea” where she uploads videos regularly sharing how she implements Cree within her home.

In her debut video she says, “our children deserve to learn the language, inherit the language, it’s their birthright and it’s our responsibility to pass that onto them just as it was passed down to us.”

The book nehiyawetan kikinahk: Speaking Cree in the Home is available at the UR Press and at Indigenous 1st designs located in Prince Albert and Saskatoon.