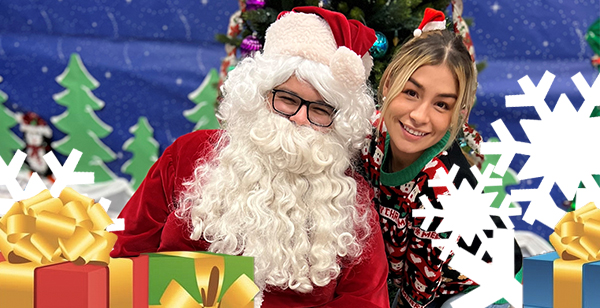 No more Rudolph the red-nosed reindeer.

Instead, Santa and his elves board a dimly-lit Beechcraft 1900D at 6:30 a.m. one cold winter morning.

The plane carried a cargo full of gifts bound for the Saskatchewan’s Athabasca Basin region.

At the helm was Capt. Brady “Goose” Tetzlaff and his first officer Christian “Maverick” Scibetta.

“On Goose! On Maverick!” Santa shouted as the pilots took the plane to a cruising altitude of 28,000 feet.

(It’s a one-and-a-half-hour flight to the students and teachers waiting in anticipation for Santa’s arrival.)

Christina Clarke is one of those teachers in Stony Rapids.

She looked up to the sky patiently waiting with her students in tow for the orange plane to circle overhead signaling Santa’s arrival.

It’s become somewhat of a tradition. 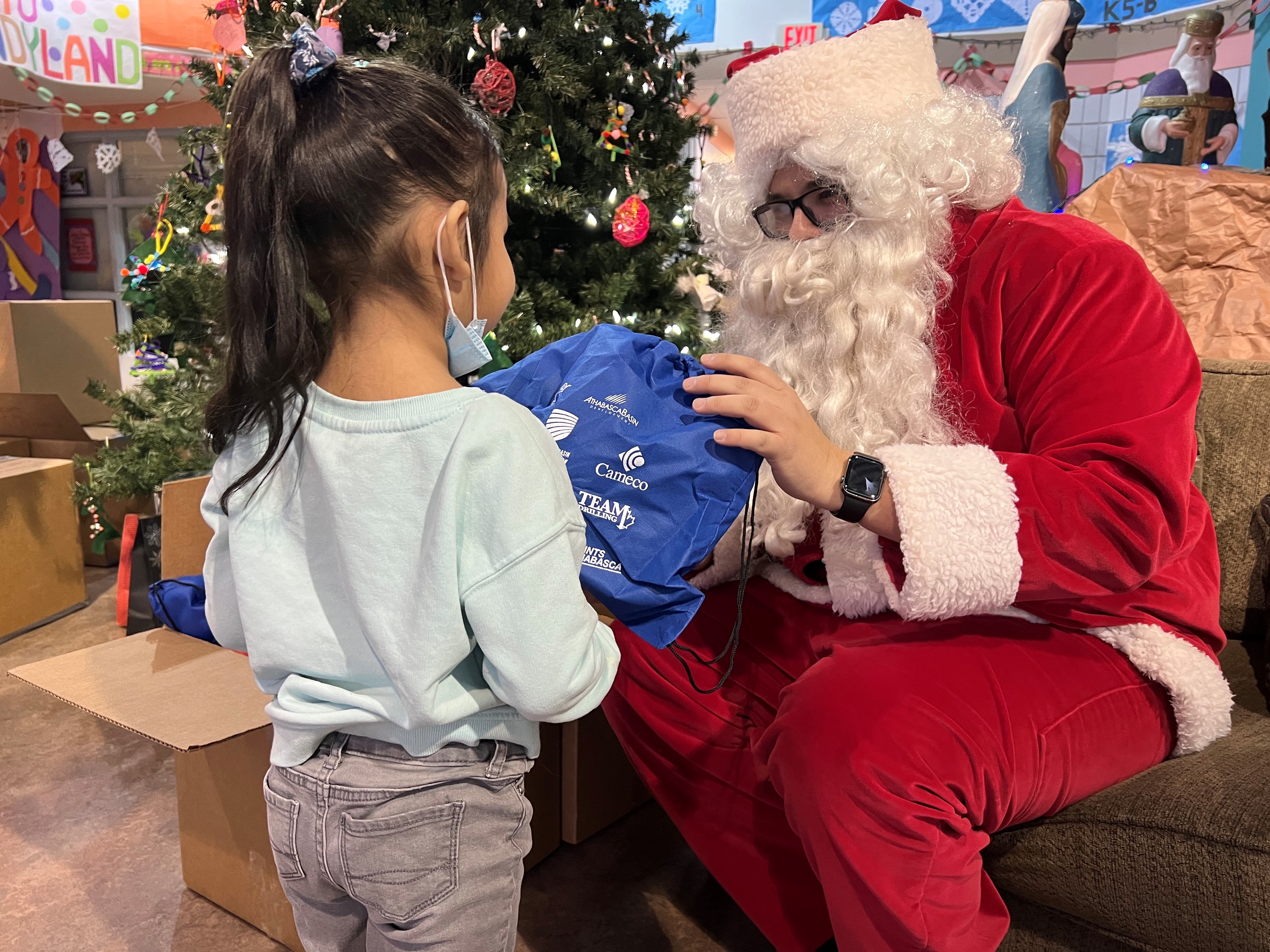 Santa gives a little girl one the gift bags he brought with him as partof Rise Air’s 22nd annual Santa in the North trip. He handed out 1,3000 gift bags filled with goodies including a book by an Indigenous author. Photo supplied by Ben Borne

She’s been there when Santa has arrived for the last 22 years.

“Just because we’re isolated, it doesn’t mean that Santa is only down south – the spirit of Christmas is everywhere,” Clarke said. “The kids are excited, families are excited, and it’s great to see Santa again!”

For Georgia St. Pierre, acting principal at Father Megret High School in Wollaston, Santa’s visit to the north is meaningful for the children.

“Christmas is a time of giving and hope, and these kids, it doesn’t matter what they get … as long as they get to see Santa.” St. Pierre says.

The children were not disappointed.

Packed inside Santa’s gift sack was more than 1,300 gifts for the students in Wollaston, Stony Rapids, Black Lake, and Fond du Lac.

There was a palpable energy in the room as the kids tore into their gifts with shrieks of excitement. 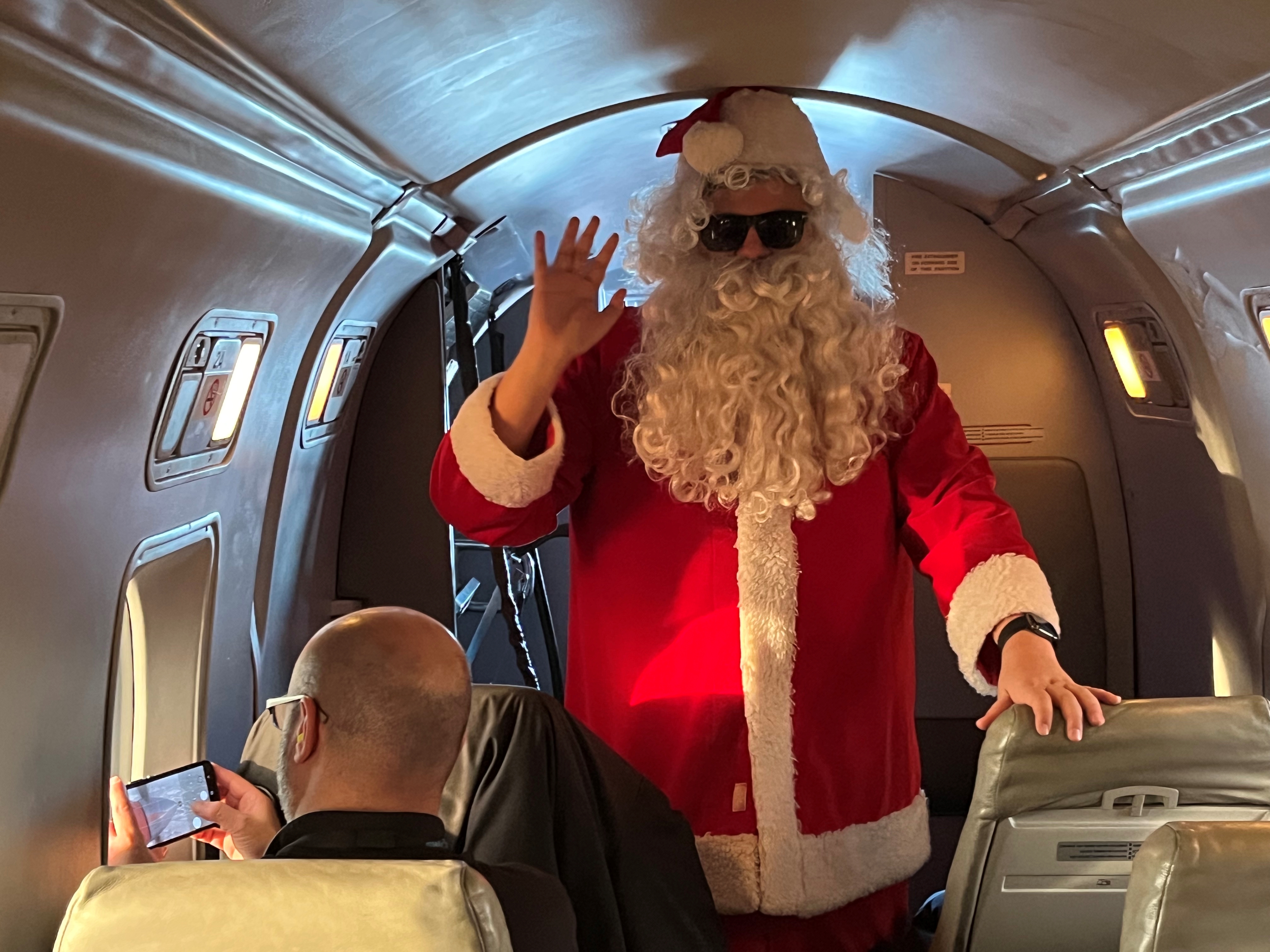 Santa gives a wave as he boards the plane that will take him to the province’s far north. Santa visits communities in the Athabasca Basin as part of Rise Air’s 22nd annual Santa in the North trip. Photo supplied by Ben Borne

Eagle Feather News was on hand to ask Santa a little more about his gift choices.

With changes in technology and supply chain constraints – Santa is often busy negotiating deals with toy manufacturers to ensure a steady stream for his workshop. This keeps the old man in red busy, so he needs support for this special trip from Saskatchewan-based businesses.

“Helping bring the magic of Christmas to the kids in the most northern parts of our province for 22 years is the reason for the season for the Rise Air team,” says Dan Gold, Director of Communications and Stakeholder Relations at Rise Air. “We wouldn’t be able to do this without our financial partners at Athabasca Basin Development, Cameco, Orano, NLCDC, SSR Mining, the team at Santa’s Workshop and other in-kind sponsors.”

After two full days in the north, including an overnight stay at Al’s Place in Stony Rapids, Santa jumped back on the plane to head back to his sleigh in Saskatoon. While looking out of the plane window as it circled around the community before finally taking off, he said with a twinkle in his eye, “Merry Christmas to all, and to all a good night.”