Removal of headstones at Cowessess being “treated like a crime scene,” Chief says

Cowessess First Nation has announced the discovery of an estimated 751 unmarked graves at the former Marieval Indian Residential School. 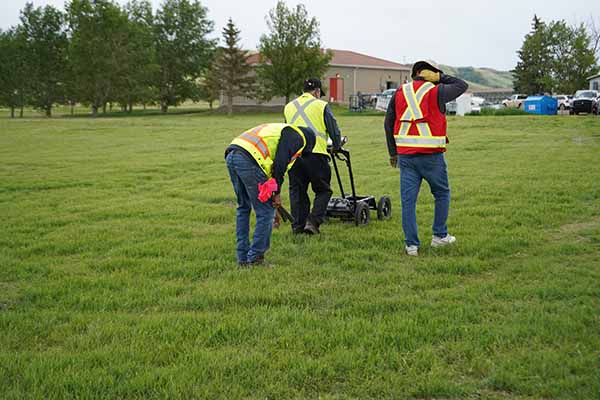 Chief Cadmus Delorme, during a press conference Thursday morning, said the First Nation started radar penetrating research on June 2, 2021. He emphasized the findings are not a mass grave site, but one-metre by one-metre unmarked graves. He said the radar has a 10 to 15 percent rate of error.

The announcement comes less than a month after remains of 215 children were found at the former residential school in Kamloops.

The Marieval Indian Residential School, operated by the Roman Catholic Church, began in 1898 and closed its doors in 1996.

“We always knew that there were graves here,” said Delorme.

“The Roman Catholic Church residential school has impacted us intensely, and today, we have generations who may have not gone through residential school but are feeling the first and second generation impact… We all must put down our ignorance and accidental racism of not addressing the truth that this country has with Indigenous people. We are not asking for pity. We are asking for understanding,” he said.

Delorme said the headstones from these graves were removed by Catholic Church representatives in 1960. They cannot confirm that all 751 were children attending Marieval, as oral stories indicate adults from the community and church may have been buried here as well, he said.

“We didn't remove these headstones. Removing headstones is a crime in this country, and we are treating this like a crime scene at the moment,” said Delorme.

According to Delorme, the findings are part of a phase 1 search for unmarked graves, which covered a 44,000 square metre Roman Catholic grave site. Continued searches will happen in years to come, he said, in locations based on oral testimony.

Prime Minister Justin Trudeau, and Ministers Carolyn Bennett and Marc Miller have reached out to Cowessess in solidarity, as has the Roman Catholic Archdiocese in the region, said Delorme. But Cowessess believes it is time for the Vatican to respond to these tragedies.

“The Pope needs to apologize for what has happened to the Marieval Residential School, the impact on Cowessess First Nation, the survivors, and descendents. An apology is one state of many in the healing journey,” said Delorme.

In the coming weeks, Cowessess will work to identify and put a name to each of the unmarked graves, which Delmore said will continue to open up wounds for the community and survivors of residential school.

“This was a crime against humanity. An assault on First Nations people. We are proud people, the only crime we committed as children was being born Indigenous,” said Federation of Sovereign Indigenous Nations (FSIN) Chief Bobby Cameron during the announcement.

Cameron said they will continue to find more grave sites as First Nations throughout Saskatchewan. “We are seeing the results of the genocide that Canada committed. Genocide on our Treaty land. We will find more bodies, and we will not stop until we find all of our children,” he said.

All former residential schools in the province, as well as sanatoriums and Indian hospitals will be searched, said Cameron.
The FSIN is calling for a full, independent public inquiry into the genocide, said Cameron.

The Indian Residential Schools Crisis Line is available 24-hours a day for anyone experiencing pain or distress as a result of his or her Residential school experience. Phone toll free: 1-866-925-4419