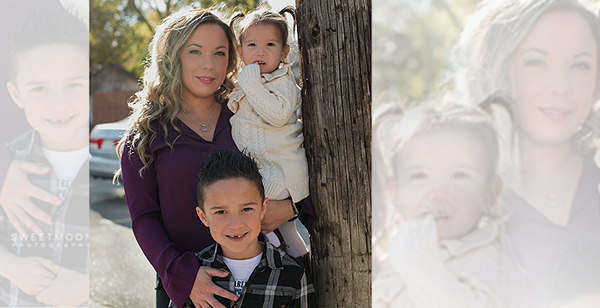 Despite the naysayers, Larissa Burnouf juggled law school, full-time work and parenting her children Bentley and Tatum, and is now one month away from graduating law school. Photo by Sweetmoon Photography

At 12 years old, I told my dad I was going to be a lawyer one day. More than 20 years later, I’ll be able to finally tell him his little girl finished law school.  A dream that I wanted to give up on more times than I can count. There has been blood, sweat, and tears. A LOT of tears. Aside from childbirth – twice, law school has been the hardest thing that I have ever done but as cliché as it sounds, if I can do it, anyone can.

My life detoured through a 15-year career in radio and television broadcasting before I decided to go back to school. I was told several times, by several people, that I was too old to go back. I was told that law school would be too hard for a mother of two young children. I was told that I would be ‘lucky’ if I made it passed the LSAT or my first year, especially working full-time.

I recall one of my closest friends telling me that law school was a terrible idea and that she was now truly concerned for my children. I even received a letter from a former program advisor stating that I would not be successful in law school because I “severely lacked civility and did not have the necessary skills needed” to succeed in law.

I cried for days after reading that letter and for weeks when I lost that ‘friend’.  I quickly realized that not everyone will support you or your dreams, but you can’t pay your bills with the opinions of others and you will never succeed if you believe them.

First, I went back to university in my 30’s and finished my bachelor’s degree. I wrote the LSAT while breastfeeding my infant and I’ve even had to attend classes with my children in tow. I made sacrifices that I never wanted to make and lost countless hours of sleep, reading and studying until sunrise. I have worked hard to get to this last month of law school, but I have made it this far because I am truly blessed to have the support system that I do. I had to surround myself with family who believed in me and true friends who cheered me on, never once doubting my abilities, even when I doubted them myself.

With the right support, mindset and unrelenting determination, it can be done. There are many services, programs, and scholarships available for First Nations people, women, single mothers and even people with learning disabilities.

For every person who doubts you, there are dozens more people who are willing to help and work with you to make sure your dreams become a reality. I am thankful for those people, and my family and friends who stuck by me through law school. I am thankful for the Canoe Lake Cree First Nation Chief and Council, FSIN Chief Bobby Cameron and the entire FSIN Executive and management for their support and belief in me. I am thankful to the Amiskusees Semaganis Worme Family Foundation, Indspire, Usask Awards and the College of Law for helping to relieve some of the financial burdens that come with pursing an advanced degree.

If I can do it, so can you.  Surround yourself with positive people and never give up on your dreams.