Métis artist on display in Rome 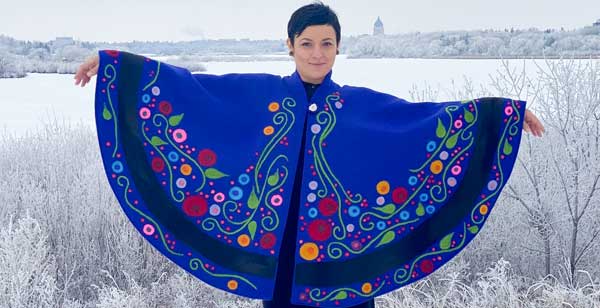 Brandy Royale models the Solstice Star Bird cape in Wascana Park. The piece was created for Louise Simard the former CAO for Métis Nation-Saskatchewan by Melanie Monique Rose. She said it was emotional to see Simard, who was part of the Métis delegation, wear the cape while in Rome. Photo Supplied

Melanie Monique Rose was moved to tears when she saw one of her creations on television during the Métis delegations meeting with the head of the Roman Catholic Church.

“It’s like seeing your baby out in the world, so proud,” she said. Rose, a visual artist from Regina, is of Métis and Ukrainian ancestry.

“As a child, my mom was really into me being immersed in my Ukrainian culture, so when I used to go to my grandma’s house everyone spoke Ukrainian,” said Rose. “That’s really changed, now nobody does that anymore.”

Not only did her artwork appear in Rome, it was also on display at the annual members show for the Sâkêwêwak Artists’ Collective Inc., which ran in February through to March in Regina.

Rose focuses on the similarities of her two cultures to inspire her.

“I call my artwork the flower people and I like to say it’s a story about me, my family, my people and our connection and relationship to the land ourselves and each other,” she said.

When Rose was commissioned to create a one-of-a-kind piece by the Métis Nation – Saskatchewan for Louise Simard, the government’s former chief administrative officer (CAO), Rose knew it needed to be special. She created a brilliant blue cape and adorned it with flowers and leaves.

“I am honored that (she) chose to wear it (to the Vatican),” said Rose. “I always hope to put healing medicine and hope into my work.”

Like many, she feels the delegation to Rome and the subsequent apology is a good start.

Rose’s interest in expressing both her Métis and Ukrainian heritage began long before she made Simard’s cape. The skills she has acquired have come from long hours of research, study and practice.

Rose attended Kootenay School of the Arts with a major in fibre arts in Nelson, B.C.

She expresses her identity through her art by combining old techniques and traditional designs to create something new.

“My works are full of flowers,” she said. “I use coloured wool that’s been dyed and then I use a process called needle felting. I make these floral designs onto blankets that I have collected.” Since Rose uses florals in her artwork, she couldn’t help but make the connection between Ukrainian scarves and the kokum scarves worn by First Nations people.

“I’ve always been attracted to these scarves and babushkas,” she said. “I always thought it was so interesting how both groups really claim that for themselves.”

Rose says the use of the scarves by both cultures demonstrates the friendship between the First Nations here in Western Canada and the Ukrainian Settlers.

“I think it’s beautiful,” she said. “I love it. I think, ‘Yeah! Showing our solidarity for each other and our friendship and just thinking about that original connection of where I started, you know, the two worlds coming together.”

Rose learned about the babushkas and the relationship between Ukrainian settlers and First Nations by doing her own research. “There’s a really great book called kokum babushka,” she said. “(According to the book) the Cree word, pootishka means ‘she is wearing’ it is pronounced babushka or pootishka.”

Rose grew up hearing the Ukrainian language and says she heard the references of headscarves being called babushkas.

“The Ukrainian word for headscarf is fustka or khusta.” she said adding, Ukrainians living in Western Canada say babushka.

Those interested in seeing Rose’s artwork still have an opportunity.

The Organization of Saskatchewan Arts Council (OSAC) has a touring exhibit called, The Flower People. It is at the Indian Head Theatre and Community Arts Inc. until Apr 23, 2022.