Chilling and blatantly racist comments have surfaced on social media in the wake of the death of Colten Boushie on a farm near Biggar, Saskatchewan earlier this month.

“In my mind his only mistake was leaving witnesses,” is one troubling post that appeared online. 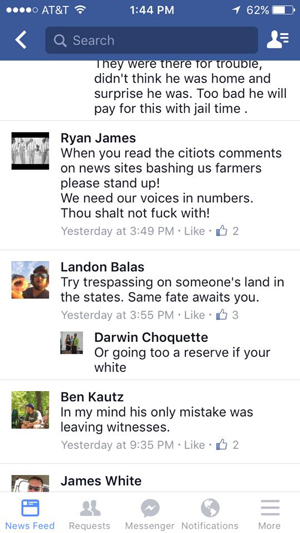 The West-Central farm belonged to Gerald Stanley, a 54-year-old farmer who is in custody after being charged with second-degree murder in the Aug. 9 shooting.

Witnesses who were with Boushie at the time of his death told media they had a flat tire and pulled over to a local farm yard to try to get help – not to start trouble. Boushie was sitting in the back seat when he was shot. He died on scene.

The RCMP came under fire when they released a statement that the Federation of Sovereign Indian Nations (FSIN) claim raised racial tensions. The FSIN maintains that the way the RCMP reported Boushie’s death provided “prejudicial information” that could cause the “average reader to draw their own conclusions that the shooting was somehow justified” because of an alleged theft.

There were no charges of theft against the other four people that were in the car at the time.

This information led to posts in groups like the “Saskatchewan Farmer’s Group” that has sparked outrage across the province. The page has since been deactivated.

The person who allegedly made the comment about leaving witnesses was contacted by Eagle Feather News and asked him about his comments about the Colten Boushie case.

He said he didn’t know who Colten Boushie was and offered this additional comment: “The one that was there stealing stuff?”

Told it hasn’t been proven that anyone was stealing, the man said, “Listen. I’m trying to combine right now I don’t have time.” He then hung up the phone.

It appears the man who allegedly made the shocking comments, serves as a councilor on a rural municipality.

Eagle Feather News called the reeve of the R.M. to get a comment about the councilman’s comments. The R.M. in question has a Code of Ethics which states members of council shall: “do everything possible to maintain the integrity, confidence and dignity of the office of a rural municipal council member.”

The reeve took three of our phone calls, once saying he was on a combine and was too busy to check his email "to look at stuff like that." He then took our third call and simply stated, “We will deal with him at the next meeting and that’s as far as it’s going to go.”

“Racism has no place in Saskatchewan. In the wake of a shooting near Biggar, there have been racist and hate-filled comments on social media and other forums.

“This must stop. These comments are not only unacceptable, intolerant and a betrayal of the very values and character of Saskatchewan, they are dangerous. There are laws that protect citizens from what this kind of hate may foment. They will be enforced.” 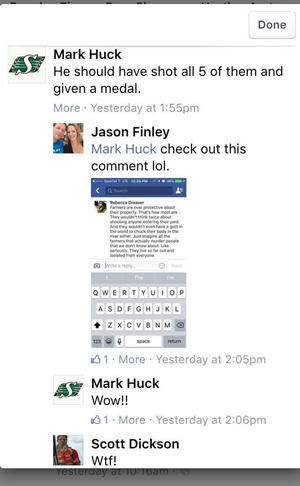 This was then followed by this statement from the National Farmers Union. “On behalf of our members, the National Farmers Union wishes to express our profound sadness over the tragic shooting of Colten Boushie and extend our deepest condolences to his family and community. We join them in mourning the loss of their loved one. As farmers, we condemn the rampant racist remarks that have circulated since the death of Colten Boushie, including comments made on the "Saskatchewan Farmers" Facebook group. We also commit ourselves to building relationships of solidarity, mutual respect, and friendship with our Indigenous neighbours and to honouring our obligations as Treaty people.”

“As soon as anyone steps into the public forum and takes on a public office whether that’s a lawyer or a municipal councilor or a person who is in the public sphere, they are certainly bound by the codes of ethics of whatever organization they’re involved with, particularly if they are sitting in a government role – even if that is a municipal government,” said Feist.

“This needs to continue, as our voices become stronger together. As a result, it also is a crucial time for non-Indigenous allies to band together and use their voices in a way that challenges and opposes racially charged attitudes and comments.”

Longman also has a message to those struggling to effectively deal with racially discriminatory comments.

“Racist opinions are best challenged with a blend of education, respect, and patience. That's the only way we can expect to move forward.”

There were rallies held in support of Boushie in front of the Regina courthouse as well as at the North Battleford courthouse and in Saskatoon.

The RCMP said they are investigating social media posts relating to this case.