GoldenEagle refuses to “be polite” in new novel 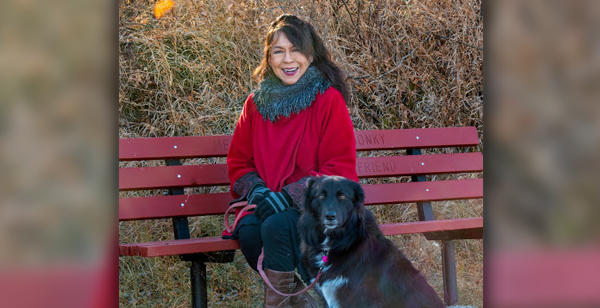 Carol Rose GoldenEagle, whose new novel The Narrows of Fear celebrates Indigenous feminism in the face of tragedy. Photo submitted

There are authors and poets who write in order to take their readers down the path of least resistance, offering easily digestible content that aims to please, rather than provoke and challenge. Carol Rose GoldenEagle is not one of those writers.

“I don't apologize for the (difficult themes) in my book. I'm not going to sugar-coat the violence that goes on,” said GoldenEagle in an interview.

“I wanted to write that because I find, a lot of the time, particularly with women, when we write we are polite. I don't think we have to be.”

GoldenEagle, a Cree and Dene author and poet, with roots at Sandy Bay and La Loche, recently released her third novel, The Narrows of Fear (Wapawikoscikanik).

In it, GoldenEagle weaves the stories of four women who learn to celebrate their culture, after some of them experience abuse at residential school and in their communities. She says the story is sometimes brutally violent, sometimes healing, and sometimes mythical, but always deeply respectful of Indigenous culture.

“It's a celebration of Indigenous feminism,” she said.

“I think we're conditioned to be polite in general. We're told from the time we're toddlers that you have to be a 'proper' lady. I don't think we have to do that anymore. I think young women can go out and conquer the world as fully as they want to.”

The novel, which GoldenEagle worked on for about two years, details physical and sexual trauma that may be difficult for readers at times, she said. The themes are based on real life conversations she's had with women, and as such, she hopes this book will be a beacon for healing.

“I hope Indigenous women will come together and realize we're united as women. And this is happening now already – but I hope the book will strengthen us, and let people know that we're capable of moving forward in terms of Indigenous rights in our communities.”

These types of stories, ultimately about compassion, hope, and change, have been fuelling GoldenEagle throughout her career. She has worked in both print and broadcast journalism at CBC, and has written two other novels and a book of poetry, Hiraeth, which was shortlisted for a Saskatchewan Book Award.

GoldenEagle was in the Sixties Scoop, never met her birth mother, and grew up knowing little of her Indigenous background and culture. The subjects in her work explore these issues, with Bareskin Dairies diving into impacts of the Sixties Scoop, and Bone Black finding justice for Missing and Murdered Indigenous Women and Girls.

“I think now is the time to reclaim our place as people, people who have ideas and suggestions, people who should be part of every process,” said GoldenEagle.

GoldenEagle's intent to tell these important stories is not slowing down. She is working on a fourth novel, “which has to do with humanity,” a collection of short stories, a children's book, and another poetry book entitled Essential Ingredients, which are love letters to her three children.

Her goal is to have twenty titles on the market by the time she's 65, she said, as well as to continue mentoring young writers to share their stories.

“You don't need permission to be awesome,” she said. “Go ahead, write, and don't be afraid to be yourself.”