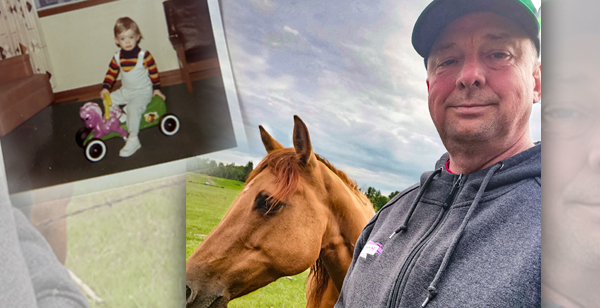 Lagimodiere enjoying all his new hobbies after retirement. Photo supplied

This is weird. I kind of forgot how to write after almost a year off. How to start. What to write about. And why am I still writing when I quit this game to specifically get away from the anxiety of writing all the time. Sometimes words and thoughts are hard.

But Kerry assured me it was just like riding a bike. Bad analogy, as I have fallen off a lot of bikes in my day. One time after a dynamic ramp jump, I went face first in the alley, with my feet kicking the back of my head. You just shouldn’t bend that way. I stood up and had my entire bottom lip full of sand and gravel. Not one mark, cut or injury on my face, just a sore knee and a bunch of Eastview alley dirt in my mouth. It was a miracle. Just like me agreeing to write this month.

I was relieved to be out of the news world this year. But I am still a news hound. Eagle Feather News is still and will always be my home page. I still get some press releases and follow some newsies and influencers on social media. Enjoying the news without the responsibility of covering it or assigning someone for it. It was a relief, especially when there were some big stories that captivated the community.

The tragedy at James Smith Cree Nation has rocked our country and forever affected our friends and relatives from that community. We must keep the victims, survivors and their families in our thoughts this season as they gather for their toughest Christmas ever.

And our old pal and former columnist Dawn Dumont had us all concerned when she and her son disappeared. Thankfully they were found safe and now we wait to see the repercussions. I was most shocked that she stopped in the northern United States instead of booking it for Mexico. When you need to hide, always go to Mexico.

Those stories were emotional and challenging to follow, but I always balanced the tough stories by following the good news stories that keep coming from Eagle Feather News. Seeing Chief Mary-Anne Day Walker-Pelletier and the legendary actor, author and activist Harry Daniels get stamps made by Canada Post in their honour was something. I had the good fortune of meeting both of those amazing people in my media career and am grateful to have. Leadership personified.

Getting out of the media has given me two things I didn’t have before. The ability to do some facilitating or events that wouldn’t have been possible as a journalist and publisher. And I have been gifted a bunch of time.

I was lucky to help facilitate part of a memorandum of understanding between several First Nations and the Northwest Territories about the implementation of the United Nations Declaration on the Rights of Indigenous People. Fascinating!

I got to dabble with the committee that was tasked to figure out the process of renaming John A. MacDonald Road in Saskatoon. A long overdue process to put that racist Orangeman and his legacy in their proper place. Also did some work with some Elders and a police service. Good, on the ground community work that I just didn’t have time for before.

The extra time has also led me to be addicted to the TV shows Rutherford Falls and Reservation Dogs. Oh, my golly the humour and characters on these shows. Thankfully Reservation Dogs has been renewed. That show is brilliant. I laugh and cry each episode.

A couple dirty TV pleasures include Reacher (kick butt former military, he never loses), and of course, Yellowstone. I can’t get enough of Rip and Beth. Admittedly, I have a crush on both.

Was lucky enough to be Speaker of the House for the last Métis Nation Saskatchewan Legislative Assembly. I got to work with my old pal and cohort Merelda Fiddler-Potter and to witness politics in progress. With the MN-S beginning a modern-day treaty renegotiation with the Government of Canada, these are heady times for the Métis of Saskatchewan, and it was rewarding to be involved.

Removing myself from the media was the right choice. My brain slowed down, I was less stressed and angry and just better. It changed how I look at a day. No more fuming and hurrying to the next thing. Enjoy the moment.

I even had a day to see my doctor about my bum knee finally. A full day to have the appointment and get an x-ray and ultrasound, usually a day I would be wound tight! But I had my phone and nothing brewing so I sat in peace and did Angry Birds to fill time. While I waited a young woman come into the office obviously struggling with a bad back issue. I finished my appointment and was waiting for an x-ray. She came for an x-ray as well and suffered in pain as she waited. The technician came to get me for my turn, and I just couldn’t do it. I said take the suffering lady before me. Maybe save her 20 minutes of misery and heck, I had nowhere to go anyways.

Once it was my turn the technician told me the lady was getting married in three days and was extremely grateful to go ahead. She cried even! Cost me twenty minutes and made her day. Made me cherish the gift of time and the ability to gift it to others. Little things.

And if you are curious about the results of the x-ray and ultrasound, it turns out the old Indigiknees aren’t going to get any better and, even though I have the time, I’m not allowed to jump my bike off of ramps anymore.