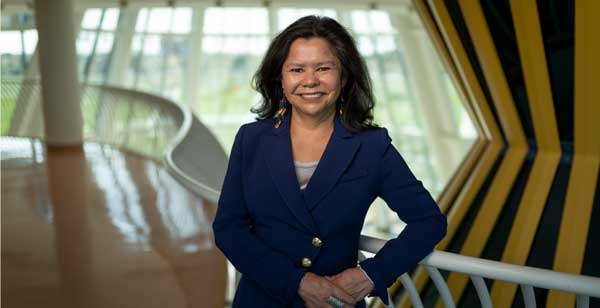 Although Jackie Ottmann just started as the president of FNUniv a few months ago, there are many things she hopes to achieve during her tenure. Photo supplied by D. Venne

For some people, education and helping others is something they feel called to do. Jackie Ottmann, Misiaykimigookpaypomoytung, is no exception.

Ottmann began her career as a primary and secondary school teacher before moving on to teach post-secondary.

“I have always been in the field of education,” said Ottmann. “I would say that I have been called to support Indigenous students, and all students in general, and to challenge systems and structures that create barriers to the success of Indigenous peoples.”

Ottmann first got involved with the First Nations University of Canada (FNUniv) in 2006 to help develop an intercultural leadership program.

“Since that was my field of research, publication and because it was the First Nations University of Canada, I was immediately intrigued,” said Ottmann.

After helping to create the program, she was then asked to teach it.

She didn’t know it then, but a twist of fate would have her back a few years later - this time as the first female president of FNUniv.

Ottman heard about the job opening just over two years ago when the former president was finishing his tenure in the position.

“For many of the major decisions in my life, I step back and evaluate the opportunity. I pray and look for validation and so that’s what I did in this instance,” said Ottmann. “I stepped back and considered the opportunity.”

“For me, it’s about impacting the lives of Indigenous students in positive ways and helping the First Nations University of Canada grow even more. So, it was an opportunity in that sense,” continued Ottmann.

In September, she officially became the new president, which she said was very exciting.

“For me, it was affirmation that it was something that was meant to be,” said Ottman. “I think that’s the difference between Indigenous and non-Indigenous leaders. Indigenous leaders really do consider the spiritual component of these positions. There was excitement but there was also the realization of the weight of the position.”

Although it has only been a few months, Ottmann feels things are going well in her new role. She thinks they are on the track to success with new units, such as the Indigenous Centre for Continuing Education, and the University Relations Unit.

Ottmann has big plans for the institution and for herself. “I hope to be of service to the entire community in my tenure,” she said. “That would mean we are moving towards self-determination and autonomy as a university. That is a significant goal for us as a university and it will take a lot of coordination and collaboration with the FSIN, the province, and the federal government.”