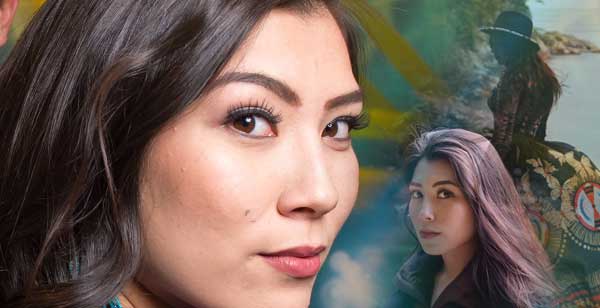 Erin Goodpipe, 27, is an artist, instructor, masters student, TV host -- and next on her list is a theatre festival in May in Sweden with her theatre group Red Sky Performance.

“A lot of my life is just saying ‘yes’ to things, and taking an opportunity, and really just doing the best that I could and learning as much as I could with these opportunities,” she said. Goodpipe plays Speck, an Indigenous child, in the play Mistatim, which is a reconciliation story about friendship.

“Playing the role of youth means you really have to get into the mindset, you have to tap into being a child again, and play, and how we interact as children,” she said, adding she thinks the play is asking people “to go back to these baseline ways of looking at relationships.”

Goodpipe has wrapped filming Season 8 of the APTN series “The Other Side,” which airs next fall, and is getting ready to co-host Season 9. It’s not the first time she’s hosted a program. Goodpipe started in film as the co-host of “RezX,” an Indigenous lifestyle show, alongside now-Chief Cadmus Delorme.

“I didn’t grow up thinking or even wanting to do any of the things that I am doing today, which I think says a lot of where I’ve come from, and where many Indigenous people and especially youth come from,” she said.

Growing up, Goodpipe just focused on making it through, while her family dealt with the impacts of colonialism, drugs, alcohol, and broken families. Family, both biological and ceremonial, is a large part of her inspiration.

“The love for my people and the healing of our people,” she said. “I once heard that as Indigenous people when we go into certain places we actually carry all of our families and all of our communities, we represent them, and that’s always been a driving force for me.”

She is working on a masters through the First Nations University of Canada that looks at Indigenous stories, and health and wellness through an educational lens. She also  teaches as part of the university’s Indigenous Education faculty.

While based in Vancouver, Goodpipe spends a lot of time in Treaty 4. She is dakhota winyan / anishinaabekwe from tatanka najin oyate (Standing Buffalo Dakota Nation) and recently returned from a 1.5-month trip, working with Regina’s Globe Theatre.

“It’s such an honour to learn from her and exchange thoughts and a passion for theatre and storytelling,” said Jennifer Brewin, artistic director of the theatre.

“She’s grace, and smarts, and she’s fierce and kind and funny, and I just want to be around people like that all the time.”