Comfort for clients and staff at Bourbon Barbershop 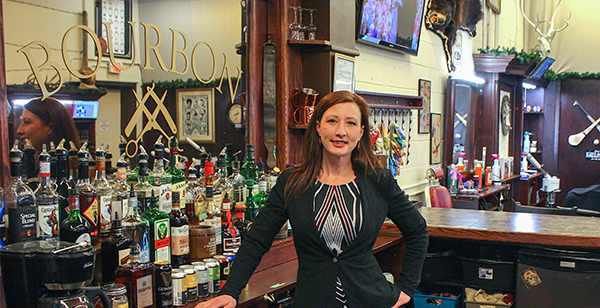 
Just inside Chantal Chapman's Bourbon Barbershop & Shaveclub, past a mountain of men's grooming products, is an oak-finished bar, handmade by Chapman and a couple of hardworking men she hired outside of a methadone clinic in Saskatoon. The bar, repurposed from an old skate-sharpening bench left from the building's previous occupants, might just represent the philosophy and spirit of Chapman's business.

“This place is about being yourself. It's about providing an opportunity for those who might not fit into society's cookie-cutter mentality. We embrace people's differences here,” said Chapman.

Bourbon, which is about to celebrate its sixth year in operation, was sparked by Chapman's discontent at how men are often treated like “cattle” in salons, as well as how hairdressers, who might speak or look a little different, often have trouble finding work.

“We have a Dene speaking girl here. She's from up north and applied at 16 different places and couldn't get a job because her accent was too thick. My employees speak Dene and Cree with their customers. I encourage them to speak their tongue, to wear ribbon dresses to work. If you're not a size six, or if you're too short for the tall chairs, we'll build you a platform to work on,” she said.

“I want to run a community barbershop where you treat your employees like humans. And I think the customers can feel that.”

Chapman, a Métis business owner from the small, Saskatchewan-Alberta border town of Empress, took a most unlikely journey before arriving in the hair industry. After becoming a teacher, she took teaching gigs both near and far, teaching in Saskatoon at St. Mary's Elementary School and City Park Collegiate, as well as overseas with stops in Russia, Holland, South America, London, and New York.

After returning from travelling, she decided to work in the oil fields near Fort McMurray, where she ran a road truck and bulldozer. Being one of the few females at camp, the guys started to ask her to cut their hair.

“I applied the principles of a bulldozer to a clipper and started cutting these guys' hair.”

Chapman not only discovered a love for cutting hair, but that she was creating genuine connections with the individuals whose hair she was cutting. She enrolled in hairstyling school in Regina, and after graduating, began making her rounds in the hair industry, gaining experience everywhere from a high-end women's salon to express-style men's barbershops, and began to cultivate her own philosophy for treating her clients.

“I saw how poorly men were being treated. There was no care factor at all. That's not what I got into hair for,” she said.

So, armed with little but fierce determination and a small start-up grant from Clarence Campeau Development Fund, Chapman found a space to rent in Saskatoon, and got to work converting it to her dream barbershop of a place that makes men feel at home. She hired a small team of down-and-out guys who were grateful for the work and let nothing stand in her way.

“Guys were stopping by and asking me what I was doing. They said 'you're crazy. You're going to fail'. I would just say, 'aright! Call me in a month for a haircut.'”

Chapman's determination, and people-first approach has certainly paid-off. Since opening, and for the last six years, she said they have been unable to keep up with the demand, turning away about 50-100 haircut per-day, prior to COVID-19.

“I think the reason my business was so successful is the 'law of attraction'. You get what you put out there.”

When COVID-19 hit, Chapman ensured her staff were taken care of during the hiatus. She gave them work helping with renovations, cleaning, and inventory. She made sure fridges were stocked and offered her staff moose meat for anyone struggling. And she even explored the possibility of opening a temporary casket factory in the barbershop in order for her staff to make money, all of whom supported the idea.

“I just tried to keep in touch with everyone and help any way I could. I think it really strengthened us as a core. Since coming back, everyone does feel that we are in this together.”

When reopening last summer, Chapman even dedicated the first week of operations to seniors and those with compromised immune systems, to ensure they weren't being left behind.

That sense of responsibility for her fellow human a conviction that seems to trickle through every area of her life.

“My world is just a big mish-mash of all these different pieces in one big bowl of chili. Whatever way I need to stir that chili to make my staff employable, to help their lives, I'll do it.”