A young advocate proves one voice can create change 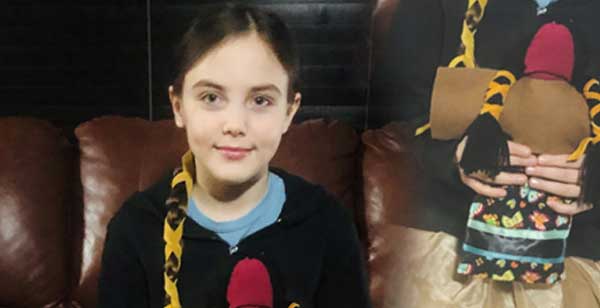 Isabella Kulak celebrated the very first National Ribbon Skirt Day this January, and continues to advocate for everyone to celebrate who they are. Photo supplied

Last January, Isabella Kulak from Kamsack, second eldest of seven daughters from proudly Indigenous and non-Indigenous parents Lana and Chris Kulak, made local, national, and international waves after being targeted for wearing a ribbon skirt as formal wear.

“When I was 8, I got sent one ribbon skirt; now I have 18 or 19,” said Isabella. “We did a class project where we have to search our names … when my name got searched so many photos popped up!” The quiet, close-knit family is not heavily involved with social media. But that hasn’t stopped Isabella from going viral.

She has been depicted in memes, posters, artwork and colouring sheets with logos like “Bella the Brave” and “Not all Superheroes wear capes, some wear ribbon skirts,” along with videos that have thousands of views.

“We’re very private people and we didn’t expect so many people to have such a strong voice for my daughter,” noted her father Chris.

He and his wife Lana are grateful for all the support they’ve received from across the country and around the world, including their school division after the initial incident.

Chris does not bear any ill will towards the EA who first reacted negatively towards his daughter and her skirt.

“Forgiveness is the strongest tool we have to heal with each other,” he said.

Important conversations and actions have risen from this opportunity, they noted, including Senator Mary Jane McCallum initiating the National Ribbon Skirt Day campaign, celebrated for the first time with huge community participation at Isabella’s school.

Skirts have been sent from nearly every province and territory in the country as well as sewing machines, fabric, and ribbons. A retired RCMP officer from Germany sent Isabella $200, and the RCMP made pins of an image she designed that says “Strong, Indigenous, Resilient.” Bella also sits on the RCMP’s women’s advisory circle of the Saskatchewan Indigenous Committee.

“I just want people to let their spirits shine with no regrets,” said Isabella when asked if she had any advice for others. Things that made her happiest was reuniting with extended family and seeing traditional wear and ribbon skirts become more common at her school. Bella has received notes, drawings, and zoom requests from students of all ages, up to university-level.

The family said the initial incident became an opportunity for a greater conversation, education, awareness, pride, and a rallying cry.

Lana has become a consultant and they are seeing many positive changes take place locally with language and culture opportunities. One of the family’s dreams is to travel to see everyone who has reached out to them.