A life-long fight to keep the Saulteaux language alive 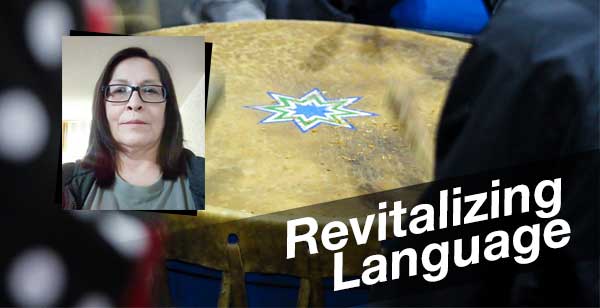 Lynn Cote, assistant professor of Saulteaux linguistics at FNUniv, is a leader helping to keep the language alive. Photo supplied by Lynn Cote

Lynn Cote was raised in the Saulteaux language and it was constantly reinforced by her family, who taught her how closely one’s native tongue is tied with identity. But school, in a non-Indigenous community, was a different story.

“The other kids at school made me feel embarrassed to speak my language,” said Cote. “The teachers as well. They made snide remarks, and you could never say anything back. You just had to take it.”

Rather than give in, she held on tighter to her language. In fact, Cote has spent much of her adult life proudly speaking and teaching the language.

From the Cote First Nation, she is an assistant professor of Saulteaux Language at First Nations University (FNUniv), where she’s been teaching for the last 17 years.

“It’s still rewarding,” said Cote. “I always tell my students how important it is to know your language, because that’s your identity. That’s who we are, and where we belong, and where we are going.”

Those foundations of identity were ingrained by her grandparents, who raised her, as well as her late aunt, Margaret Cote, who pushed her to study Saulteaux linguistics.

In 1990, Margaret Cote and two others were the first three to graduate with a linguistics degree from the Saskatchewan Indian Federated College (now FNUniv). Margaret convinced her niece, Lynn, who was studying Business Administration at SIAST, to change her degree to Saulteaux Linguistics. Margaret had been a leader in Saulteaux education and history, and Lynn thought it appropriate to continue her legacy.

“My family is why I’m where I am today,” said Cote. “Even my grandfather, he couldn’t read or write, but he would sit with me and help me (through the language). He pushed me. And would tell me, ‘I’m glad you’re doing this.’”

Saulteaux keeps giving back to her, said Cote. She is constantly learning by speaking with Elders, learning stories from different First Nations, and finding the subtle differences across the land.

But the language itself isn’t growing and that worries her.

“It’s hard to find ways to teach it,” she said. “Even in the homes, too many people are used to English. They think it’s easier. I always tell my students, don’t think in English, think in Indian. English is abstract. Our language is concrete, our words will stick to something.” The language has certainly stuck to Cote, who said she is continually learning about other cultures and languages in order to use their ideas in her own. And she still has hope the Saulteaux language will be the gift to others that it’s been to her.

“It deepens that understanding of yourself. It has for me.”