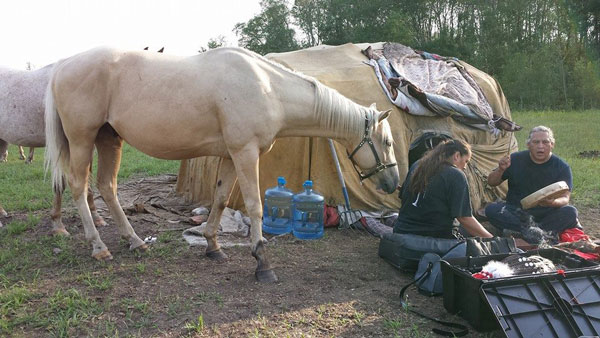 While the Saskatoon community prepares to host the Walking With Our Sisters commemorative/memorial vamps at the end of October, community members have begun “walking for our sisters.”

Emil Bell, a Cree Elder from Beauval, is walking 400 km to Saskatoon, to honour the missing and murdered Aboriginal women and ask for a national inquiry, particularly in light of this latest death, Tina Fontaine, a 15 year old who was found in a bag in the Red River in Winnipeg. His adopted daughter, Donna Gamble, had the same urge at the same time after Tina Fontaine was found – but she is driving to British Columbia to begin a cross-Canada walk there for all the missing and murdered.

Donna says, “I walk as a Daughter, Mother, Auntie, Kokum, & Chapan...I walk for them that are missing & murdered, lost, and them that are in pain. I walk in mourning.”

She can be followed on her Facebook page “AWASIS: A Sacred Journey" where you can also pledge, in memory of someone, to sponsor Donna as she begins her journey from BC to Sask.

Meanwhile Bell plans to reach Saskatoon by Saturday August 30th, and is inviting people to join him. He left Tuesday morning from the Beauval forks heading towards Green Lake. Wednesday morning he will head towards Big River, and he hopes to be heading towards Prince Albert Thursday. By Friday he plans to be within striking distance of Saskatoon, entering the city Saturday afternoon.

“At this time, I'd like to humbly put out an invitation to the Mothers, Aunts, Sisters, GrandMothers, and other family members to join us on the final leg of the Walk. This is also an invitation to non-Indigenous People. As we speak, arrangements are being made for a pipe ceremony and a feast and a forum will be made available for the relatives of the "Missing and Murdered Indigenous Women" to share their stories with us,” Emil wrote earlier this week. “We will also welcome People to join us on the walk, even if it's for a short walk or through their own communities. As soon as I get the plans for the last leg of the walk, I'll post it on my Facebook.”

Emil’s cell, for texting, is 1 306 202 7528, and once he is past Big River, welcomes phone calls. His e-mail is piwapiscus@gmail.com. He notes that when his own mother was buried, he was ten years old in the Beauval Indian Residential School, and not allowed to attend the funeral. This impacted his own journey greatly until he received help from an Arapaho Elder and participated in ceremony. "An inquiry will more than likely bring closure to many if not all of these relatives of the Sisters who are missing and murdered. Seriously consider your involvement to get an inquiry for our Sisters. See you at the final leg of the Walk.”