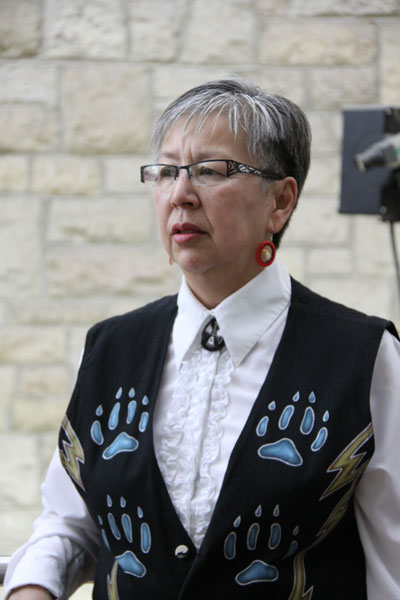 Lillian Dyck wants to ensure the high vulnerability of Indigenous women and girls to violence is specifically recognized by Canada’s Criminal Code.

The Saskatoon senator has put forward Bill S-215, which seeks to amend the criminal code so that the court system will be required to take into account Indigenous female identity during sentencing in convictions of murder, assault and sexual assault.

It is also hoped the legislation will serve as a deterrent to any potential perpetrators who believe violent crimes against Indigenous females will be prosecuted less severely.

“If a person is found guilty, then the judge has to take the female Aboriginal person’s identity into account to ensure that the sentence is appropriate and that it’s not minimized,” Senator Dyck says. “Or, it may even be a little bit longer because Aboriginal females are more vulnerable to being victims of assault or murder.”

Dyck says the idea for the legislation came to her some months ago when she started noticing bills being passed that recognize the vulnerabilities to violence under the criminal code of specific professions or groups but no such legislation existed for Indigenous women.

“I noticed last summer when I was looking through the bills we had passed there was one on protecting public transit operators, like taxi drivers. When I reviewed it, I realized the situation was very comparable (to violence against Indigenous women). So I thought, if we can amend the criminal code to protect taxi drivers and police dogs, then why can’t we do the same thing for Aboriginal women?”

Dyck adds perhaps the strongest part of the bill is that it should serve as a heavy deterrent to potential perpetrators of violence.

“It’s more than just the sentencing. It also sends a very strong signal, if it’s followed up with appropriate public education, to the public that this has to stop and it’s what they call in sentencing the denouncement. So that if the seed is planted in people’s minds that this has to stop, they’re not going to get away with it and they might even get a heavier sentence, that will in effect deter people from targeting Aboriginal women and girls.”

Bill S-215 passed second reading in the Senate at the end of January.

In order to become legislation, it will have pass a third reading in the upper chamber before passing another three readings in the House of Commons.

In addition, Indigenous women are three times more likely to be sexually assaulted.

Earlier in the year, the federal Liberal government launched a national inquiry into missing and murdered Indigenous women.