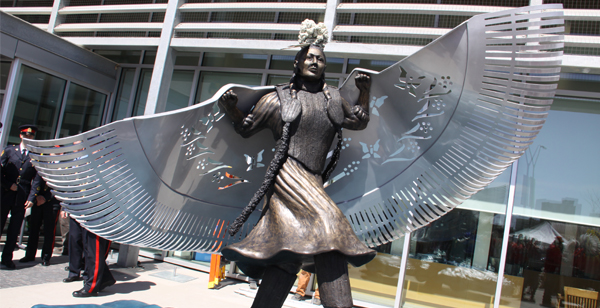 When Gwenda Yuzicappi visits Wicanhpi Duta Win, the Red Star Woman monument honouring Missing and Murdered Indigenous Women and Girls (MMIWG) in front of the Saskatoon Police Station, she feels a profound connection to it. The design was inspired by her daughter, Amber Redman, whose Dakota name was Red Star Woman.

Redman went missing 15 years ago, on July 15, 2005. The monument represents a person and story that never should be forgotten, said Yuzicappi.

“It gives me so much honour that my daughter continues to work mystically, continues to help families and bring awareness. This statue is an honour,” she said.

Yuzicappi shared her powerful story during a virtual ceremony, held by the Saskatoon Police Service (SPS) on Red Dress Day, May 5, which honours and brings awareness to MMIWG. The ceremony was attended by more than 200 people.

A lot has changed since she lost her daughter, who was 19 at the time, and a lot has yet to change, said Yuzicappi. 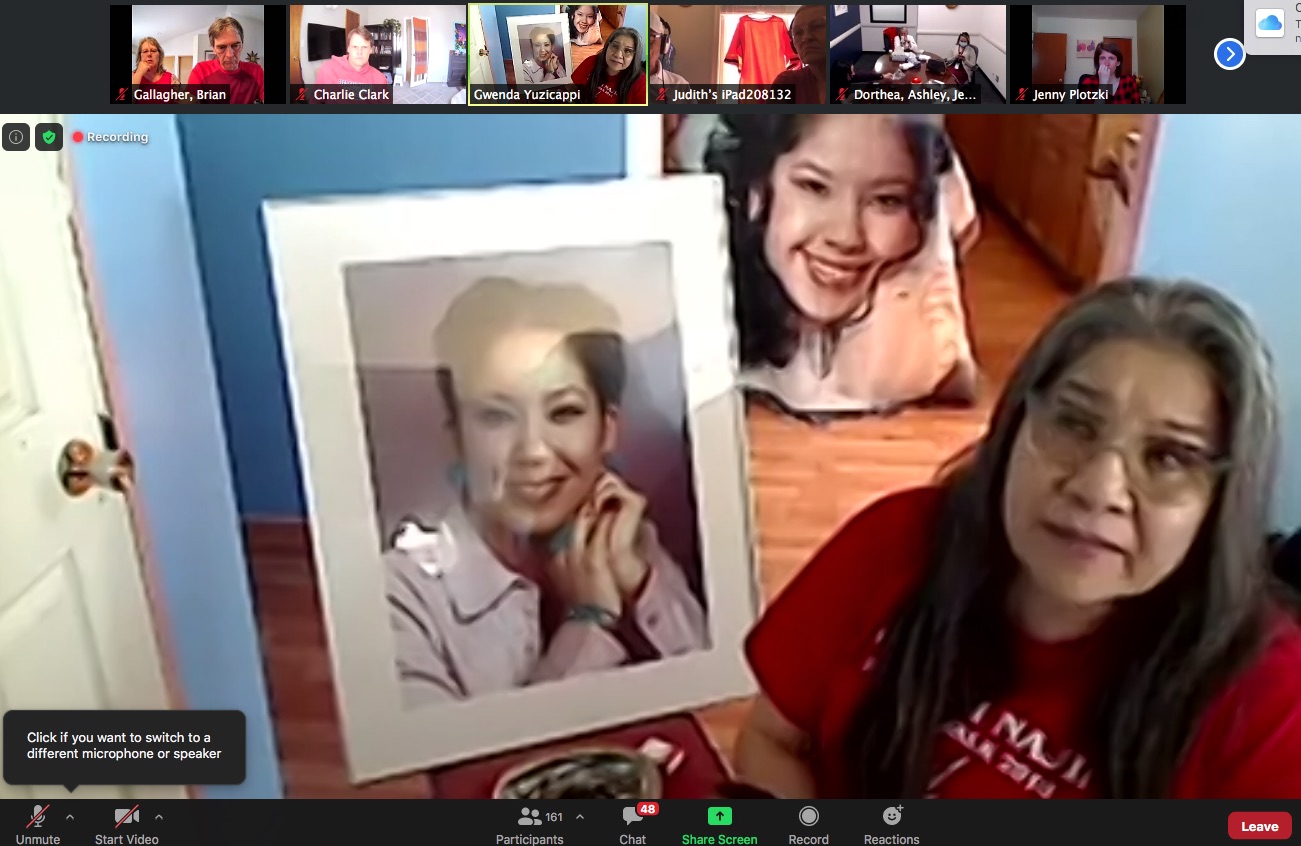 “I see the progress in the people, in the community, in the police, in different organizations. When our women and girls go missing, it’s so important to get that out in the media. To have the police understand. And I think they are. I see change from then to now,” she said.

For many years since losing her daughter, Yuzicappi has been providing support to families going through similar tragedies.

“When I go to their homes, I just listen. I don't share my story (the fist time). I listen to what they share with me. I think that's vital, for someone to go to another family's home, and not say anything, but just listen. I just tell them not to give up hope and that we cannot forget about our loved ones.”

The father of Megan Gallagher, a 30-year-old Métis woman who went missing on September 20, 2020, also spoke.

“We have no idea of ways to find resolutions for this. This is our new reality,” said Brian Gallagher. 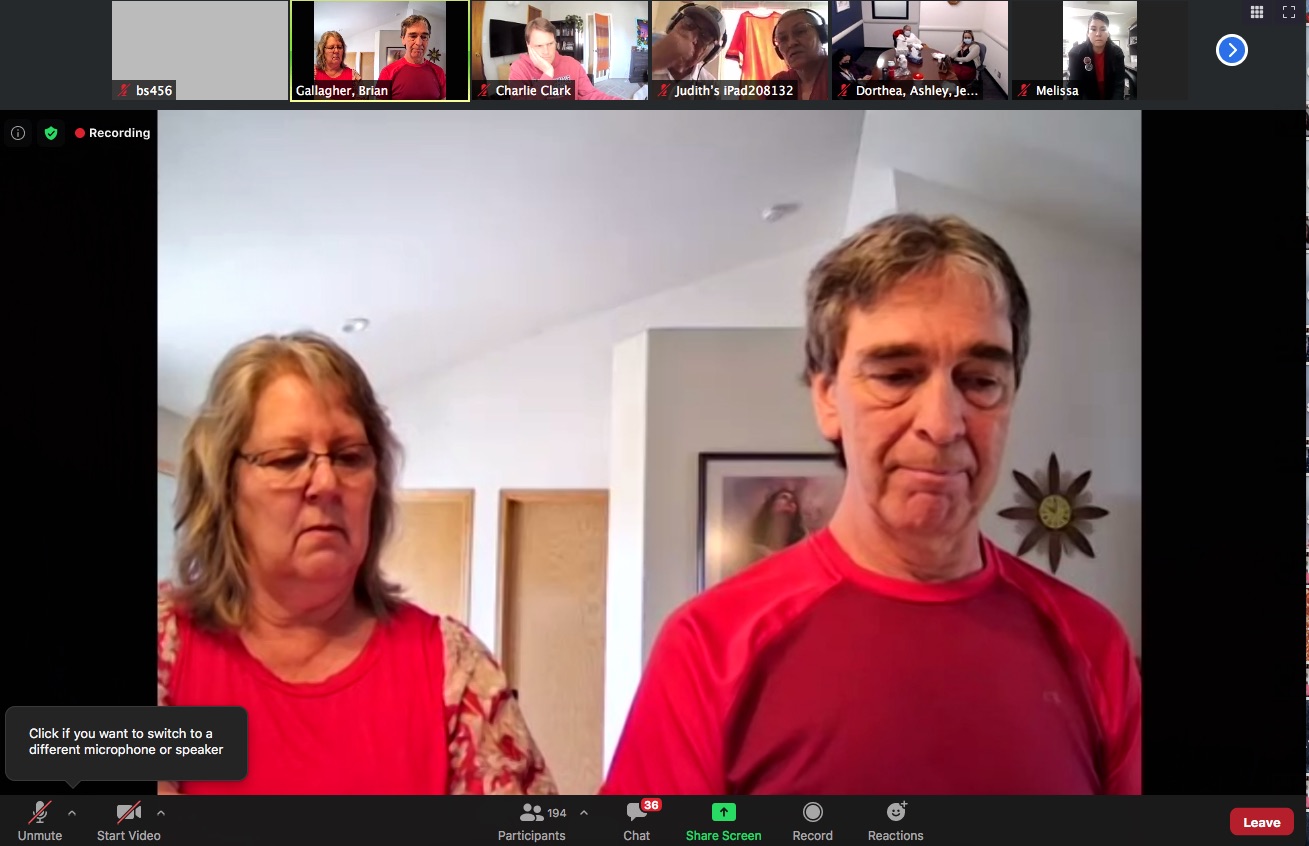 “For the longest time, it was hard to talk with people about this. But the reality is that that's where the answers are. And so, as we talk and share with more people, it becomes more evident that getting the information out there and keeping this as high-profile as possible is one of the most important factors.”

According to Reclaiming Power and Place, the final report of the National Inquiry into MMIWG, Indigenous women and girls are 12 times more likely to be murdered or go missing than any other demographic group in Canada. It is a glaring statistic that Gallagher wants everyone to know.

“This shouldn't happen,” he said.

Megan Gallagher's disappearance is being investigated as a murder by the SPS.

Cooper spoke about improvements made to the SPS around MMIWG, including dedicated staff and investigators, a provincial strategy, employing a missing Indigenous persons liaison, working with an Indigenous women's advisory circle, and developing Indigenous engagement and recruitment strategies.

“We believe race and gender should not be a risk factor,” said Cooper.

“I do realize we have to address a system feelings that is in our public institutions, but police do have a large role in improving the lives of Indigenous women,” he said.

Arcand said he gets calls weekly, sometimes daily, on how they can improve work on MMIWG.

“We can't do it by one person, one family. We have to come together and make this a priority,” he said.

“We have to do more. I don't want another generation to go through what our families are going through now.”