Two Liberal ministers say the government wants to ensure it gets a national inquiry in to missing and murdered Indigenous women right by seeking the necessary input from victims and their families. 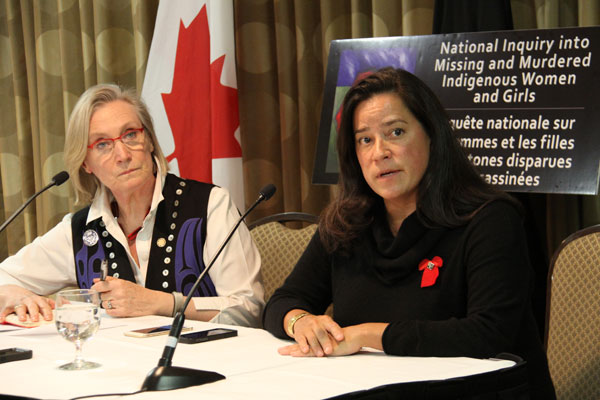 Justice Minister Judy Wilson-Raybould and Indigenous and Northern Affairs Minister Carolyn Bennett were in Saskatoon on February 10 as part of a pre-inquiry phase.

Previous government inquiries, such as the 2012 B.C. Missing Women Commission of Inquiry, have met with heavy criticism for taking too narrow a scope and failing to properly consult with those affected.

This is why Wilson-Raybould says the government believes it is important to seek the input of Indigenous victims of violence and their families before proceeding with the full inquiry.

“We are committed to ensuing that their voices are heard and are heard broadly,” she says.

Bennett adds it will be unlikely all affected parties will be completely happy once the inquiry is launched but the government will certainly do its best to listen to as many voices as possible.

“When the commission is launched, if the families can feel that they’ve been properly listened to, when they can see their fingerprints on the blueprint of the inquiry, we will feel we have done well,” she says.

The ministers are currently in the process of consulting with Indigenous victims of violence and their families in a series of closed-door meetings across the country.

Prior to Saskatoon, the government held pre-inquiry meetings in a number of locations including Ottawa, Vancouver, Winnipeg and Regina.

Wilson-Raybould and Bennett say they are hearing a number of things in the meetings including a significant amount of hurt, pain and mistrust of public institutions.

Bennett says both police and media have not fared much better in the eyes of victims and their families.

“The role of the media is upsetting to people,” she says “For children to find out in the media that a woman was stereotyped and they didn’t even say she was a mom is pretty hard for children to hear a report of a murdered mother like that.”

Saskatoon Police Chief Clive Weighill, who is also the president of the Canadian Association of Chiefs of Police, is on the record as saying he is not in favour of a national inquiry because he believes it will delay a concrete action plan to deal with the underlying issues that make Indigenous women more vulnerable to violence.

However, Bennett says she doesn’t believe the government needs to choose between one or the other.

The Liberals announced the national inquiry shortly after getting elected last fall.

They have committed to launching the full inquiry sometime in 2016.

The whole process will take about two years and cost $40 million.