“I am not untouched by missing people,” noted Harry Lafond of the Office of the Treaty Commissioner, opening speaker for a Reconciliation themed night focused around missing and murdered Indigenous women and girls. One of his cousins disappeared in the 1950’s, last seen climbing aboard a train to go to Prince Albert from Marcelin. Nobody has been able to say what happened to her in the past 60 years. His best friend also went missing in 1975, and has never been found.

He spoke of how people have been treated since the treaty-signings, where the dream and vision of sharing the land in harmony and being related has been thrown out of balance by greed, power, and money. 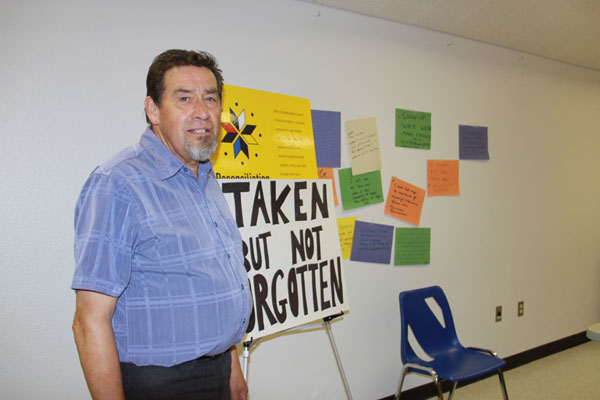 “Not just the Indigenous people but the settlers as well — it has thrown everything out of balance, and as soon as something is out of balance you experience unwellness. Pain. Suffering. Behaviour that is intended to hurt. That lack of balance is what we’ve inherited from the Indian Act, the Residential Schools that took one sentence of the treaty and twisted it to suit the interests of the more powerful,” he explained, adding that this means a lack of respect for all people, and respect between genders. “Women had a very strong role to play in the democracy.”

Lafond suggested we must return to the grandmothers’ voices again, so that men can embrace an Indigenous society where we complement each other, not dominate, oppress, or abuse, so as to rebuild families and live out the real dream of the treaties. 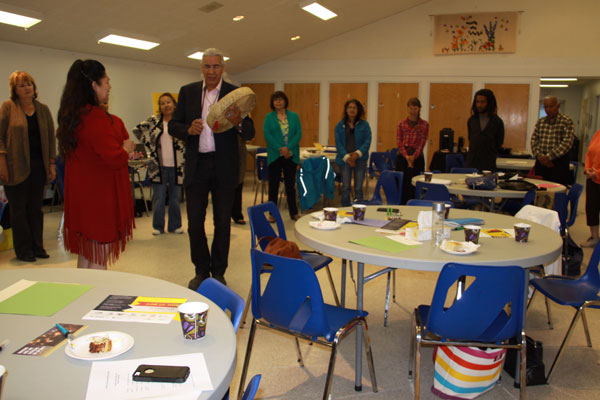 After Lafond spoke, Patricia Whitebear, Darlene Okemaysim-Sicotte, and Myrna LaPlante all shared stories as relatives of disappeared or murdered women.

“This is my forever lifetime commitment, my call of action,” noted Whitebear. “It’s to bring awareness to yet another injustice of Indigenous families. We all have family albums. Just imagine your family with one person missing every holiday, Christmas, that person is not there. No one should feel that pain.”

Okemaysim-Sicotte tied the issue directly into the legacy of Indian Residential Schools.

“Suffering from the IRS seeks to share the harsh reality and the links to colonization including the IRS and social environments. Many women today continue to be challenged by safety and survival.  Colonial policies have attacked culture, way of life, way of being. Traditional roles were undermined along with the dispossession of traditional territories and roles and responsibilities, leaving women out of decisions,” she noted. “Genocidal policies are linked to the disappearance of hundreds of women.”

LaPlante spoke about the life and contributions of her Aunt Emily who went missing at age 76 in 2007 and has yet to be found.

“Once she went missing, it was total disbelief, how can someone go missing from their safe rural home and just vanish?” asked LaPlante. “We need to honour these memories of these people who are missing and murdered and we need to remember the things that they have done, the contributions they have made during their lifetime, whether it was long or short.” 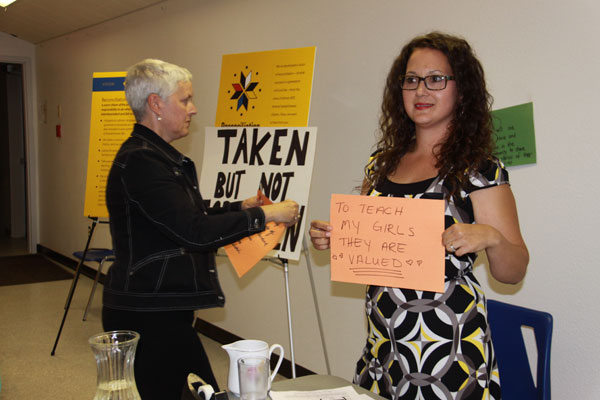 The gathering then broke into small groups to discuss reconciliation, and make resolutions on taking action, with opportunities to take “selfies” of their resolutions next to the OTC Reconciliation posters, or the “Taken but not Forgotten” poster board created by the organizers of the evening, Iskwewuk E-Wichiwitochik. The evening ended with a round dance led by Joseph Naytowhow and his sister Violet.