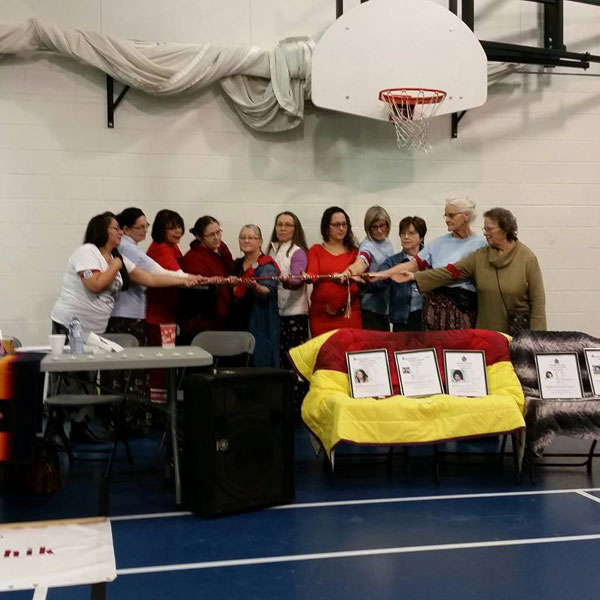 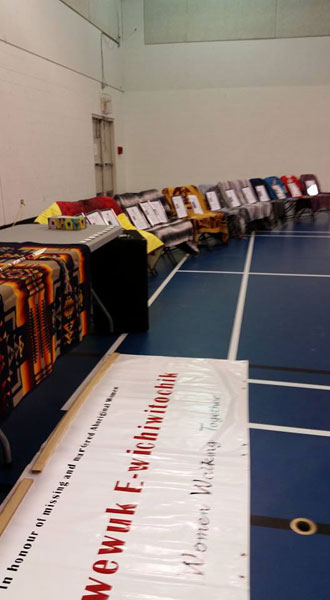 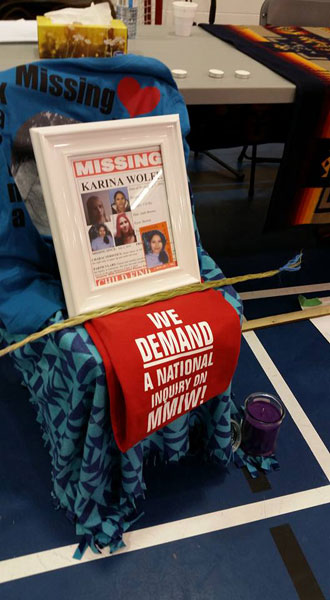 Iskwewuk E-Wichiwitochik (IE, Cree for “Women Walking Together”) had a sombre celebration on Saturday, November 28th, commemorating a decade of support and activism on behalf of missing and murdered Indigenous women and their families. Co-chair Myrna LaPlante spoke to the media about the recent discovery of the remains of Karina Beth Ann Wolfe, who has been missing since July 2010 at age 20. Karina’s mother Carol, a very active spokesperson since the disappearance of Karina, was scheduled to be part of the ceremonies but due to the heart-breaking developments was not present. Part of the activities were amended to include a donation box for funds for the Wolfe family, and a card-writing activity to express condolences and support during this time. Donations are still welcomed for Karina’s family as they prepare for funeral and court expenses.

After an opening pipe ceremony led by Elder Steve Morningchild, father of Calinda Waterhen who was murdered in 2003, the day continued with emcee Chris Sicotte. Judy Hughes spoke of the importance of continuing advocacy, while Jorgina Sunn lifted her voice in beautiful song. Darlene Okemaysim-Sicotte shared on behalf of IE, and Kay Lerat brought greetings and solidarity from FSIN. Helen Smith-McIntyre brought greetings from Amnesty International, but also spoke of her settler heritage and her commitment to work against a colonial history that has displaced and violenced Indigenous peoples of all ages and genders.

“I wish I could say that there were no more missing and murdered Aboriginal women...I hope the day will come when we will be able to say that,” said Smith-McIntyre. “But the sadness of our journey is women are still going missing, women are still being murdered. But I’d like to think we have made progress...the conversation has broadened, whole communities are involved in the conversation.”

After a feast, the afternoon continued with one of IE’s initiating and founding members, Monica Goulet, sharing the mic with Crystal LaPlante of Saskatoon Tribal Council to speak about the monument to the missing and murdered, which will be installed in front of the new police station.

“The monument shows a beautiful Indigenous women dancing,” noted Goulet, talking about the intensive community and Elder-based approach used in selecting the final monument, which shows the beauty and strength of Indigenous women. Goulet also acknowledged the presence of Gwenda Yuzicappi the mother of Amber Redman whose body was discovered in 2008. Amber was a beautiful traditional dancer and culturally strong young woman.

Dr. Priscilla Settee delivered a brief afternoon keynote on IE and the issues.

“It is incumbent on government structures and institutes of higher learning to take research and development cues and directions from the Indigenous and impacted communities,” noted Settee. The afternoon concluded with spelling out the various activities of IE with placards, and then more drumming and honour songs.

Carol Wolfe spoke to media on November 30th through an interpreter.

"Karina was taken from our family too early in her journey of life, our family is suffering with a heavy heart we will never get to see her again," Carol said. “"The last memory I have is Karina saying, 'I love you mom and I will be home later.' Karina never got to come home. This is something that should never have happened.”

On November 10th, Jerry Constant turned himself into the police station with his story of what had happened, and the location of Karina’s body, which was then found within a few days northwest of the city in a marshy area near the airport boundary roads. When DNA confirmed the results, the family was notified. Constant was arrested with charges of second degree murder and indignity to a body. His first appearance was made Monday, November 30th by video to a packed courthouse, and the Crown has requested a mental assessment be made. His second appearance is scheduled to take place December 8th. Visitation of Karina’s body was held Tuesday, December 1st in Saskatoon, then the wake and interment took place at Muskeg Lake Cree Nation later in the week.

“Carol has been a tireless advocate on this issue, she really took the lead in action all along, and IE followed her lead as much as possible. She never gave up hope for Karina, and she is a hero in her own right,” noted Darlene Okemaysim-Sicotte.