Over 200 supporters and family members in Saskatoon took part in one of 100 national Sisters in Spirit events on October 4th, for the first time since the national inquiry has been launched.

After walking through the streets with signs accompanied by drumming and singing, supporters returned to White Buffalo Youth Lodge for soup, a program, and a giveaway by organizers Iskwewuk E-Wichiwitochik (Women Walking Together). 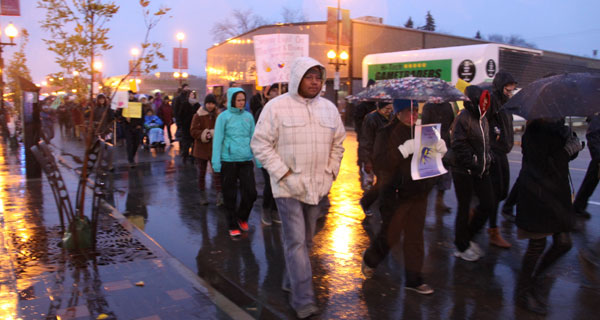 Family members shared their experiences, and their hopes for the outcome of the national inquiry. Danita Big Eagle and Patricia Whitebear spoke about their missing loved ones and the pain the families experience in their extended absences.

“I understand and pray for all the other families, to heal whichever way you can,” said Whitebear. “There is a help line out there for anyone, whether you’re residential school or a sixties scoop or missing and murdered family members.”

Hope for Wellness runs a 24 hour helpline in Ontario —  1-855-242-3310 — and anyone experiencing challenges or depression can call the number, she told those gathered.

“The inquiry has been a long time coming,” noted Big Eagle, adding that it was important the families be put first in the process. Whitebear added that the process was going to require careful attentive listening to those nearest the issue.

Carol Wolfe spoke on behalf of her daughter Karina Bethann Wolfe, whose body was found in November of 2015 after missing for over five years.

“None of us gave up,” said Wolfe through an interpreter, thanking the many supporters over the years. “It’s been very very difficult — I have a space in my heart now that Karina’s gone.” 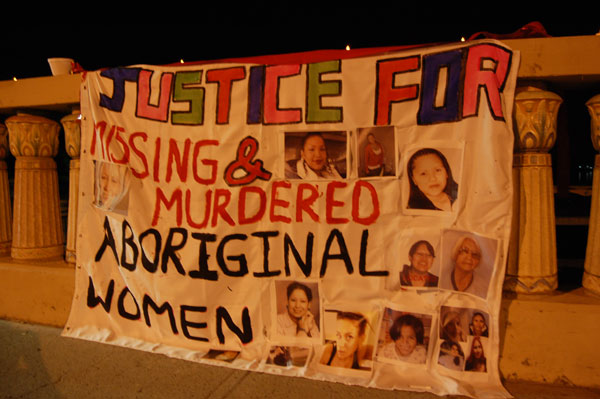 Wolfe shared memories of the last time she saw her daughter, the emotional process of reporting her as missing, and the harrowing court process once the murderer was charged.

“I would watch through the rain, the snow, and the heat for my daughter,” noted Wolfe, describing how she carefully picked out the casket once her daughter was discovered. “I did stand up to her killer and told him “You murdered my daughter”...she was a strong woman, but he killed her.”

Monica Bosse and Faith Bosse spoke on behalf of Daleen Bosse Muskego’s family, thanking the longtime supporters through the trauma of a long missing case, and the trauma of trial once her body and a conviction was obtained. Faith was only a toddler when her mother went missing, and is now a young woman. She expressed her gratitude to the many supporters through the long process.

Jeanette Gamble’s mother has been missing since 1964, when she was five years old.

“This is still a hard journey for me,” said Gamble. “We don’t have answers...When they took my mom, they took my life away. They took my language, the skills, the values, of everything that a daughter is supposed to learn.”

Gamble still hasn’t given up hope that one day her mom will be discovered, living or not.

“It really is hard when you feel that no one cares, but as I look around here I can see that there are people who care, when we stand up and tell our stories of what happened.”