Pauline Okemow lost her sister in 1989 and found little by way of answers at the time. She hopes a national inquiry will bring her family, and others, closure.

Marsha Okemow was only 16 years old in 1989 when she was murdered at a house party in Prince Albert. Taken from the family at age 3 because their mother couldn’t speak English, Marsha survived the foster system, but the free spirited and trusting teen found her demise at the hands of a 19 year old Indigenous female who stabbed her nine times front and back.

After the murder, the family had difficulty getting information from the police and the coroner.

“Our family had no voice then,” said Pauline Okemow who wants justice for her little sister. She spoke at a press conference hosted by the Federation of Sovereign Indigenous Nations (FSIN) after the announcement of the National Inquiry into Missing and Murdered Indigenous Women and Girls in Canada. “We need justice, closure and healing.”

The FSIN also welcomed the Commissioners and are optimistic of the process but did have a few reservations about the terms of reference. 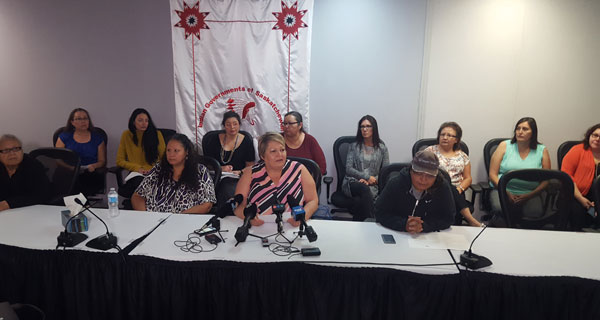 “We urge the Government of Saskatchewan to be comprehensive in the Order-in-Council authorizing the Inquiry to examine all provincial institutions including policing, the child welfare system, the coroner’s office, and adult and youth correctional facilities,” said Vice Chief Heather Bear. “We are pleased with the inclusiveness of the Commissioners named, their ability to travel to hear the voices and insights of families and stakeholders, and the examination of social, economic, cultural, institutional and historical causes of violence.” 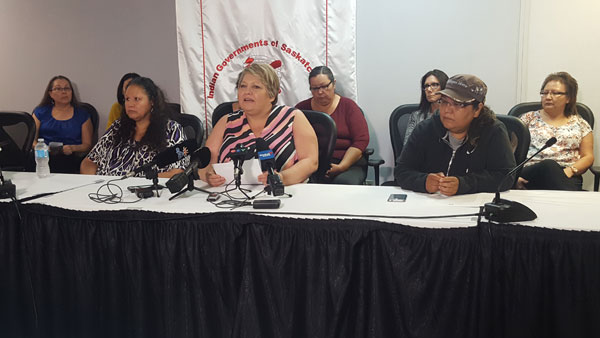 Carol Wolfe also attended the press conference and spoke through a translator of her daughters Karina’s story. Karina was missing for five and a half years and was eventually found out by the Saskatoon airport.

“When she was missing we looked, we marched, we discussed and we met. When we found her remains she would have been 26. I loved my daughter so much. I went to the spot where they found her and cried. We need to stop violence against women. I know this needs to happen.”

Vice Chief Bear holds the portfolio for missing women and girls and despite the Inquiry, she still has concerns about safety in the community. “It is my hope and prayer that by doing this we can bring it to an end. The root causes are the residential schools and the oppression of colonialism. This has affected our families,” said Vice Chief Bear. “We hope the Inquiry brings concrete recommendations and that they listen to the families and our elders. Those are the experts.”